You are here: Home / Community Voices / Roadblocks to higher education
Share this... 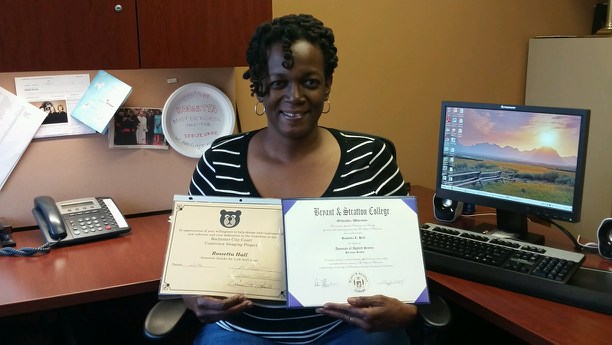 Ex Fabula Fellow Rossetta Hall originally shared this story on Nov. 24, 2015, at a Zeidler Center for Public Discussion Community Conversation attended by more than 120 community members. Ex Fabula Fellows share personal stories to inspire community-led dialogue around some of the most pressing issues in the Greater Milwaukee area — segregation, and economic and racial inequality.

May 2011. A warm sunny spring day. Robed for graduation and success. This was a long time coming, you see. Before I made it there I struggled with poverty, growing up without a father, the traumatic events of being a foster kid, being raised in the projects by a single mother of six with very little education who suffered a mental breakdown from the abuse of our father, being a single mother myself, marriage and divorce. However, that would not stop me from arming myself with determination to embrace the grander American dream of education for me and for my children’s future.

In 1989 I began working for the New York State Unified Court System. During that time there were only a handful of African-Americans. My first position was an office assistant working in the court’s criminal division records room, Monday through Saturday. I ensured all new arrest cases were properly prepared for court arraignment within the proper time periods. After a few years in that position I would take two more civil service examinations, passing both of them and ranking in the top three on the examination list. Within the next 10 years I was promoted to senior office assistant and then to principal office assistant as I continued pursuing my career in the court system for 16 years.

During my tenure I learned many different facets of the courts: small claims, large claims, city and supreme courts, criminal and civil divisions, specialty courts (drug court and mental health). I was a cashier, data entry clerk, court assistant, and accounts receivable clerk. Eventually, I became one of those go-to persons to be backup or replacement in various areas of the court. My thinking was that if I learned as many areas of the court as I could, my superiors would view me as one of their valuable employees and would appreciate my desire to make the court system a fulfilling career. This is why I thought they would be willing to support my efforts to engage in more training and/or a better education.

After several years of working in the system continually proving that I can do any task set before me and seeing many of my white co-workers promoted without taking examinations, but through higher education, I thought, “It’s time for me to get an education or else I will be forever taking civil service exams.” Some of the jobs I wanted to apply for were labeled “non-exempt,” which meant you didn’t have to take a test to be promoted, but you definitely needed a degree or to be in a “clique.”

So one day I went to my supervisor, the Deputy Chief Clerk of the City Court, and told her that I wanted to go back to school full time, and requested to work through lunches on the days I would have classes so that I could leave earlier. I needed to ensure I made it to class on time and that my kids were in a safe environment, fed and a sitter was with them before I went to class. Her response was, “You know it will be hard for you to go to school full time being a single mother of five and we will not be able to accommodate your request for changes to your work schedule.”

I thought to myself, “Wow, I at one time helped this same supervisor create what they call small claims mailers (which exist today), and she even gave me a certificate of appreciation for all my hard work.” That is why her response shocked my very soul with disappointment and anxiety that I would never get one of those great jobs or a degree working here. I knew that I had to get a higher education because I was an African-American, a woman and a single mother of five. I did not want my kids to grow up in the same kind of America I did, filled with oppression because of cultural differences. I wanted my children to see that education plays a major part in our lives and without it you are going nowhere fast.

What was very discouraging was that sometime later I observed a white co-worker doing her homework at her desk, going to school, getting her education and no one seemed to mind. Except me. I was the only one that felt bamboozled out of getting an education and was beginning to believe that I should be thankful I even had a job. This once again made me feel disappointed, dismayed, embarrassed for not having a degree and pretty sure that I would never be able to get one. I knew I must work for the betterment of my family, or my children would surely grow up to believe that being an African-American living in poverty and being uneducated was the normal American way.

In 2005 I moved to Milwaukee armed with determination, returned to school full-time in 2006, got my associate’s degree in paralegal studies and continued on to get my bachelor’s degree in business administration in 2010, graduating with high honors, summa cum laude. I began working for the Milwaukee County Court System in 2008 and, as I did in New York, I learned many different aspects of the courts: small claims, large claims, criminal, paternity, injunction, probate and divorce. Equipped with those skills and a higher education I advanced to the Wisconsin Supreme Court, Court of Appeals, where I presently work. I continue to be a lifelong learner because that is what my history has taught me about my future: keep learning, stay determined, and let the word “no” be your guide to greater success.