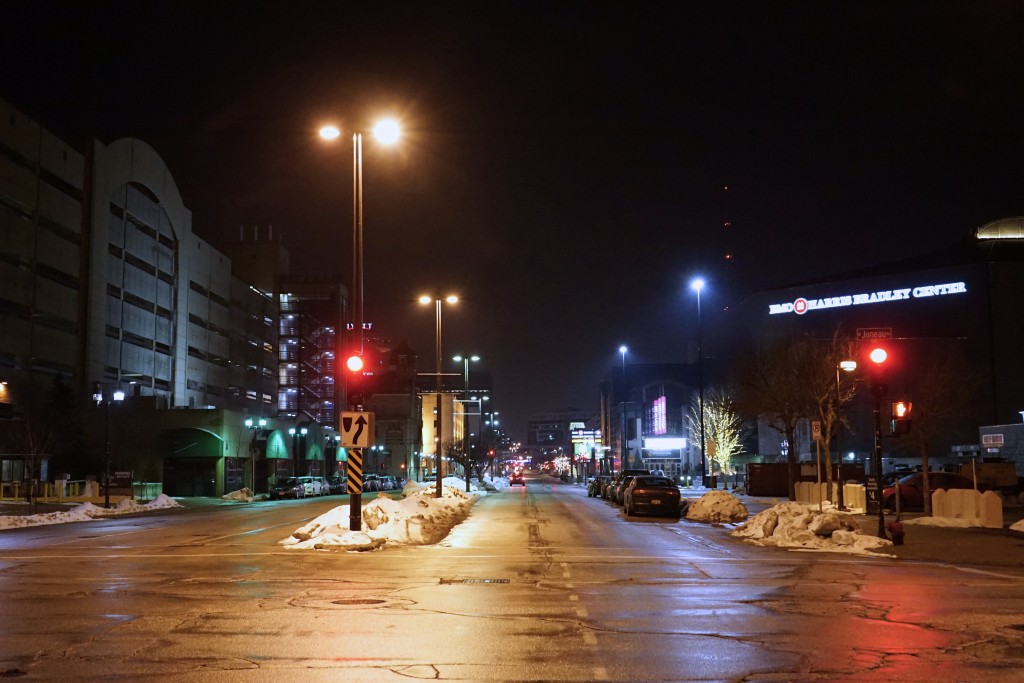 I grew up hearing about “clean government” in Milwaukee and Wisconsin. I was proud that this region was reportedly run by honest people who made the greater good a primary concern — not by politicians making backroom deals.

That pride got shattered recently. I was stunned to read about another closed-door deal to give over public assets to the Milwaukee Bucks. This time, City of Milwaukee officials executed an end run. Citizens had been assured since September that there would be a thorough public process about a proposal to close one block of North Fourth Street. The closure, adjacent to the new arena, would create what’s called a “pedestrian mall.” However, this mall/plaza will overwhelmingly benefit the Bucks, while city taxpayers foot the bill. It will significantly increase the size of the Bucks “entertainment complex” where they plan to open “the country’s biggest outdoor sports bar.”

American pedestrian malls have not thrived. Ninety percent of them have failed since 1959. Nearly all have been converted back to traditional streets. They succeed only when foot traffic is constantly intense.

Ald. Robert Bauman warned last fall that cities should not shred their foundational street grid and forever hamstring planning options by capriciously dissolving streets. He proposed closing Fourth Street only for special events, a standard approach in many cities. This leaves a thoroughfare intact for the most part.

I was among numerous signers of a letter urging officials to take notice of likely negative impacts of this unneeded closure, including on economic development north of downtown and traffic patterns and congestion. Ceding public space to private control always has serious ramifications.

So I was dismayed to learn on Jan. 6 that a deal had been finagled to barricade Fourth Street — without even the pretense of public review. News of the pact surfaced two weeks after a Dec. 22 private meeting between elected city officials and the Bucks. A reporter learned by chance of this stealth holiday maneuver when inquiring about another matter.

It seems Milwaukee backroom deals to dispose of the people’s assets are now business as usual — and can be hidden from media for weeks on end. Other schemes to hand over public assets to the Bucks were also secretly arranged. Mayor Tom Barrett agreed to provide a city-owned parking structure built for $30 million, land appraised for $1 million and $47 million in cash. Sufficient Common Council votes to rubberstamp that deal were reportedly pledged before it was announced. Those giveaways were on top of 30 acres given to Bucks owners by the city, county and state — to exploit as they choose. According to state auditors, taxpayers will pay $400 million for the Bucks Arena, with Milwaukee County residents covering the lion’s share.

In November, Turner Hall’s board secretary tried to voice concerns about Fourth Street’s fate to the city’s Plan Commission. Turner Hall, a 134-year-old venue hosting cultural, fitness and civic programs as well as private events, is next to the planned dead-end street. Interrupted mid-sentence, George Affeldt was told he should address this civic issue when it went before the Common Council. In December, Bauman promised that the council would discuss Fourth Street “in a couple months” with opportunities for “extensive commentary and public testimony.”

Now it appears there will be no such hearings of any consequence. Citizens were unceremoniously cheated of their right to “fight the good fight.” Efforts to keep Fourth Street open will be moot, in all likelihood. The dubious “compromise” Common Council members forged is that the city can more easily reopen the street, if the pedestrian mall indeed fails.

After the Bucks were lavished virtually everything they demanded through a 12-3 Common Council vote in September, ever-affable Mayor Barrett told arena-deal opponents to “stay involved”; that he appreciated their advocacy. For those words to have meaning, attempts at civic engagement cannot be fools’ errands.

Visiting billionaires are manipulating all major decisions about 30 once-public acres they now control. Our city — and democracy — is too precious to abandon hope that citizens’ views can influence land-use decisions. For the good of the city, some of that land should become high-quality public space that serves community needs, as defined by citizens, not merely to benefit the Bucks owners.

Backroom deals sully clean and transparent government. It’s no way to foster a vibrant neighborhood, much less a thriving — and just—city.