You are here: Home / News / Arts and Recreation / Korea Konnect creates a conversation about culture throughout Milwaukee communities
Share this... 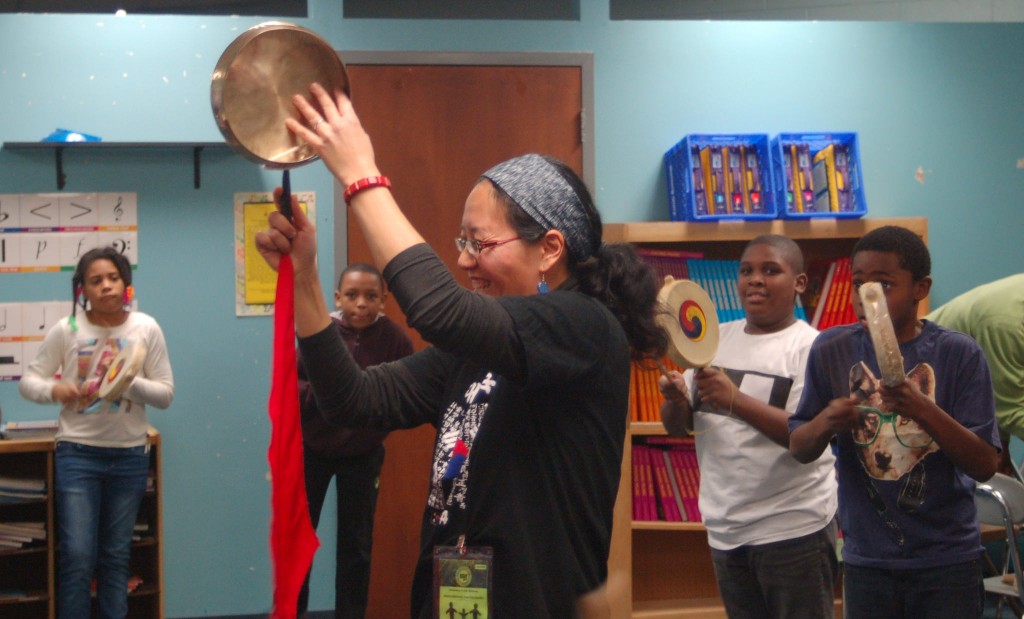 Saehee Chang, founder of Korea Konnect, has been teaching traditional Korean drumming since 2009. Currently she has a drumming residency at the Starms Discovery Learning Center. (Photo by Morgan Hughes)

Saehee Chang is sitting on the floor beating a wooden, hourglass shaped drum called a Jang-gu, counting the rhythm out loud. A class of nearly 30 fourth graders count and beat their drums along with Chang, learning about her culture through a traditional form of Korean drumming.

Chang, a Korean-American, came to the United States in 1981 at 12 years old. She was born in Seoul, South Korea, but lived in Vietnam and Nairobi, Kenya for much of her youth. Chang said that this experience developed her interest in cultural education and led her to start her business, Korea Konnect, in 2009.

Korea Konnect’s goal is to connect American and Korean culture through traditional Korean drumming and cooking. 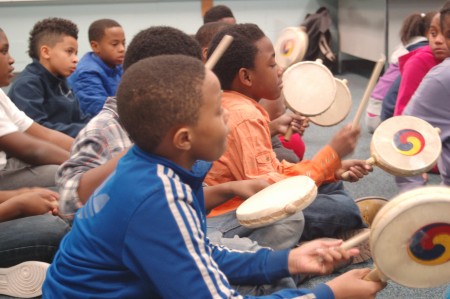 “The fear of “the other” is eliminated if people have a basic cross-cultural education,” Chang said. “The first question students ask me is ‘are you Chinese?’ I use it as an educational tool and conversation starter about culture. These students really want to learn.”

When Chang began college at the University of Illinois Urbana-Champaign she started to investigate her own heritage. She said that this is when she fell in love with the traditional Korean style of drumming called Poongmul, and decided to spend a summer in Korea to learn the art.

One way that Chang connects her culture to her students is by mixing Poongmul with the rhythms of traditional drumming from other countries.

“Drumming connects everybody. There’s no culture that doesn’t have drumming and percussion,” Chang said.

One of the many groups that Chang works with is the Young Scientists Club at the Washington Park branch of the Urban Ecology Center.

Erick Anderson, the center’s community programs coordinator, said that Chang has a natural ability to engage with kids in a positive way.

“I’ve never seen kids get interested in trying new foods that they would normally find gross. We have kids fighting over who gets to eat the vegetables,” Anderson said.

Chang has taught at several MPS schools as well as at community centers and the Milwaukee Public Market. Most recently Chang began a drumming residency at Starms Discovery Learning Center, 2035 N. 25th St.

Dr. Janice Pugh, a fourth-grade teacher at Starms, said she’s glad her students get the chance to learn from Chang. “The experience is exciting because they are learning about a different culture and learning the language of another culture,” Pugh said.

In addition to teaching drumming and cooking classes, Chang offers translation and interpretation services to Korean-Americans who are struggling to understand medical, legal and educational systems in the United States. She said that she can relate to them because she has been in their shoes.

Chang also makes homemade Kimchee, a Korean-style slaw, and sells it to local farmers’ markets. “For me, [selling Kimchee] wasn’t about making money,” Chang said. “It was really about getting to know the farmers and the vendors and talking to market goers and how everybody is so excited about food.”

Everything she does comes from her love for people, Chang said. “People are so fascinating. I think through my drumming, my food, my language, I really engage with them and they really want to learn about me.

“I feel like I have a purpose in life. I’m not changing the world but I’m making a small difference.”

Editor’s note: This article has been updated to correct the spelling of Erick Anderson’s name and his job title.