You are here: Home / Home / Carousel / Near West Side stakeholders optimistic about initiative to improve neighborhood
Share this...

Ten years ago, Laura Sue Mosier worked near a “crack corner,” as she calls it, in the Concordia neighborhood. These days, thanks to the work of residents and more recently, Near West Side Partners (NWSP), she trusts her neighborhood enough to leave open the front doors of her 19th- century Victorian-style bed and breakfast.

“The Near West Side initiative is trying to better Concordia in so many ways,” said Mosier, part owner of the Schuster Mansion Bed and Breakfast, 3209 W. Wells St. Although she and her husband don’t have time to be directly involved, she added, “We definitely agree with their goals and are fully supportive of their efforts.”

Since its launch last January, the partnership has made strides toward its goal, said Rana Altenburg, vice president of public affairs at Marquette University and president of the Near West Side Partners board of directors. In April, for example, the anchor institutions — Aurora Healthcare, Harley-Davidson, Marquette, Miller Coors and Potawatomi Business Development Corp. — collectively pledged $1.5 million to improve the area, Altenburg said. In October, the partnership created a $1.6 million fund to finance community development projects, she added. 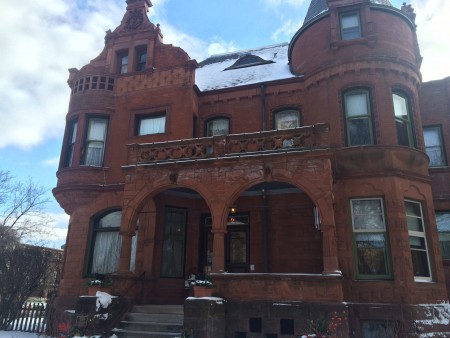 The owner of Schuster Mansion Bed & Breakfast in Concordia supports the neighborhood revitalization efforts of Near West Side Partners. (Photo by Julie Grace)

The media coverage generated during the past year seems to have helped make area residents, business owners and employees aware of Near West Side Partners.

Five O’Clock Steakhouse managing partner Stelio Kalkounos said the restaurant is among the businesses that have already benefitted from the initiative. The steakhouse, which has been in the community since 1942, received two façade grants through the nonprofit. The owners used the money to improve exterior masonry, add lighting, install a security camera system, repave the parking lot, improve the landscape and install a patio, Kalkounos said.

“(NWSP executive director) Keith Stanley was a wonderful partner to guide me through the grant process,” he said. “The money helped us preserve what we have here and enhance our visibility. We’ve made it a point to reinvest and commit to staying (in the neighborhood).”

Bryant Zimmermann, director of facilities and logistics at Penfield Children’s Center, has also seen the effects of the initiative. He said he has observed less crime in the Avenues West neighborhood, pointing to an apartment building just three blocks from the center that was recently put into receivership because of drug dealing. Zimmermann said he is especially thankful for the leadership NWSP has taken to assist Penfield in situations like this.

“A vast majority of our kids live within a five-mile radius of here,” Zimmermann said. “So keeping the area safe has always been a big priority for us. The Near West Side Partners is definitely making progress.”

Still, others expressed concerns about the neighborhood revitalization efforts.

“We want more than just the glamorous look and the prestige of having a nice-looking neighborhood,” said Teresa Thomas-Boyd, pastor of Central City Churches Outreach Ministry, a collaboration of eight congregations serving more than 2,500 neighborhood residents each month in the central city. “We want all people to be included.”

Thomas-Boyd said she sat in on a few community meetings NWSP hosted this past year. While she’s hopeful that the initiative will improve the neighborhood where she works and serves, she thinks it needs a “grassroots” person to build relationships with residents.

“This needs to be a community effort, and it needs to be inclusive of everybody,” Thomas-Boyd said. “Conversations and relationships need to be built all the way across the board.”

In an effort to address these concerns, Stanley said last month the organization hired Darrian Davis, a community outreach specialist. Davis will focus on resident engagement, said Stanley, working in each neighborhood to support the priorities of all seven communities.

Gary Ingram, program assistant for Central City Churches Outreach Ministry, noted that he would like to see job development, affordable, decent housing and a grocery store in Concordia.

Beth Haskovec, executive director of Artists Working in Education said she would like to see the arts and youth involvement incorporated in NWSP’s neighborhood revitalization efforts.

“If you can tell a story through artwork or storytelling or dance, you can create something that really has a long-term emotional connection to people,” Haskovec said. “And I think that’s the power of including artwork in neighborhood development strategies.”

Jess Flagg, volunteer coordinator at Milwaukee Academy of Science, agrees that Near West Side Partners should prioritize integrating new residents to the existing neighborhood identity. But she’s confident that under Stanley’s leadership, the five anchor institutions will do just that.

“I know that it may seem like a top-down effort to some people, having these big institutions almost deciding what the needs are,” Flagg said. “But I know there is still genuine interest coming from these individuals. They really do care about the community. And it’s obvious that Keith does, too.”

After all, Stanley grew up on the Near West Side, attending both Penfield Children’s Center and St. Rose Catholic School.

“The Near West Side is special in that this neighborhood has represented the heart, life and strength of the City of Milwaukee for many years. The assets, the people and values are all representative of the good-natured and supportive community I have been surrounded by my entire life,” he said.

Flagg said that about 25 percent of Milwaukee Academy of Science students live in the Avenues West neighborhood, and someday, she’d like to live there, too. She would also like to see new businesses that are true to the area’s cultural roots — efforts that honor the neighborhood, rather than recreate it.

But those efforts, though spearheaded by Stanley and the Near West Side initiative, also fall on neighborhood stakeholders, Mosier said.

“I protect my neighborhood to protect my guests,” she said while sitting in the ladies parlor of the bed and breakfast. “Although I call the police pretty often, we also try to do good for the community.”

This winter Mosier established a “warming tree” outside her establishment. Every day, she fills the tree with hats, scarves and gloves for neighbors.

“The Concordia neighborhood has many hard-working people,” she said. “But it’s even more wonderful that the Near West Side [Partners] is now getting involved.”

Editor’s note: When this story was originally published, it should have included a note stating that the author, a student journalist, is employed part time by Marquette University’s Office of Public Affairs.