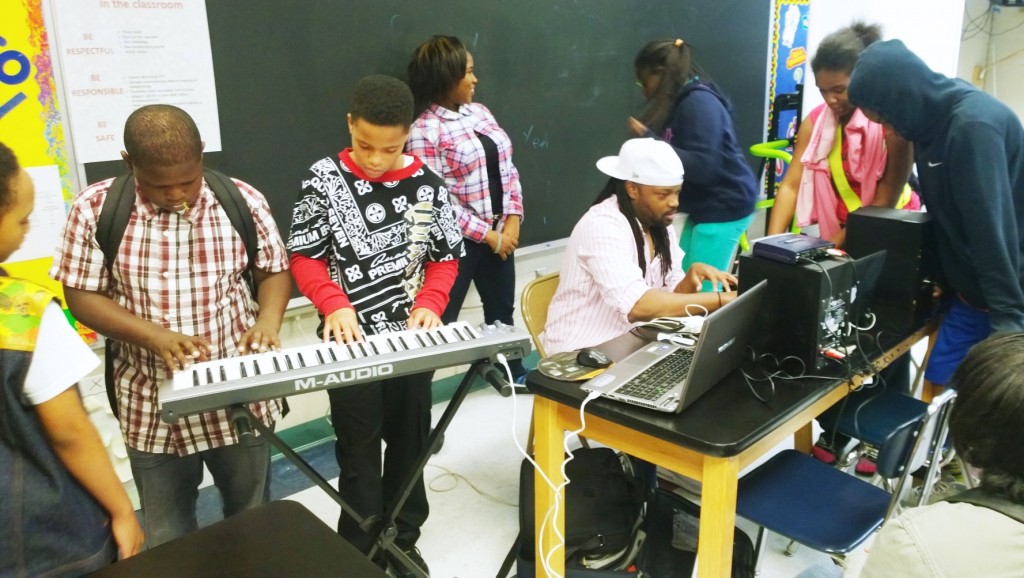 H2O Milwaukee Music has worked with more than 50 schools to provide music education programming to students across Milwaukee. (Photo courtesy of Marquis Gilbert)

The first verse of the song “Cold World” goes, “I’ve got four brothers, and they’ve all been to jail. That’s one thing about me, I’ve never seen a cell.” The verse is rapped by a student at North Division High School who participated in H2O Milwaukee Music’s Peace Propaganda Project, and is an example of the kinds of issues H2O helps teens address through music.

Cousins Dwight (aka DJ Tyme) and Marquis Gilbert (aka Sose) have walked through the doors of more than 50 Milwaukee Public Schools to share their passion for music and give their students an outlet to express their thoughts.

The Gilberts are the co-founders of H2O Milwaukee Music, an organization that offers music-centric afterschool programs at schools and other venues in Milwaukee.

The Peace Propaganda Project is a 10-week course beginning with basic music theory education, and ending with a student-produced music video. It teaches youth about music production, song writing and performing in front of a camera. It also serves as an outlet for students to have their voices heard, according to Marquis Gilbert.

Before H2O became known as the Peace Propaganda Project, and before it was an educational program, it was an online magazine created by the Gilberts. The magazine featured interviews with local musicians and worked to unite the local music community, said Dwight Gilbert. 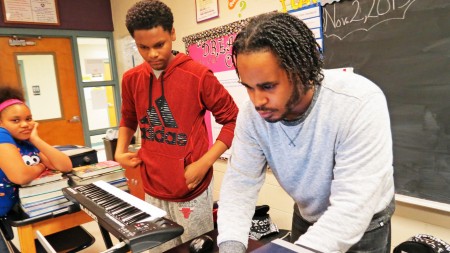 Despite the Gilberts’ passion for music, they said they didn’t feel fulfilled with the work they were doing so they decided to shift from performing music to teaching youth how to make it themselves.

Marquis Gilbert said that his background as a violinist helped him to develop discipline and focus. Dwight Gilbert also has a musical background; he got his start in music as a DJ. The Gilberts said all students can develop the traits their musical education instilled in them, if given the right opportunities.

“I think we’ve been successful in transforming student identities,” said Marquis Gilbert. “We’ve seen kids go from being labeled as a trouble maker, to getting a lot of praise for the work they do with us.”

H2O has collaborated with several other arts education advocacy groups, getting its start with Arts @ Large, a nonprofit organization that contracts with artist-educators to work in MPS schools.

Brianna Dorney, Arts @ Large’s communications and curation specialist, said that students tend to be more receptive to learning when they are working with professionals.

“When you have students working with professional artists they have a lot of pride in their work,” explained Dorney. “It gives them a needed confidence boost to achieve in other aspects of their lives.”

The Gilberts said that while music is important to them, their mission is about more than just producing songs.

“I use the word ‘propaganda’ because it usually has a negative connotation, but propaganda is really about how effectively you can package a message and how it resonates with the population you are trying to target,” said Marquis Gilbert.

Dwight Gilbert added, “We wanted to promote peace within school communities and through music, and we wanted to create a platform for youth to speak with other youth.”

Murrell Brown, 11, is a student at Lancaster School, 4931 N. 68th St., and participates in the H2O Peace Propaganda Project. Brown said that she enjoys the program and that creating the music takes hard work.

“It’s difficult making the songs and making the beats,” said Brown. “[Marquis and Gilbert] give us a chance to try.”

Ariana Elosi, 12, said she likes that H2O comes to Lancaster because it gives her the chance to learn about music. She added that the Gilberts motivate her to not give up when things get difficult.

In addition to working with schools, H20 participated in the Milwaukee Art Museum’s Satellite program, which aims to foster a deeper understanding for particular pieces of art using music, visual art, writing and other media of creative expression.

Helene Fischman, director of teen programs at the Milwaukee Art Museum, said Satellite wouldn’t have been able to develop into the program it is now without H2O’s help.”H2O served as a springboard for some of the work the students are doing now on their own, and helped to inform the launch of the reimagined Satellite program,” she said.

Fischman added that H2O serves an important purpose by offering students the ability to translate their ideas into musical performance. She believes it is vitally important for youth to have outlets for their creativity.

“When you teach teens creative skills, it gives them confidence and launches them into the adult world with an understanding of how important it is to express themselves,” explained Fischman.

Though the cousins are doing something they are passionate about, H2O has faced challenges. The program began as a partnership with James E. Groppi High School three years ago. The MPS high school serves at-risk students and can be a difficult place for new programs to thrive, explained Marquis Gilbert.

“It took a while for the program to take off [at Groppi],” he added. “But when kids saw what we were doing we went from having one kid, to five, to having a whole crew three years later.”

H2O has also had problems getting some community members to understand its mission. Dwight Gilbert said he has been told that what H2O does isn’t art, adding that the program doesn’t fit with what some people think arts education should be.

“It’s an art to go into these schools and know how to work with these students,” said Dwight Gilbert. “Eventually people come around and realize we aren’t just teaching kids how to rap.”