You are here: Home / News / Arts and Recreation / Timing of ‘Mural of Peace’ alterations takes artist by surprise
Share this... 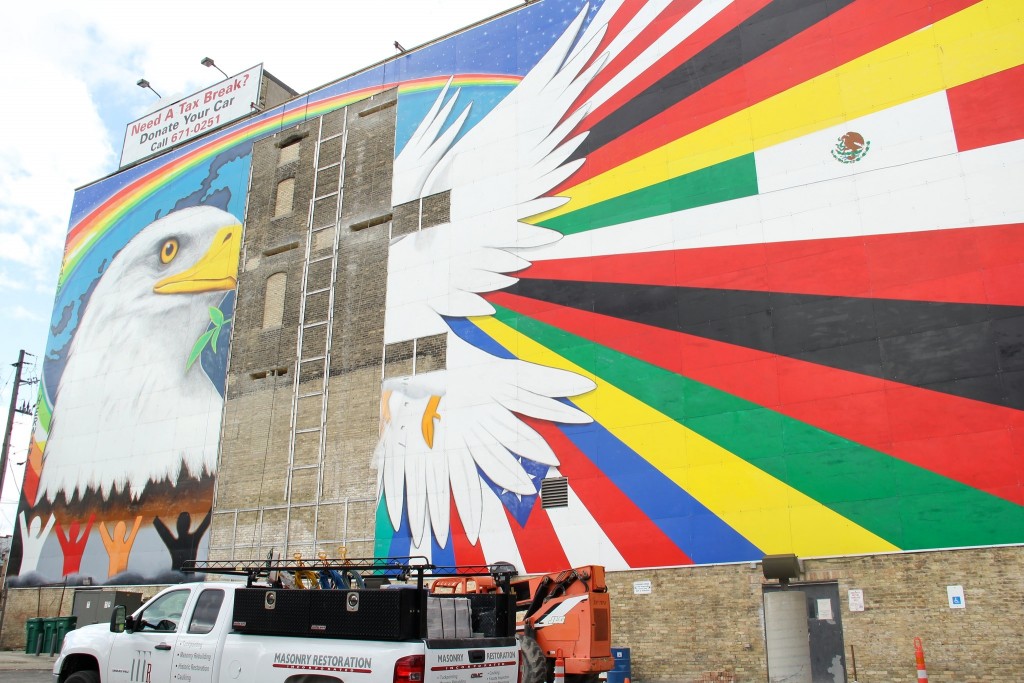 Reynaldo Hernandez will restore his “Mural of Peace,” seen from Interstate 43. (Photo by Sophia Boyd)

Social media lit up last week with news that a section of Reynaldo Hernandez’s iconic South Side “Mural of Peace” was missing. Even the artist was surprised.

Although Hernandez knew that the building was being renovated, he didn’t realize that a large vertical section of the mural had been removed. He said he found out “by accident” at a meeting about a different project earlier that day with Sean Kiebzak, director of programs at Arts @ Large.

Hernandez’s family also called to share their concern about the mural, he said.

The city foreclosed on the Esperanza Unida International building, 611 W. National Ave., last year due to unpaid property taxes. The building sold for $1.3 million to Keystone Development and its affiliate, Northpointe Holding LLC. The new owners are renovating the building into apartments known as the Mercantile Lofts. 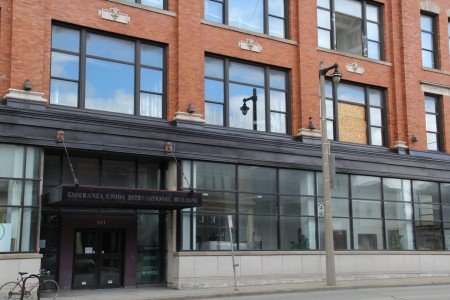 The Esperanza Unida International Building will be renovated into apartments under ownership of Keystone Development and affiliate Northpointe Holding LLC. (Photo by Sophia Boyd)

David Anglehart, site manager at Keystone Development, said the city building code requires natural light for the apartments, so windows had to be installed in the back of the building, which is painted with the mural that can be seen from Interstate 43. The developers could not install the windows without consulting Hernandez, who owns the copyright to his mural.

“My business is protecting my artwork,” Hernandez said.

The city of Milwaukee, the developers and Hernandez decided to cover the dozen windows with the missing section of the mural applied on vinyl, which will allow people to see out the window. “It alters the mural but I also understand the city wanted to sell the building so they can get a tax base in the future,” Hernandez said.

After the windows are installed, Hernandez will restore the mural to brighten the colors.

Hernandez said that the mural is a landmark in Milwaukee. “[People] don’t know what the future is (for the mural) so that’s why there was that big concern,” he said. “We’re going to try and fix it and make it look good again.”

Since the section of the mural was taken down, Anglehart said about 10 people have come to him to express their concerns. “I understand this is a symbol for the community,” he said. “We have told everyone that has shown interest that we are preserving the mural and it will be back up, weather-permitting, in a month.”