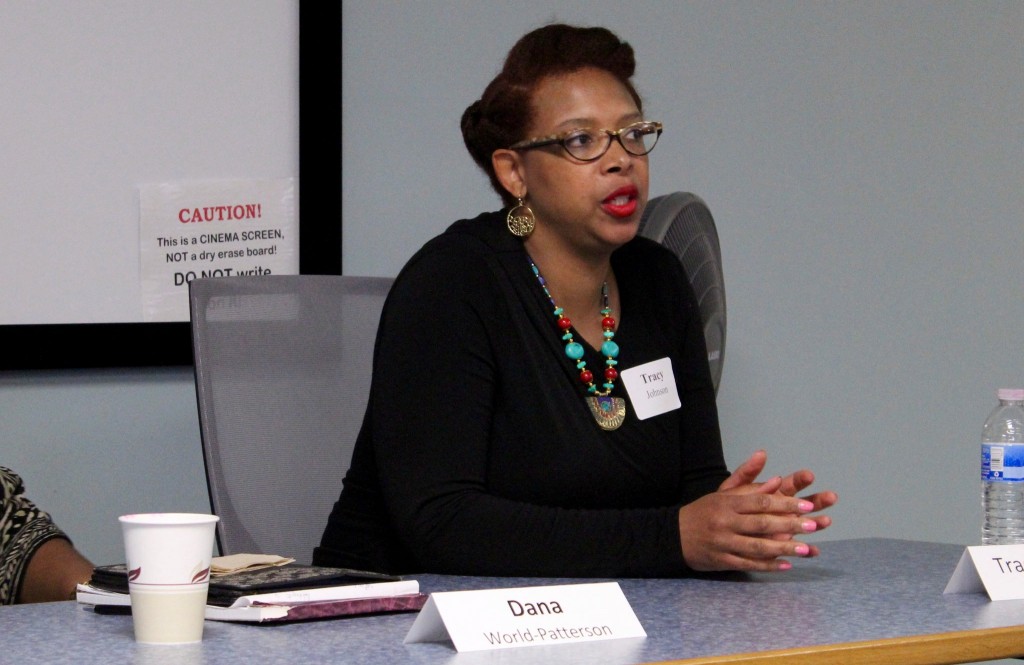 Tracy Johnson talks about her experience working as a leader in the state’s human trafficking task force. (Photo by Morgan Hughes)

Human trafficking experts who spoke at a recent panel discussion agree that people from any socioeconomic, racial, ethnic or geographic background can be trafficking victims. Nevertheless, in Milwaukee the vast majority of victims are female and African-American.

Leading local experts participated in the panel at the YWCA of Southeastern Wisconsin to kick off the group’s annual Stand Against Racism campaign.

“It’s all about … the intersection of the politics of oppression, forces like racism, sexism, classism and homophobia all coming together,” said Jeanne Geraci, executive director of the Benedict Center, which offers services to women who have previously been incarcerated or have engaged in the commercial sex trade.

Speaking to a room full of local nonprofit workers and community advocates, the panelists made it clear that many different kinds of people are affected by human trafficking in Wisconsin. Dana World-Patterson, chair of the Human Trafficking Task Force of Greater Milwaukee, said that it is dangerous to stereotype victims because that limits understanding of the true scope of the problem.

Throughout their time addressing trafficking, all the panelists have had experience with cases involving victims from a variety of backgrounds. They agreed that those who solicit commercial sex look for all types of girls, and the most prominent risk factor among victims is vulnerability in any form. 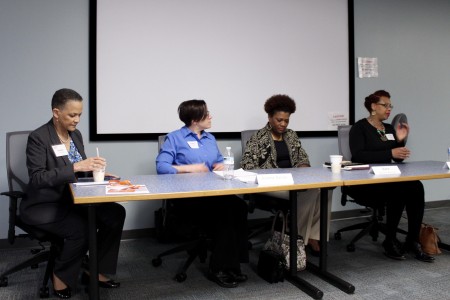 However, the panelists also discussed why it was appropriate to talk about trafficking at an event about racism.

According to Unlucky Thirteen, an initiative of the Human Trafficking Task Force of Greater Milwaukee, 78 percent of youth trafficked in Milwaukee are African American and 92 percent are female. Seventy-nine percent of human trafficking cases in Wisconsin occur in the city of Milwaukee.

“It’s somewhat of a double-edged sword in that you want people to realize that it can happen anywhere, but you also want to make sure those groups that are being disproportionately impacted are able to receive the assistance and the services that they need in order to get out of the situation,” said Tracy Johnson, an assistant U.S. attorney who has been a leader in the state’s human trafficking task force since 2006.

“We need to think about the intersection of race, poverty, gender and sex trafficking,” Johnson said. “You can’t disconnect them. We need to look at root causes and the systemic reasons this is occurring.”

Geraci and World-Patterson agreed that acknowledging who is being most affected can ensure that the limited resources available are allocated where they are most needed.

The Benedict Center is advocating to better allocate resources to support victim rehabilitation and to decriminalize prostitution in the city. The panelists said that the criminal justice system affects African American victims of trafficking disproportionately. They recommend that prosecutors shift their emphasis from those selling themselves for sex to those purchasing sex and those trafficking the victims.

“The negative impact of criminalizing is disproportionately impacting women of color,” Geraci said. “Whether an individual is (selling sex) because they have a pimp or they’re doing it for economic survival, criminalizing that act doesn’t help anybody.”

She acknowledged that law enforcement is punishing women for prostitution less than in the past, but said that sex workers can still be arrested and criminalized or written a municipal ticket. A member of the audience pointed out that the $698 municipal ticket for prostitution is more than the benefits a low-income woman receives from the state’s W-2 program each month.

“It’s frustrating, and it’s costly, but it also has collateral damage for the person that’s being arrested,” Geraci said. “It’s re-traumatizing them. (A criminal record) creates barriers for employment and for housing, and it breaks apart families.”

Geraci said she hopes to see a citywide municipal diversion program similar to the pilot program that Milwaukee Police Department District Three uses, which refers women to the Sisters Diversion Program at the Benedict Center to receive support services if arrested.

Panelists also suggested that resources could be shifted by looking at trafficking not just as a criminal justice issue, but as a public health issue. By not doing this, authorities are in effect ignoring “social determinants of health like class and race,” Geraci said. She emphasized the need to promote healthy relationships and healthy sexuality in the community.

“We talked about the intersection in the politics of oppression, and sexism is at the heart of this,” Geraci said. “When it comes to sexism, men are also done a great disservice in our society. They have these extreme ideas of what men are supposed to be and what women are supposed to be.”

World-Patterson suggested a way to tackle this as a city would be to focus more on working with and educating young women and men.

“We need to get girls to love themselves,” to protect against the vulnerabilities that make them susceptible to trafficking, she said. “And we need to have more conversations about what healthy masculinity looks like.”

About Allison Dikanovic and Morgan Hughes