Andrew and Bree Aguilera work together three or four shifts a week as registered nurses in the Aurora Sinai Medical Center emergency room. On at least one of those shifts, another registered nurse well known to the couple joins them: Bree’s mother, Patricia Dehli.

Herself a nurse’s daughter, Dehli, 59, has worked at Aurora Sinai, 945 N. 12th St., since 1978. Bree Aguilera, 35, didn’t set out to choose her mother’s and grandmother’s career, but a sudden change of heart while in college led her to start working at the hospital in 2001.

Andrew Aguilera, 40, was a medic in the Air Force for six years before Aurora Sinai hired him as an emergency medical technician in 2005. He became a nurse in 2012, five years after marrying Bree, a colleague he had dated for about a year.

The three have worked in the same hospital unit since Andrew arrived in 2005. People are often surprised to learn that they all work together. 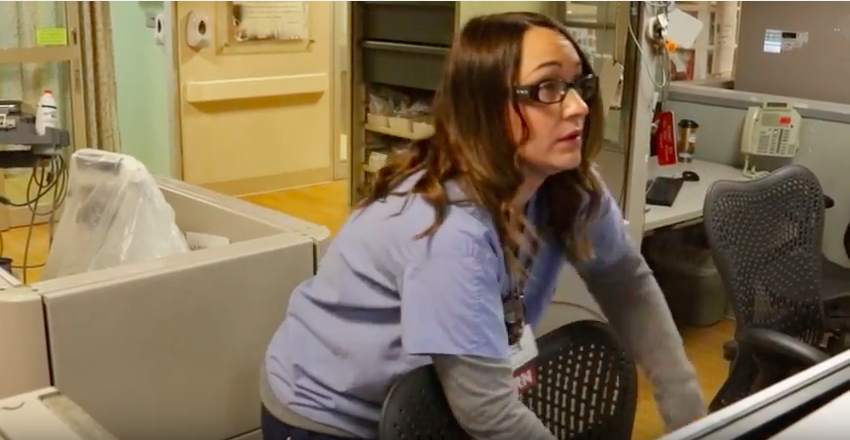 Bree Aguilera works at the Aurora Sinai Medical Center emergency room with her mother and husband.

Andrew Aguilera, a native of Park Ridge, Illinois, who graduated from Cardinal Stritch University’s nursing school, said that when men find out about the arrangement, he often hears, “I could never work with my wife.”

All three nurses said working alongside family members has its benefits. For example, it helps to have someone who understands the stress of their job. Emergency room nurses see a variety of patients, from infants, to the elderly, to the critically ill.

“We all know what each other is going through,” said Andrew Aguilera. Based on their years of shared work experiences, “when we’re not here, we can discuss what’s going on,” he added.

The only negative, they agreed, is the occasional scheduling conflict, but Bree Aguilera said that is outweighed by the positives. “I like it ’cause I get lunch packed or brought for me,” she joked.

Travis Bond, the hospital’s patient care manager, has supervised Dehli and the Aguileras the last three years. He said the three have had no problems keeping it professional at work.

“I have loved every second of working with these guys,” Bond said.

Registered nurse Kerry Klein, who has worked alongside Dehli for more than 30 years, also said that having the three in the same unit never poses a problem for her.

“They’re all very good nurses,” Klein said. “They’re smart and conscientious. They are very fair when they delegate assignments.”

Dehli had intended to become a history teacher instead of following her mother as a nurse, however, “they didn’t need teachers back then,” she said. At the time, she was working as a nurse’s aide in a convent, so she decided that nursing was the right career choice. The New Berlin West High School graduate earned a diploma from Milwaukee County General Nursing School, which is part of Milwaukee School of Engineering (MSOE).

Bree Aguilera had long resisted becoming a nurse. Her mother said: “If I would just talk about things in general, like from work, my son would be [very interested] and she would be like, ‘Do you have to talk about this? It’s making me sick.’”

However, one day while in college studying criminal justice at the University of Wisconsin-Milwaukee, Aguilera chatted with a friend who was studying anatomy, and it sparked an interest. The next day, she and Dehli went to lunch.

“I told her I wanted to go to nursing school,” said Aguilera, who did just that at Waukesha County Technical School.

“I thought she was kidding me, at first,” Dehli said.

These days, Dehli and the Aguileras share a common desire to help others.

“It’s fulfilling, just being able to help,” Andrew Aguilera said, “and to feel like you had a hand in someone’s care and sometimes in their lives.”

Having worked closely with family for so long, the three couldn’t imagine it any other way.

“If we didn’t work in the same place, I wouldn’t see them, you know, as often as I do,” Dehli said. “It’s been great. It’s been wonderful.”