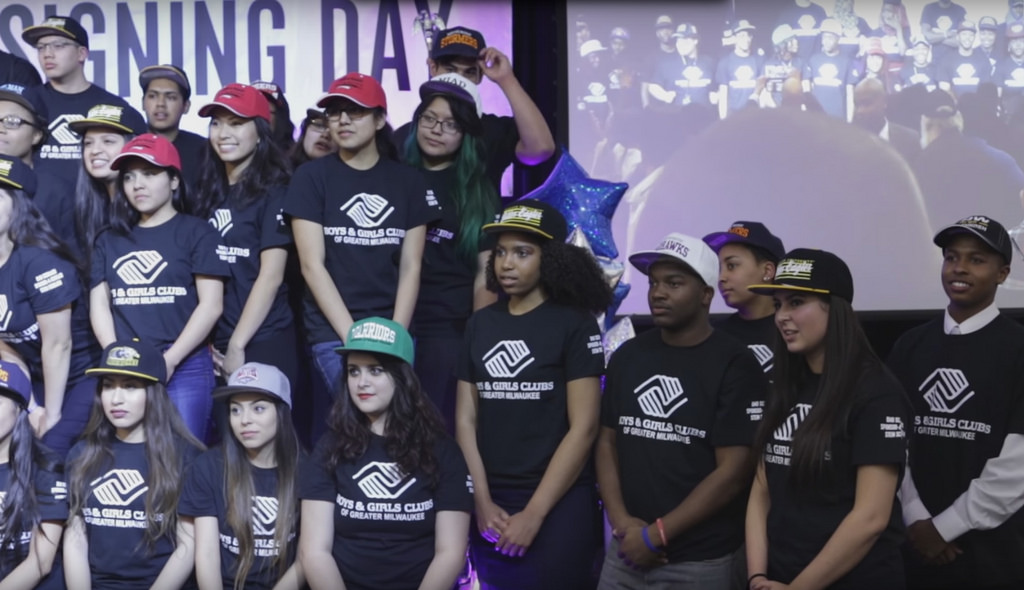 Participants in the Boys and Girls Clubs’ college access programming amassed a record $6 million in scholarship offers this year. (Photo by James Ragen)

It’s common these days for a star high school athlete to sit at a table and put on a baseball cap to signal which university he or she will play for, as family, friends, coaches and media look on.

However, inside Champions Hall at Direct Suppy, 6663 N. Industrial Road, more than 80 high school seniors – their athletic prowess inconsequential – had the thrill of publicly committing themselves to four more years of academic success.

“Wow! This is amazing,” Vincent Lyles, president of the Boys and Girls Clubs of Greater Milwaukee, told about 450 audience members assembled for the occasion. “We need more people being just like you all – inspiration for our young people.”

The seniors are all participants in the Boys and Girls Clubs’ college access programming. They amassed a record of $6 million in scholarship offers.

One of the college access programs, the Stein Scholars College Access and Success Program, has served 345 students since 2006, providing not only academic, social and emotional support, but critical help in securing financial aid to attend a college or university that otherwise would have been out of reach. 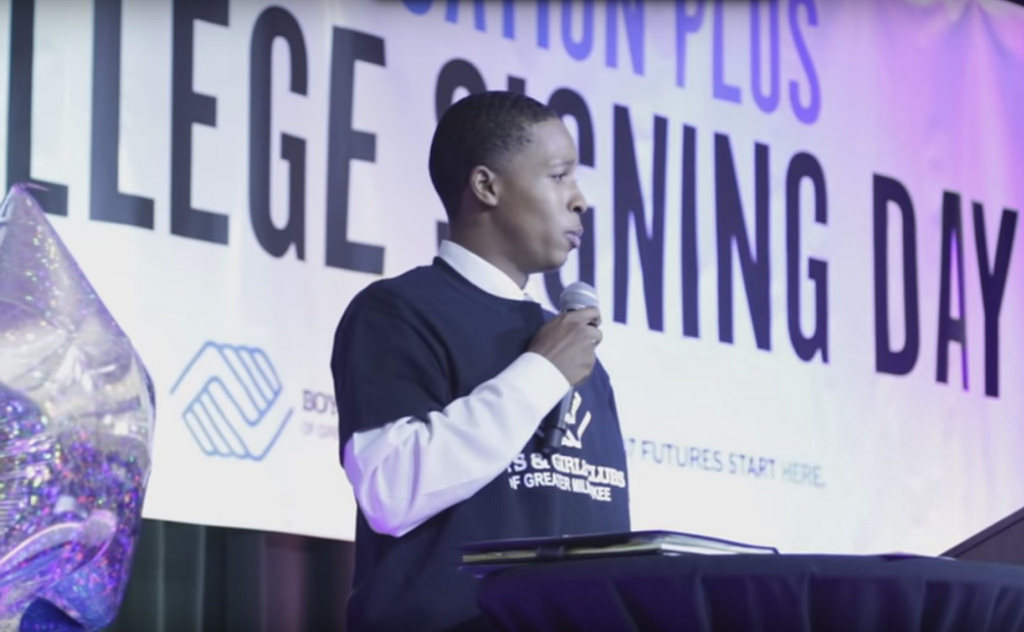 Roland Bucks will be attending the University of Wisconsin-Oshkosh. (Photo by James Ragen)

Inside Champions Hall, family, friends and many others assembled to witness the 2016 graduates step to the stage and sit side by side at a table to sign a letter of intent and put on their college’s hat. Goody bags from the club awaited them off stage.

The letters of intent came with strings attached. Each graduate had to agree to a set of rules: Maintain a 2.5 GPA, have a 95 percent attendance rate in all classes, enroll in at least 12 credits per semester, complete assignments by their due dates and graduate. The students also commit to stay connected to the Boys & Girls Clubs.

Roland Bucks, 18, was hesitant at first to join the Stein Scholars program, but people kept pushing him to do so. He will attend the University of Wisconsin-Oshkosh and intends to major in business and minor in communications.

“They said that this was an opportunity not to miss – and now I see that they were right,” Bucks said.

Eric Burks, 18, scored a 34 out of 36 on his ACT exam. He will attend Morehouse College in Atlanta.

“It took blood, sweat and a lot of tears,” Burks said. “ I’m happy to say to my fellow scholars that we made it.”

Bucks’ father, Curtis Bucks, who drives trucks for a living, never got to attend college. Roland is the first of his children to get the chance.

“I’m proud of him doing it out of all eight kids,” the father said. “I am just so very, very happy.”

Roland Bucks wants to own his own business, although he is unsure what kind. He said he looks forward to when he can give back to the Boys and Girls Clubs.