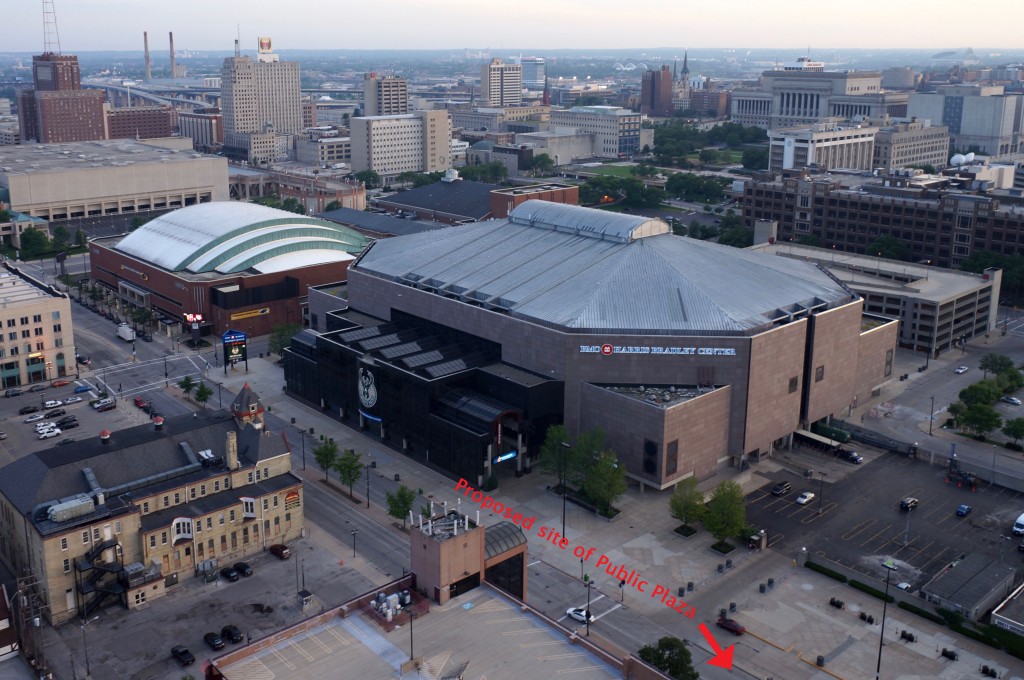 The portion of 4th Street between West Juneau Avenue and West Highland Avenue is northeast of the BMO Harris Bradley Center. (Photo by Adam Carr)

Michael H. Carriere is an associate professor at the Milwaukee School of Engineering, where he teaches courses on American history, public policy and urban design. He questions the public benefit of the Bucks’ plan for a “Public Plaza” near the new arena.

The Milwaukee Bucks have made little effort to hide the fact that they want to make a big impact in the former Park East corridor. In addition to a new arena, the franchise has called for the creation of a “Live Block Plaza,” a covered pedestrian plaza adjacent to the arena. Now, the team has put forward plans for a “Public Plaza,” a space on North 4th Street between West Juneau Avenue and West Highland Avenue meant to connect the Live Block Plaza and the Bucks’ arena.

The construction of the Public Plaza is only possible due to the recent decision to close a portion of North 4th Street to automobile traffic. In exchange for this development, the Bucks have offered to build this plaza at no expense to the city. Sounds like a nice quid pro quo, yes?

Well, not really. The City of Milwaukee owns the property to be developed, and it has entered into a lease with the Wisconsin Center District (WCD) to create the synergy needed to make this project happen. Yet the WCD, a government body created in 1994 to oversee development in downtown Milwaukee, has turned around and subleased the property to the Bucks. And how much are the Bucks paying the city for this 30-year lease? Not a penny.

At the same time, the lease for the plaza makes it clear that this “public” space can be closed for “special events.” These events can happen “only on a temporary basis,” but there is no indication given as to what “temporary” means here (Days? Weeks?). The lease also makes it clear that the WCD may charge “a reasonable admission fee” to people attending such special events. Again, there is no clarification as to what a “reasonable” fee might be. Moreover, third-parties can receive approval to use the space for private events. This not only means that a public, city-owned street can be closed to Milwaukee residents at any time; it also means that private actors stand to make money off of a public space – a space that should remain accessible to all people at all times.

Yet the terms of the lease are even problematic when discussing the “public” aspect of the plaza. According to the lease, public use of the space “shall be limited to normal and customary pedestrian and recreational uses appropriate for a public plaza of the size and scope of the Public Plaza,” while “any commercial activities or operations by members of the public not expressly allowed by WCD” will not be allowed in the plaza.

Perhaps even more troubling, the lease explicitly prohibits a series of “inconsistent” uses of the space. These uses include “loitering, unauthorized vendor or commercial activities or other types of uses that may constitute a public or private nuisance.” The only authority listed to decide when use of the space becomes “inconsistent” is the WCD.

It is obvious that this lease represents the further privatization of once-public urban space. This plan primarily benefits one actor: the privately-owned Milwaukee Bucks. What is even more insidious about such plans is the way they transform a once-public urban space into something decidedly non-public and non-urban. Such a strategy strips the city of more than a route of transportation. It removes the openness, unpredictability, creativity and vitality that go hand-in-hand with truly urban, public spaces. Such plans are no way to redevelop downtown Milwaukee.