You are here: Home / Posts from Community / City of Milwaukee Arts Board announces 2016 Artists of the Year and Friends of the Arts Awards
Share this... 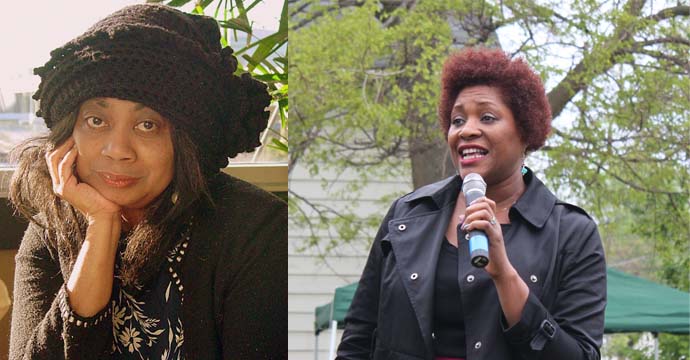 Della Wells and Dasha Kelly have been named 2016 Artists of the Year, the City of Milwaukee Arts Board announced recently.  Thallis Hoyt Drake and Andy Nunemaker were named 2016 Friends of the Arts.

They will be honored Tuesday, June 14 at a 4:30 p.m. reception in the atrium of the Marcus Center for the Performing Arts followed by an awards program and celebration at 5 p.m.  Representatives of 33 city-based arts organizations who received arts board grants will also be honored.

“We’re glad to shine a light on these four individuals, who have contributed so much to our entire community,” said Ald. Michael Murphy, who chairs the Milwaukee Arts Board.

Della Wells is a self-taught artist who began drawing and painting in earnest at the age of 42. Her work ranges from collage and pastels to quilting.  Her creative process stems from her personal experiences embellished through the art of storytelling. In 2011, an award winning play inspired by her life, ” Don’t Tell Me I Can’t Fly”, premiered in Milwaukee. The play was commissioned by First Stage children’s theater and written by Y York. She illustrated a children’s book, “Electric Angel” by Nanci Mortimer, to be released by Wooden Nickel Press in late June. Currently Wells is working on a documentary about Milwaukee’s African American art scene from 1967 to 1979 with filmmaker Rubin Whitmore II, artist Mutope J. Johnson and artist Christopher McIntyre Perceptions. Wells’ work is in more than one hundred private and public collections. She has exhibited in numerous galleries, museums and art festivals including the Outsider Art Fair in New York and the Kentuck Festival of Arts in Alabama, where she was a featured artist. She is represented by Red Piano Too Art Gallery in St. Helena Island, South Carolina, Marcia Webber Art Objects in Montgomery, Alabama, and Main Street Gallery in Clayton, Georgia. Her dolls are sold at the gift shop at the Intuit Center for Outsider Art in Chicago, Illinois and her collages will be sold at the Smithsonian African American Museum which opens in September of 2016 in Washington, D.C.

Dasha Kelly is a nationally-respected writer, artist and social entrepreneur.  She travels extensively leading experiential workshops on creativity, team building and writing.  As a spoken word artist, Kelly has performed throughout the U.S. and Canada and appeared on the final season of HBO presents Russell Simmons’ Def Poetry Jam.  Kelly’s second novel, “Almost Crimson” (Curbside Splendor), was named by BuzzFeed one of the “16 of the Most Exciting Books of 2015 by Independent Publishers.” In 2015, Kelly was selected for a second time as a U.S. Embassy Arts Envoy to teach and perform in Botswana, Africa. Additionally, she was named a finalist for Poet Laureate of the State of Wisconsin.

A classically trained musician, Thallis Hoyt Drake has been a performer, board member and founding member of numerous Milwaukee arts organizations during her long career.  Among others, she served on the boards of the MacDowell Club, the Milwaukee Symphony Women’s League, the Milwaukee Art Museum’s Friends of Art, and the Civic Music Association, serving the latter for more than two decades. In 1986 Drake founded the Early Music Now concert series, volunteering as the organization’s Executive Director for its first twelve seasons, until it reached a position to engage a full-time general manager in 2001. Officially “retired,” she is still serving a number of organizations in various capacities, most notably the Villa Terrace Sunday morning musicales and Lake Park’s Musical Mondays.

Established in 2012, the Friends of the Arts Award is given to individuals who, often behind the scenes, have distinguished themselves through exceptional service to Milwaukee’s arts community.  Past recipients include: Steve Vande Zande, Lori Bauman, Konrad Kuchenbach, John Holland, Dorothy Nelle Sanders (posthumously), Lucinda Gordon, Gloria Wright, Sue and Tim Frautschi, Joseph Pabst, Barbara Brown Lee, Mario and Catherine Costantini.