You are here: Home / Home / Carousel / Bronzeville and Walker Square residents welcome Bublr Bikes to their neighborhoods
Share this... 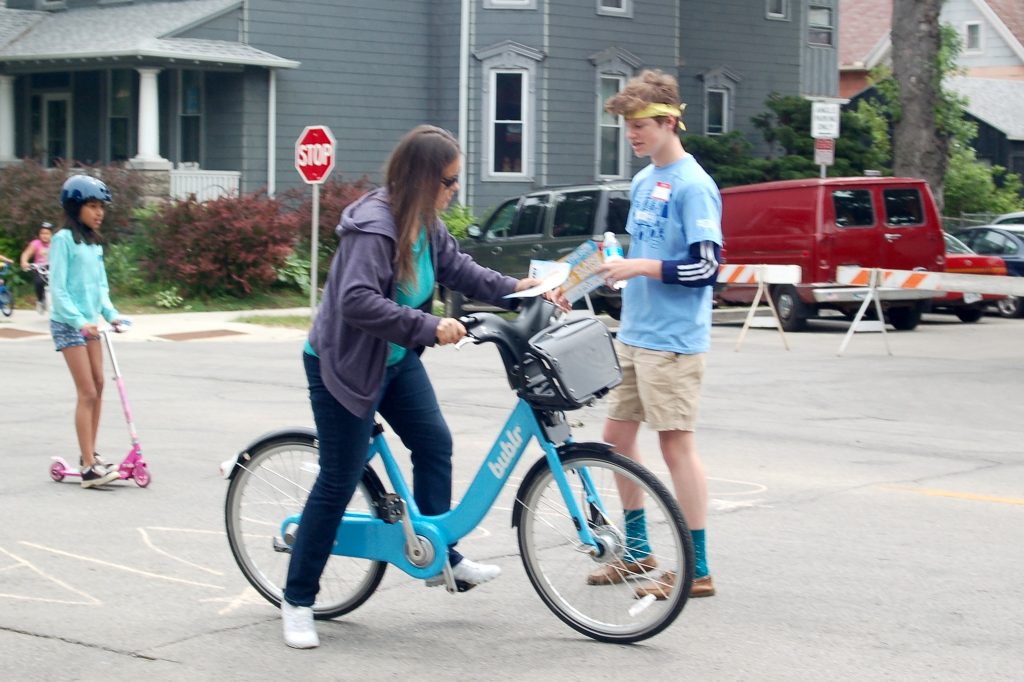 Residents of Bronzeville and Walker Square are glad that Bublr Bikes are now available in their neighborhoods, but some parents would like to see the bike-sharing service offer cargo bikes, so they can transport their children.

“I think it’s awesome, but I need something more kid-accessible,” said Carina Krantz, a mother of four young children who lives on the South Side.

Krantz said she would consider using Bublr Bikes if cargo bikes were available.

Brent Grier, a South Side parent, said he would use the bicycles “in a pinch,” but noted it would be useful if there were a cargo bike option.

One of two new bike stations is located in Halyard Park at Brown Street and Dr. Martin Luther King Drive, in the area known as Bronzeville. The other is at Cesar Chavez Drive and Washington Street in Walker Square. 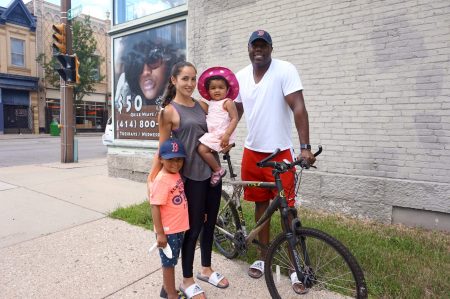 Lucia and William Jenkins, who live with their children in Bronzeville, would like to see Bublr offer cargo bikes. (Photo By Rebecca Carballo)

Lucia Jenkins, a Halyard Park resident, said she would not be using Bublr because her family has their own bikes. However, she too said she would be open to use them if cargo bikes were available.

Xochitl Morales who lives in the neighborhood and works at Time Warner Cable, uses Bublr Bikes on her lunch break to explore downtown. She said she would like to see a cargo option.

“I have grandchildren and that’s something I would want,” Morales said. She added that she and her grandchildren have enjoyed using cargo bikes before.

Kevin Hardman, executive director of Bublr Bikes, said he has heard the request for different types of bikes before. He said it is a possibility, but it is in the hands of the supplier, BCycle.

“It’s crucial we hear from users about what they want and need,” Hardman said.

Hardman added that the concept of bike sharing is evolving. He said as it becomes more popular, he anticipates new styles of bikes will be introduced.

“I saw them in other places and I thought it would be cool to have one in the neighborhood,” McFarling said. “I don’t have a bike but I really like riding them.”

McFarling added that the rental fee would not deter Halyard Park residents. “I don’t think the rates are bad because bikes are pretty expensive,” McFarling said. “It’s a good alternative if you’re not going to ride regularly.”

“It’s hopefully breaking down invisible borders between the downtown and the neighborhoods,” Jobs said.

Ashley Parker, who works at DreamBikes, said she thinks the bikes will probably get a lot of use because many neighborhood residents do not have cars.

Ian Bautista, executive director of the Clarke Square Neighborhood Initiative, noted that the bikes also will benefit the South Side.

“It’s an affirmation we are connected to the rest of the city,” Bautista said. “It validates we’re a viable economy.”

In the next few years, Bublr Bikes plans to expand to more than 100 stations and 800 Bublr Bikes in the Milwaukee area. The Milwaukee-based nonprofit has launched 40 bike share stations downtown and in adjoining neighborhoods.