You are here: Home / Posts from Community / Outcomes from Summit on Poverty reveal extensive work needed in Milwaukee County
Share this...

The stark reality of the challenges and work needed to address the extensive state of poverty in Milwaukee County were clear at the conclusion of SDC’s Summit on Poverty held Tuesday, August 2. Hundreds of attendees representing all aspects of the community – educational institutions, community and faith-based organizations, the business community and residents, were committed and motivated to develop an action plan for implementation in the community.

The world-renowned Dr. Joy DeGruy kicked-off the summit with a powerful two and a half hour presentation on trauma to an audience that was fully captivated. Following a rousing standing ovation lasting several minutes, DeGruy took questions from dozens of participants. Participants had so many questions that the Q & A had to be cut-off to ensure adequate time for the scheduled sessions. 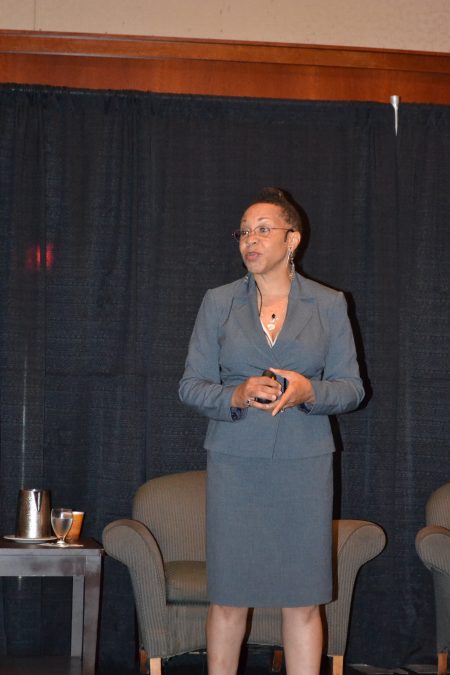 Four breakout sessions were held concurrently and focused Cognitive Dissonance and Willful Silence – the Economic Divide, The Ism’s (racism, sexism, classism, etc.), Policies & Systems, and Trauma – Causation with Maslow’s Hierarchy. The sessions raised a breadth of questions, causes and issues related to their respective topic and concluded with prioritization of actions needed in the community in order to reduce poverty.

Focus points from each session were announced at a report-out identifying focus points for the organizing committee to further prioritize and develop an action plan. Topline points included holding politicians accountable for the implementation and activation of new and existing policies and laws to bring people out of poverty; creating viable public transportation to jobs; changing the allocation of funds to meet the community’s needs; and politicians working, in earnest, across the aisle for the benefit of those in poverty.

Trauma focused recommendations directing efforts toward education and the development of non- judgmental attitudes; hearing others’ trauma through listening to their stories; and helping individuals learn to say, “I can trust you.”

Recommendations from Policies & Systems included making politicians, businesses, faith-based and community leaders accountable at all levels; continually having cultural competency, anti-racism, and anti-bias training in systems of traditionally white supremacist structures; and addressing the intersection of race and gender and how each or both translate into the need for emotional and self-care for both normal trauma and that resulting from being beat down at a place of employment.

Themes that emerged from the Cognitive Dissonance and Willful Silence –the Economic Divide had a strong focus on privilege. The feeling that it is often unearned and questioning why is there is a sense of it toward other socio-economic brackets, and are those with a sense of privilege willfully turning a blind- eye to poverty. The need to stop blaming low-income individuals and families for their economic status was raised, as was the role of history and education in shaping viewpoints.

At the conclusion of the day, a number of attendees committed to engage in the execution of the action plan once developed.

The summit’s organizing committee will reconvene in the coming weeks to review all of the data collected, discussion points that led to the recommendations, and contact participants about next steps and assignments for the finalization of the action plan for the community.