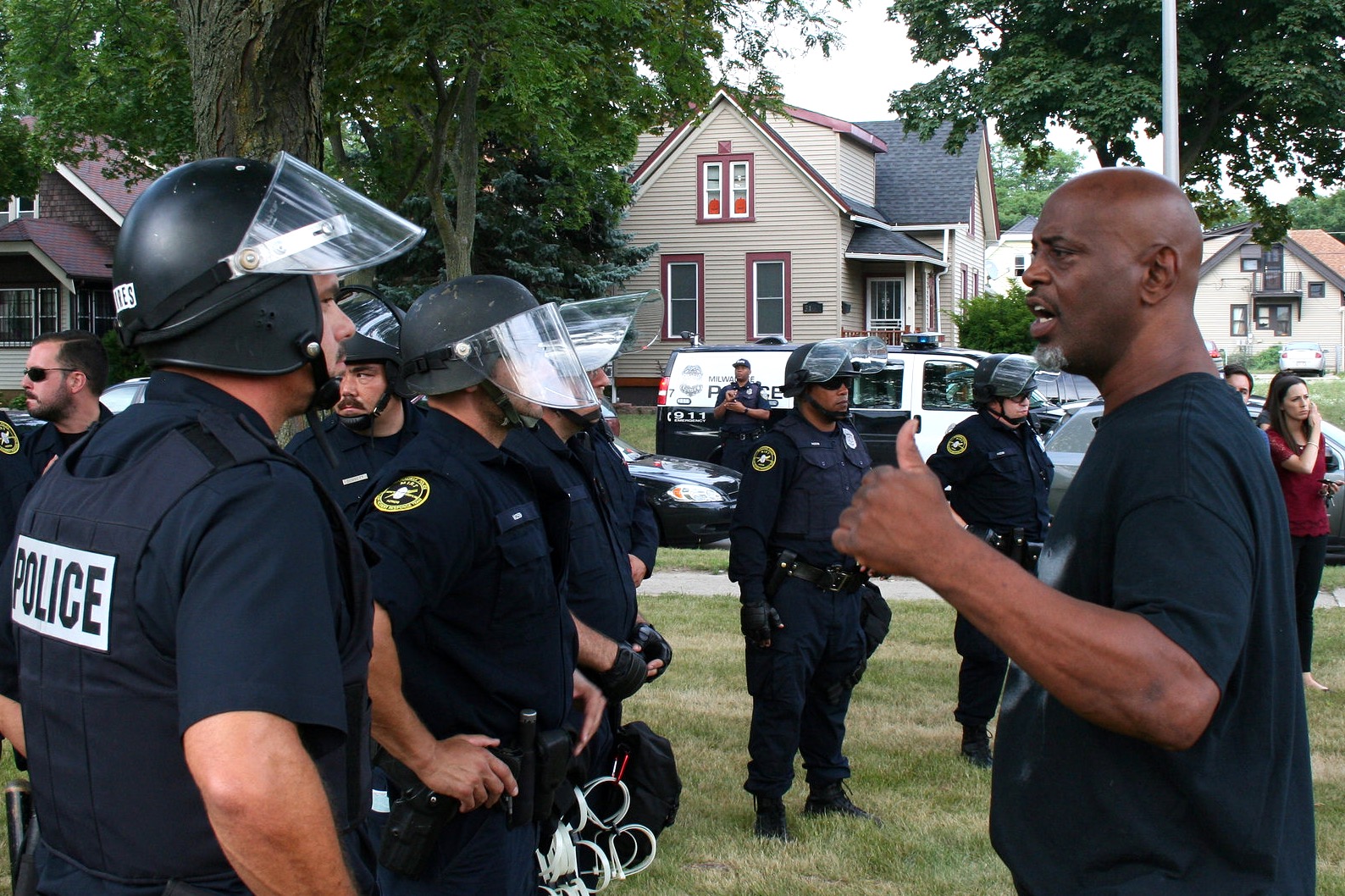 Brian Sylvas talks with a Milwaukee police officer shortly after a young man was taken into custody in Sherman park. (Photo by Jabril Faraj)

Will Tchakirides is a Ph.D. candidate in United States History at the University of Wisconsin-Milwaukee. His dissertation explores race and policing in Milwaukee from the vantage point of African-American officers and the communities they serve. He and his family live in the Washington Heights neighborhood.

Late Saturday night, August 13, Milwaukee leaders organized an impromptu news conference in response to the violent unrest then engulfing the Sherman Park community on the city’s predominantly black North Side. After Mayor Tom Barrett and Common Council President Ashanti Hamilton updated reporters on the city’s efforts to restore order –– admonishing parents to get a hold of their recalcitrant teens in the process –– Alderpersons Khalif Rainey and Russell Stamper II worked to contextualize the aggrieved perspective of Milwaukee’s disaffected black youth and their families. In my view, they looked to communicate the war-weariness of tax-paying citizens who have grown tired of constantly defying their second-class status in Milwaukee, “tired of living under this oppression.”

“Where do we go as a community from here?” Rainey implored. “Do we continue –– continue with the inequities, the injustice, the unemployment, the under-education, that creates these byproducts that we see this evening?”

After watching parts of his district burn in the aftermath of a deadly police shooting, Rainey chose not to place blame on the usual targets –– neglectful parents, misbehaving youth, or his community’s lack of “personal responsibility.” Nor did he weigh in on emerging discussions around Sylville Smith’s “lengthy criminal record,” or whether Milwaukee police acted lawfully in ending the armed 23 year-old father’s life. Perhaps Rainey understood that determining justifiable cause in Smith’s case would do little to diffuse the long-gestating “powder keg” he implied would ignite in downtown spaces if black lives continued to not matter in Southeast Wisconsin. After all, Smith’s name follows in a trail of black deaths at the hands of local police, names that have underscored the community’s escalating distrust of law enforcement, while also sparking homegrown movements for justice and accountability: Anderson, Hamilton, Williams, Lacy, McKissick, and Bell to name a few.

No. Instead, Rainey made the bold case for addressing the systemic racism underlying his city’s ignominious status as “the worst place for African-Americans to live in the country.” In essence, he argued for correcting the biased systems that continue to produce disparate socioeconomic outcomes and dismal life chances for thousands of residents of color, human beings seeking to navigate Milwaukee’s hyper-segregated terrain with their dignity and freedom intact.

The alderman’s words were revelatory, not just because they framed Saturday night’s unrest as a “byproduct” of systemic inequality, but because they insisted we avoid getting bogged down in “examining” why the city is so bad for black families and begin “rectifying” the matter once and for all.

The postwar black freedom movement may have guaranteed formal legal equality, but one’s ability to live a high quality of life remains limited in post-Civil Rights Milwaukee. Stark wealth and achievement gaps, hundreds of years in the making, cannot be remedied overnight, let alone in the face of a prevailing backlash politics that has effectively neutralized feeble government attempts to eradicate poverty, undermined Affirmative Action policies, and privatized a host of formerly public state and municipal services in ways that benefit corporate patrons at the expense of the people.

We know the causes of black anguish in Milwaukee; now we must instill consequential relief.

At a base level, Rainey is calling for necessary acceptance on the part of Milwaukee power brokers and the communities they serve. I have to believe he is doing so in hopes that it leads to a meaningful process of truth and reconciliation. Milwaukee, like America, has never really done the hard work of acknowledging how white racism conditions black life, work that demands total completion before racial injustices can be remedied in earnest. Scholars have been documenting Milwaukee’s inequality and the root causes of racial injustice for decades; now we must reckon with their results as a community in a way that recognizes, cedes and, yes, redistributes power. Biased economic development, commercial/residential real estate, education, and criminal justice policies, among others, have served and protected Milwaukee’s privileged white constituencies since 1846; they are by great measure responsible for both the less visible harms that aggrieve black residents on a day-to-day basis and the more sporadic, chaotic scenes on display last weekend.

Inevitably, media commentaries, and thus public understanding, of events like the 2016 “Milwaukee Uprising” will pivot around questions of black comportment and communal responsibility rather than manmade policy choices that support uneven racial geographies of power, access and opportunity. Rainey’s words mark a departure for how public officials should and must frame matters of race, power and remediation in the wake of violent confrontations between African-Americans and the occupying forces that order their lives. Let us heed the alderman’s call, lest the real problems facing our city and country be forgotten.