You are here: Home / Community Voices / Sherman Park is burning — but not how you think
Share this... 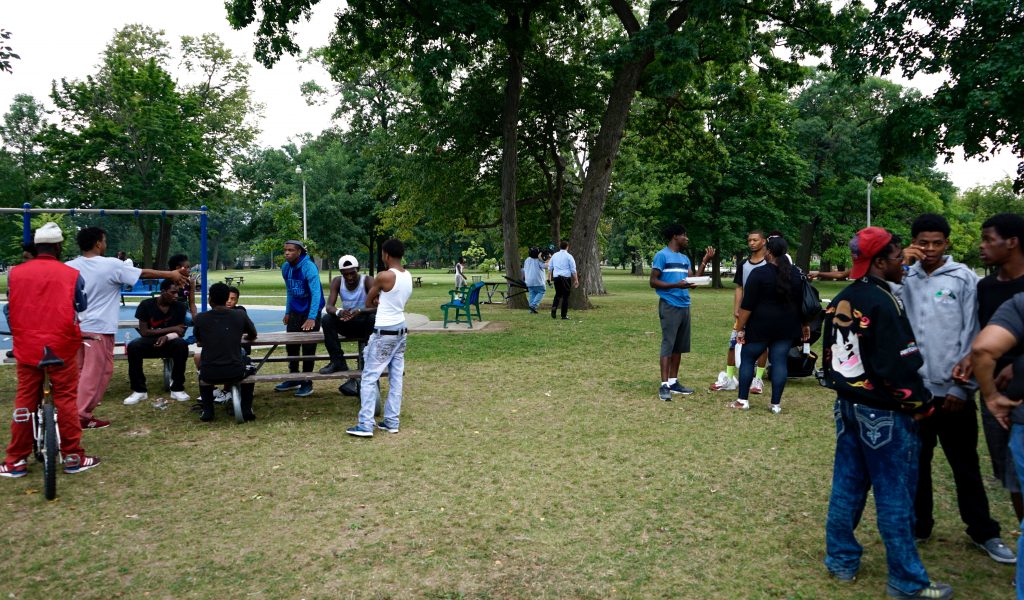 Alex Runner, a Sherman Park resident who serves on the board of Historic Milwaukee, writes about the burning frustration building in young men of color who see prosperity in their neighborhood, but have been unable to attain it.

A young black man was killed by a police officer, and a group of protesters became violent in response. They burned down a gas station and damaged several other businesses. Some even looked for white people to beat up. Those are the facts that we know for certain.

Whether the victim, Sylville Smith, 23, had a gun or a license for a gun or was running away or was shot in the back — we don’t know. All we know for sure is that he is dead. And his death was caused by a police officer, who also happens to be African-American.

The media has tried to build a narrative around that one building being on fire. Sensationalized “click-bait” headlines proclaim that “Milwaukee is burning” or “Sherman Park on fire.”

They’re right, but not in the way they intend. Milwaukee is burning — from the inside out — but there is much more at stake than mere bricks and mortar turning to ash. Clearly, vandalism and property destruction are unacceptable, but young men of color in our city and our nation are burning with a desire to have their lives mean something. To be valuable. To have a future. And too many of them have nothing to lose.

Over the years, I’ve seen many young men in Sherman Park fuel the flames of frustration with unanswered job applications, unread resumes and unpayable bills. Aimless and angry, they wander the streets without purpose or direction. And, too often, others avoid conversation — or even eye contact — as if they are the walking dead. More guns, more jails or more cops will not begin to address this problem. Those types of “solutions” are really not solutions at all.

We have a generation that is enflamed with frustration. That is the fire that must be extinguished.

Perhaps more than anywhere else in Milwaukee, this fire has burned bright in Sherman Park — not because there is abject poverty everywhere, but because there is visible wealth. The economic and racial diversity of Sherman Park, with its old-world charm and enviable architecture, has served as a smoldering cinder to many young men. They walk down Grant or Sherman or 47th Street and see rusted cars parked right next to BMWs and Teslas.

One home might be financially stable, with a family that takes regular vacations, but next door may have a father in prison and a mother working three jobs to barely make ends meet. Some of Sherman Park’s children are lucky enough to attend high-performing schools, while others don’t have parents who know how to navigate the system.

Like Tantalus of Greek mythology, the fruit of prosperity is close enough to see in Sherman Park, but it consistently appears to be just barely out of reach for many. Yes, diversity is a strength, but without equality that same diversity can generate friction, anger and disdain toward those who appear to have it made — even (or especially) if they are fellow African-Americans.

What shall we do then? Seek homogeneous neighborhoods where everyone is the same and no one is confused by contrast or burns with envy? Settle for a cul de sac of sameness? God forbid.

The answer itself may also reside in Sherman Park. We’ve lived in the same bungalow under a cool canopy of mature green trees for more than a decade, and I’ve learned that the most dangerous thing about this place is not the young men who seek purpose. What makes Sherman Park so dangerous is hope. While frustration is pervasive, so is potential. Although too many young men here are unable to climb the ladders of opportunity, there are just as many who have found ways to be successful. Sherman Park is a study in contrasts, and not only the racial diversity that sits on the surface.

Here young men of color see older men of color who have done well for themselves. They burn with a desire to be valued because they see that others like them are valuable. It’s when roadblock after roadblock resurfaces — and those who are sworn to protect are instead doing the killing — simmering frustrations boil over and anger burns as strongly as an ignited gas station. It’s our job (all of us, but especially folks like me in the neighborhood) to reach these young men before they are consumed by the fire raging inside. Rather than putting more of them in prison, we have to help more tap into their God-given potential.

I’ve been told by several of the young men in my neighborhood — those who have found a way to beat the odds and become productive citizens — that I knew Sylville Smith when he was a boy. Before his tattoos, long hair and concealed-carry license. Apparently, he lived a block away from me, and I spoke to him a few times, according to the memories of others.

The thing is, I’ve studied his picture, and I can’t remember him. And that disturbs me as much as anything. It haunts me, in fact.

What if I had spent time truly getting to know Sylville? What if I had helped him see a better path? Would he still be alive today? Could the fire of frustration have been supplanted with a sense of purpose?

I’m probably overestimating my impact, but the burning truth that I have discovered over the past two weeks is that every interaction counts. Each conversation can either stoke the fire of frustration or offer the cool water of concern.

It’s not only a choice for those of us who live in Sherman Park, which I am still grateful to call my neighborhood. It’s a choice for all of us — whether you live in Brewers Hill or Brookfield. Will you take time to encourage these young men without a network of support? Will you help them make connections to a better future?