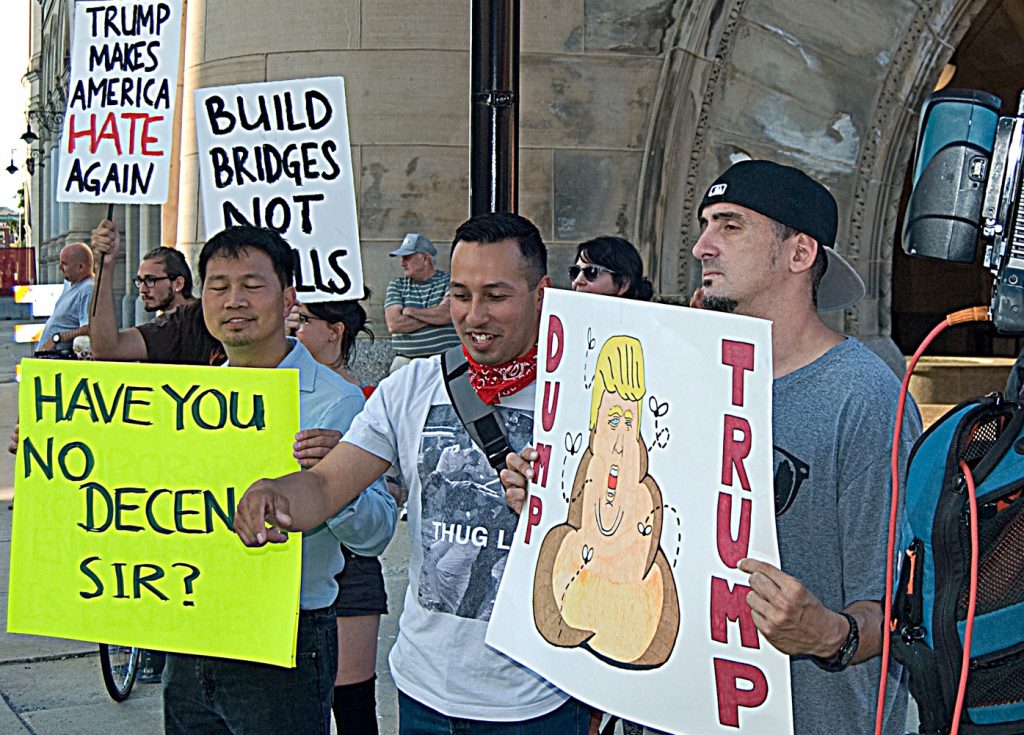 Protesters demonstrate in front of City Hall on Tuesday, Aug. 16, protesting the appearance of Donald Trump at an interview by Fox anchor Sean Hannity at the Pabst Theater across the street. (Photo by Gregory Stanford)

What a funny way Donald Trump has of reaching out to black people. The Republican presidential nominee came to Milwaukee and, skirting black neighborhoods, drove out to the lily-white suburb of West Bend to urge African-Americans to vote for him — a perplexing pattern he has since repeated in Michigan and North Carolina.

In the West Bend speech he accused Hillary Clinton of “talking down” to African-Americans. But what do you call lecturing people without even bothering to look them in the eye? In contrast, Clinton talks face to face with African-Americans.

The real estate tycoon could have done so, too. Coming to town in the wake of the turmoil in the Sherman Park neighborhood, where businesses were torched, he could have met with, say, business owners there — a gesture that would have packed more meaning than the empty, albeit clamorous, rhetoric that he spewed in West Bend.

Trump’s black support barely registers in the polls. He’s clocking in at 1 to 2 percent — the worst showing ever for even a GOP standard bearer. So it’s understandable he would want to boost those numbers. But the bizarre way he’s going about doing it makes you wonder: What’s his game?

There is a history here. The GOP is, as Trump himself has reminded us, the party of Abraham Lincoln, who freed the slaves. Thus, black people were solidly Republican after the Civil War. Franklin Roosevelt’s New Deal, though, drew most African-Americans to the Democratic Party. Still, a sizable minority remained loyal to the GOP.

Richard Nixon fixed that, adopting what’s known as the “Southern strategy,” which involved winning office by appealing to whites turned off by the Democratic Party’s embrace of the civil rights agenda. The strategy chased many of the black loyalists out of the Republican Party. But the thinking was that the party gained far more in white votes than it lost in black votes.

That thinking was correct, with an emphasis on “was.” Now, due to racial changes in the population, that strategy causes more losses than gains — the reason why wise men and women of the party have called for a shift away from the strategy.

They face a major roadblock, however. Remember the white voters the party drew by appealing to anti-black sentiment. Well, now those voters make up a vital part of the Republican base, and they like the Southern strategy just fine, thank you. Immigration reform? No way, José. (Anti-black people tend to be anti-brown, too.)

Trump has exploited this ambivalence in the Republican Party. Rather than abandoning the Southern strategy, he has doubled down on it. For instance, thrilling the Republican base, the reality show star has called for a ban on Muslim immigrants and the erection of a wall along the Mexican border and, of late, has insinuated that black people cheat at the polls.

The Southern strategy, America learned, still has enough juice to win the Republican presidential nomination, but at a high cost: It chases away so many people of color and fair-minded whites that it imperils victory in the general election.

So Trump comes to a white suburb in the hypersegregated Milwaukee area to connect with black voters. His rhetoric thuds false. A true dialog would take place face to face, and it must begin with an apology from the showman about his fanning racial fears for political gain.

After all, many African-Americans have a hard time forgetting that Trump helped lead the charge to foist an aura of illegitimacy onto America’s first black president. Trump noisily demanded to see Barack Obama’s birth certificate, as if the commander-in-chief was an alien who must produce papers.