You are here: Home / Posts from Community / 300+ Strong movement to host 2nd annual community rally at Sherman Park
Share this... 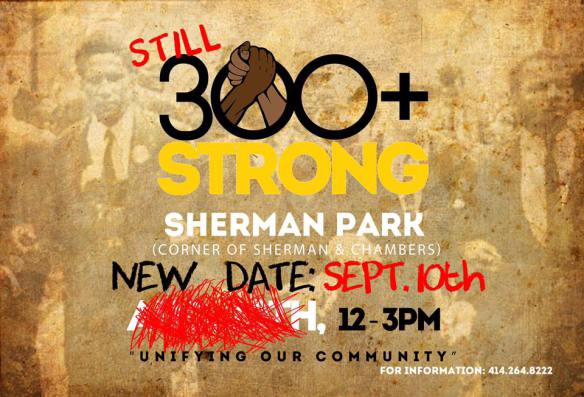 Bringing a close to the summer, on Saturday, September 10th, 2016 from 12-3pm, a collective of grassroots and youth serving organizations will host the 2nd Annual 300+ Strong Rally at Sherman Park. The rally will bring together hundreds of young people from across the city.

The 300+ Strong Movement was launched last year to address the unique challenges and realities black youth face in Milwaukee. The effort is led by an active group of black-led organizations who have committed to work together to wrap supports around youth connected to Milwaukee’s We Got This Initiative, Running Rebels Community Organization, Boy & Girls Clubs, and Universal Companies. Last summer they identified some 300+ youth, mostly young black males, coming through their doors on a regular basis. Since then, the group has expanded to include and collaborate with other black- led organizations and initiatives working with youth in Milwaukee’s hardest hit neighborhoods.

Similar groups involved in the movement include the Center for Youth Engagement, The Nation of Islam, Operation Dream, Flood the Hood with Dreams, FELLAS Magazine, Urban Underground, EX- Men United; the I Will Not Die Young Campaign, Heal the Hood; Brain, Brawn & Body, and Milwaukee’s Safe Zones Initiative. Together they are working to link and coordinate activities that offer year-round programs, exposure to career pathways and employment opportunities, and safe spaces where black youth can receive support and mentoring from older and young adult role-models at a crucial time in their lives when direction and guidance is needed most. Often times these groups and individuals and the work they do go unrecognized, largely operating under the radar. The movement centers and supports them – many overlooked or unknown by local funders and lacking capacity to compete with larger, well-connected, and better-resourced organizations with leadership and boards not always representative of the communities they serve.

Rahim Islam, President/CEO of Universal Companies which co-sponsors the effort adds, “300 Strong is the beginning of the functional unity that Milwaukee’s Black community must demonstrate in order to move ourselves forward. We have a lot of work to do and this is just the beginning”.

The group hosted its first community rally last August at the Washington Park Bandshell with nearly 500 youth and community residents attending. The inaugural rally featured speakers, community resources and entertainment all focused on sharing knowledge, spreading love, and bringing together and healing community. Given the city’s climate, this year’s rally will echo the same focus.

300+ Strong is rooted in the ongoing work of the Campaign for Black Male Achievement and Cities United, two national efforts jointly focused on strengthening local communities’ capacity to reduce violence and improve life outcomes for black men and boys. The two efforts are locally anchored in- part by Milwaukee’s Black Male Achievement Advisory Council and the City of Milwaukee’s Office of Violence Prevention. Both have been working with the 300+ Strong helping to connect dots between the assets on the ground and the resources and leadership at the city. The effort also aligns with President Obama’s My Brother’s Keeper Initiative which aims to establish cradle-to-career-and- beyond partnerships in communities that address barriers youth and young men of color face across the nation. Milwaukee accepted the challenge in 2014. A local MBK action plan is soon to be released.

“I’ve been working with 300 Strong all year to help connect them to my colleagues and the resources of the city. 300 Strong is an example of how we begin to turn the page from the things we’ve encountered this summer. It is a central component to the city’s commitment to ensuring public safety”, says 1st District Alderman and Common Council President Ashanti Hamilton, who also co- chairs the city’s Black Male Achievement Advisory Council. “The movement and its upcoming rally is more about creating and sustaining a network and continuum of support for young people and their families than just coming together for an event in the park.”

This year’s rally was originally scheduled for the weekend following the nights of “unrest and uprising” in the Sherman Park area. Requested by law enforcement, parks and elected officials concerned with safety, the decision was made to postpone and reschedule to a later date. In response, 300+ Strong joined other existing efforts and events the following days and weeks to demonstrate unity and reunite the community. The rally will focus on lifting up current efforts underway in and around Sherman Park, and the individuals and groups who have been working there day and night all summer long. Efforts like “Program the Parks”, is one such example led by community activists and organizers working with the area’s community association and district police station. They will continue to have a strong presence in the neighborhood through the fall and into the winter with support from 300+ Strong partners and the Office of Violence Prevention.

Victor and Dawn Barnett, Co-Executive Directors of Running Rebels Community Organization believe an even bigger impact could be made collaboratively. They are a key example of how more established and community rooted organizations can connect with the grassroots and link their resources and efforts together. “We have to make sure we let go of our own egos, our own agendas. It’s not about our logo getting pasted on something or our agenda being pushed. It’s about being a part of something bigger, something that can unify the city and our community,” said both.

The 2nd Annual Rally, complete with food, entertainment and community resources, aims to bring all those efforts and organizations together on September 10th to restore a sense of hope, safety, and community across all of Milwaukee, and particularly in the Sherman Park neighborhood.