You are here: Home / Community Voices / Creator of controversial mural responds to critics
Share this... 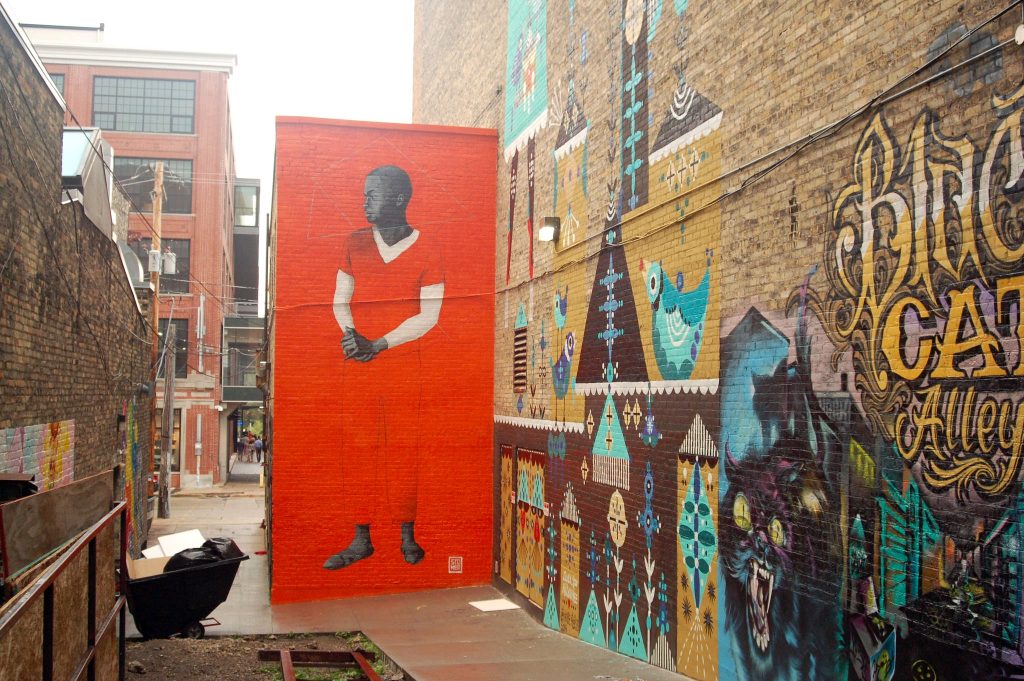 Local artist Adam Stoner created a mural in Black Cat Alley on the city’s East Side that was intended to address “Milwaukee’s painful legacy of incarcerating a higher percentage of black men than any other city.” In this piece Stoner responds to critics who have called the work “dehumanizing.”

To the communities who address my recent mural on mass incarceration:

I’ve heard a great deal of anger and pain in response to my work in the alley — and I think it’s time for me to respond with a statement, an open mind, and a desire to listen.

Devontay is a piece in a series I’ve been working on that considers mass incarceration and how we as white people disfigure the humanity of our black and brown brothers and sisters by projecting certain qualities onto them. We paint judgments in flat colors without dimension; and that’s what I’ve done here, in the spirit of a sharp critique of our American systems.

I expected the design of the mural to be controversial — I’m not black, and I had no intent to claim your experience, nor any ownership of it. Neither do I have any right or much human capital in the community to be a conduit for this conversation. I’ve been prepared, since day one, to turn this over to smarter, stronger voices than mine. We must give the floor to our black elders and leaders; their wisdom on the issue of mass incarceration will always trump my naïve white brush with it.

In the spirit of listening and learning, I want to invite the community to help me edit or change or paint over my piece if it has done damage to the cause. I can only imagine how painful it might be to look at an artifact of generations of oppression and segregation, day after day after day. I had not fully considered the very real traumatic correlations that my artwork might engender. This is magnified because it is public space; you can’t escape it.

But my error is glaring: by attempting to force a racial conversation among white folks with a deeply charged painting, I ran this risk of disrespecting the shrewd and knowledgeable black conversation with an image that is old-hat and tired and on the whole very saddening. Discourse about racism and systemic oppression is fraught with pitfalls, and perhaps this is mine. Your betterment as a people is in your own powerful and capable hands; it’s not for us white folks (who always talk too much in these sorts of things) to decide.

So the choice, I think, comes down to you. I know the stakes of this work, and I want to stand by it and see it through. But the jury is still out on whether this mural, Devontay, will be a tool for white conversion or an impediment to black hopes and black justice. If I set out to confront the “Casual White East-Sider” and ultimately undermined the true black voice, then the mural needs to change or go away.

I want to end with an apology. I want to apologize that my project did not begin with the community, or with a sense of hope. I am new to public art, and still learning how different it is from a gallery show: art doesn’t get to hover above social critique, and that’s extremely important if we really have any interest in dialogue.

I welcome continued conversation on this matter, especially from my critics, from whom I learn.