You are here: Home / News / Arts and Recreation / Milwaukee Rep program gives teens a chance to take to stage as paid performers
Share this... 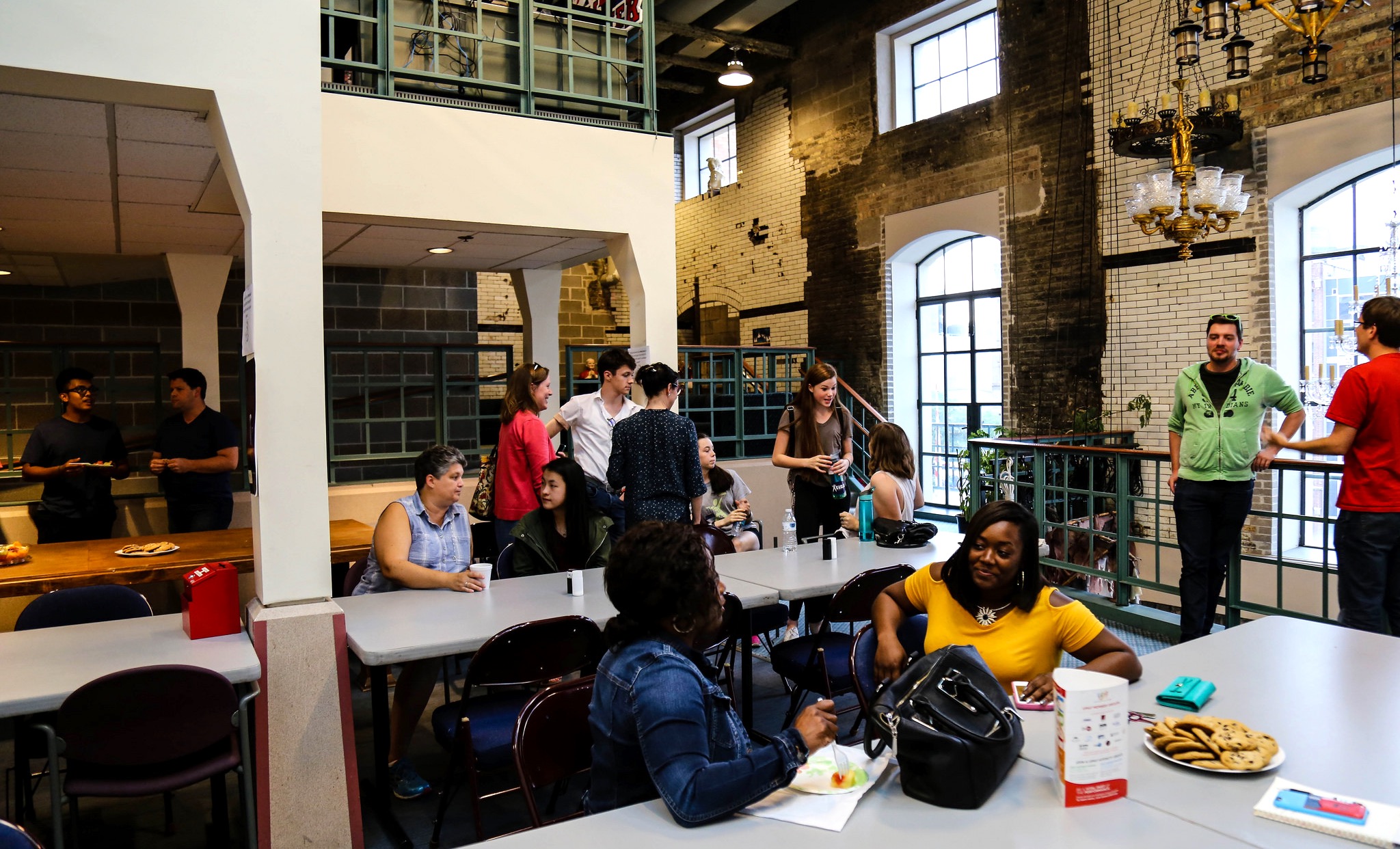 The Milwaukee Repertory Professional Training Institute meets the third Monday of each month. More than 200 people auditioned and 17 performers were cast. (Photo by Allison Steines)

Braylen Stevens started acting in the fourth grade at First Stage Children’s Theatre. His earliest productions included “Rudolph the Red-Nosed Reindeer” and “A Midnight Cry.” He has since starred in numerous church and community shows, as well as “A Raisin in the Sun” and “The Color Purple” at Milwaukee Repertory Theater.

Stevens said that recreating believable moments on stage is what fuels his love for acting. He is one of 17 teens chosen out of 200 contestants to participate in the Professional Training Institute (PTI) at The Rep.

Stevens recalled one incident in which he ate oatmeal on stage that had come right off the stove. “I was in the middle of delivering a line and I picked up the spoon full of oatmeal and stuffed my mouth not realizing how hot it was,” he said. “My words just turned into a blur. It was such a memorable funny moment. I think the audience got it too.”

At the first PTI session on Sept. 19, all of the young performers pulled red-cushioned chairs into a circle, sat down facing each other and introduced themselves. A black curtain draped the outer edges of the room, creating a warm theater ambiance; a buzzing energy filled the space.

“The program exists to showcase the talent among young people in Milwaukee,” said Community Engagement Director Leda Hoffmann. “At auditions I said, ‘show us your best talent.’ I got a lot of singing and dancing. I also got some stilt walking. There was a contortionist. One person even sang while taking apart a Rubik’s Cube.” 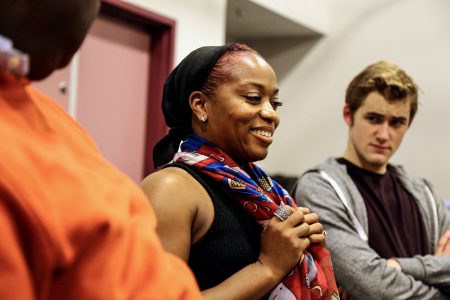 Alexis Roston, the actress who plays Billie Holiday in “Lady Day at Emerson’s Bar and Grill,” tells young performers about her personal experience in show business. (Photo by Allison Steines)

PTI participants meet at The Rep for a master class on the third Monday of each month from 5 to 8 p.m.

“Each class is taught by different professional artists and will emphasize performance training,” said Hoffmann. “The teachers will create what they want the class to be.”

Alexis Roston, the actress who plays Billie Holiday in “Lady Day at Emerson’s Bar and Grill,” and Abdul Hamid Royal, the musical director, taught the first master class on the realities of show business.

“This is a business, and the people I know in this business that are successful aren’t halfway in,” said Royal. “There will be a day when you get through the awards, the applause, you finish bowing and you still have to figure out…how am I going to pay the mortgage, the kids are going to private school, I want to get my teeth done, a pedicure sounds nice, or hey it’d be great to eat something other than peanut butter and jelly.”

Sam Landmark put it this way, “If I couldn’t perform the first thing I would do is die.”

Landmark lives in Kenosha where he attends Tremper High School. Six of his 11 siblings were involved in theater for a long time, which inspired him to give it a try. Landmark’s passion for theater manifested at an early age; at 8 years old he landed his first role as a fish in “Seussical” at Spotlight Youth Theater. Since then, he has been cast in 25 musical productions. 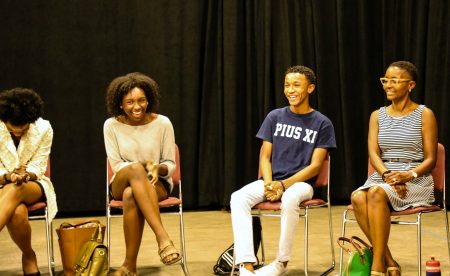 “The most memorable was probably when I was in Godspell,” said Landmark. “We were doing a number and I did the splits and my pants ripped.” Landmark said he ran backstage after the mishap, but because his song was next, there was no time to fix the tear. His pants were taped back together and he had to waddle around on stage afraid to separate his legs. Landmark remembers the experience as nerve wracking.

Roston advised performers to use the unexpected to their advantage within show business. For her, the unexpected is that she is 4’10” with a booming voice. She said the moments and qualities that set you apart also make you stand out.

Roston also told the performers to nurture their passions and set goals for themselves. “Maybe you’re thinking ‘I want to be on Broadway’ or ‘I want to have performed at all the regional theaters in my town.’ Whatever it is, set a goal and get to it.”

Liebenstein has been working on her theater goals since she was 6 years old, starting at the former Modjeska Youth Theater. She saw her cousin in the role of Peter Pan there, which inspired her to join the theater. Liebenstein, a junior at Milwaukee High School of the Arts, was adopted from China when she was 1 year old and has lived in Milwaukee ever since.

“When I was in ‘Christmas Carol’…the first time I saw the curtain go up and I saw the audience and how huge it was… it was outstanding,” said Liebenstein. “I was so happy my dream had come true and I was going to be performing on a main stage at the Pabst. It was a breathtaking moment for me.”

Throughout the program PTI performers will be challenged to improve their skills by working on body movement, voice, dialect, character development and more, according to Hoffmann.

“Our goal at the end of this is the summer performance in which all of the kids will be paid as professionals,” Hoffmann added.

The final performance will take place in mid-July 2017. The production and director have not yet been selected.