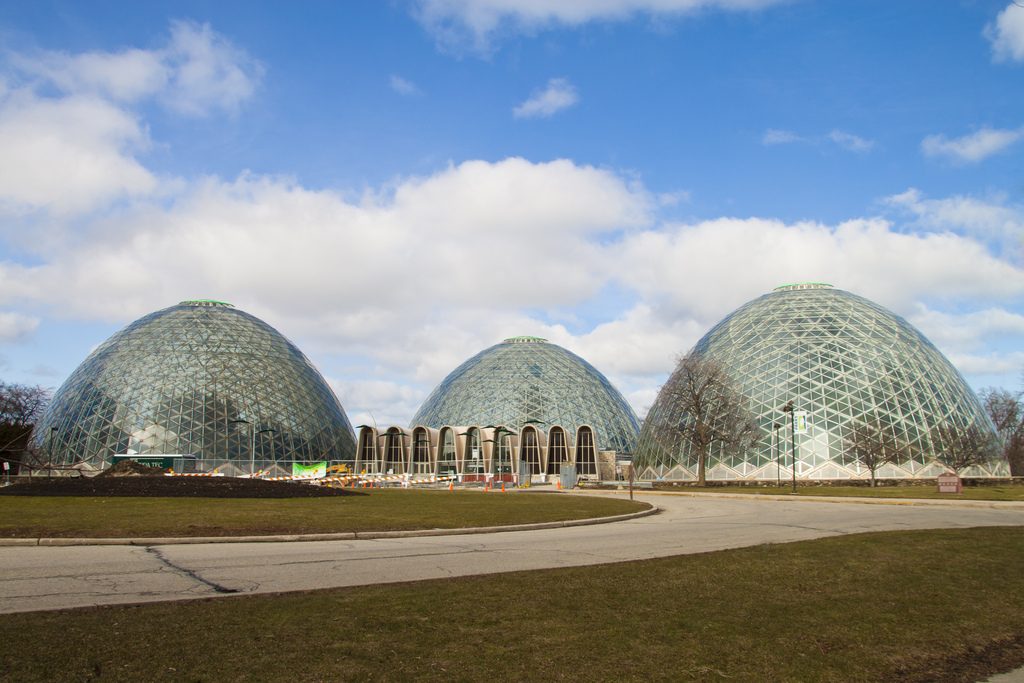 The National Trust for Historic Preservation has named Milwaukee’s Mitchell Park Domes to its 2016 list of America’s 11 Most Endangered Historic Places. This annual list spotlights important examples of the nation’s architectural and cultural heritage that are at risk of destruction or irreparable damage. More than 270 sites have been on the list over its 29-year history, and in that time, fewer than five percent of listed sites have been lost.

A beloved Milwaukee institution for generations, a unique engineering marvel and a highly significant example of midcentury modern architecture, the Milwaukee Domes have been a center of community life and a tourism destination for more than 50 years. In addition to their stunning architectural features, the Domes are marvels of modern engineering featuring the world’s first “conoidal”—or cone-shaped—domes.

After a small piece of concrete was found on the floor of one of the Domes early in 2016, leadership of Milwaukee County—which owns the Domes— temporarily closed the building to the public. The County estimates that it would cost as much as $70 million to repair the domes. Based on these initial estimates and other factors, key county and park officials say the Domes may have outlived their usefulness and could be demolished. Local advocates are encouraging the County to pursue a planning process that fully explores alternatives that would preserve the Domes.

‘“The Domes” are stunning examples of midcentury modern architecture that have also been a key part of community life in Milwaukee for more than 50 years,” said Stephanie Meeks, president and CEO of the National Trust for Historic Preservation. “From Miami’s Marine Stadium to Houston’s Astrodome, iconic pieces of 20th century modern architecture across the country face unique maintenance needs as they age. Rather than needlessly sacrifice this unique national treasure, local leaders owe it to the public to continue to explore a solution that preserves the Domes for the benefit and enjoyment of future generations.”

Members of the public are invited to learn more about what they can do to support these 11 historic places and hundreds of other endangered sites at www.SavingPlaces.org/11Most

The 2016 list of America’s 11 Most Endangered Historic Places (in alphabetical order):

Azikiwe-Nkrumah Hall at Lincoln University – Lincoln, Pa. The oldest building on the campus of the first degree-granting institution in the nation for African Americans, this hallowed building currently stands empty and faces an uncertain future.

Charleston Naval Hospital District – North Charleston, S.C. The historic district played a prominent role during WWII as a primary re-entry point for American servicemen injured in Europe and Africa. Now threatened by a proposed rail line, this important historic resource is at risk of being largely destroyed.

Delta Queen – Houma, La. This steamboat was built in 1926 and today is among the last of her kind. Federal legislation that would enable this prestigious ship to return to overnight passenger cruising remains a key piece to securing the Delta Queen’s sustainability and future.

Historic Downtown Flemington – Flemington, N.J. Historic buildings at the core of the town that hosted the ‘Trial of the Century,’ the Charles Lindbergh baby kidnapping trial, are threatened by a development proposal that would demolish the iconic Union Hotel along with three other adjacent historic buildings.

James River – James City County, Va. Jamestown, America’s first permanent English settlement, was founded along the banks of the James River in 1607. The river and landscape, also named to this list by the Trust in 2013, remain threatened by a proposed transmission line project that would compromise the scenic integrity of this historic area.

Sunshine Mile – Tucson, Ariz. This two-mile corridor on Tucson’s Broadway Boulevard features one of the most significant concentrations of historic mid-century modern architecture in the Southwest. This unique collection of properties face threats from a transportation project that would require demolition.

About the National Trust for Historic Preservation