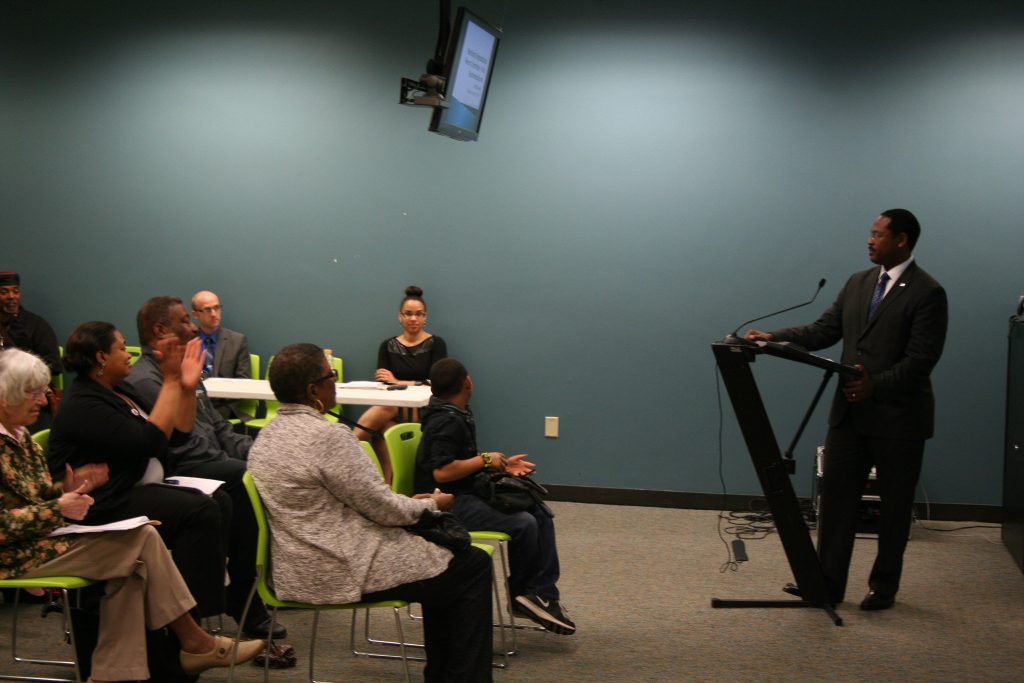 Common Council President Ashanti Hamilton speaks about RPP at a press conference in May. (Photo by Jabril Faraj)

This story is part of a Special Report on the Residents Preference Program, which is meant to provide opportunity for minorities in the construction industry, and can help address unemployment and crime. But it must be better monitored, funded and enforced.

Soon after the 2008 market crash, when many in Milwaukee were struggling to find work, the City of Milwaukee passed the Milwaukee Opportunities Restoring Employment (M.O.R.E.) Ordinance, which applied the Residents Preference Program to city-funded development projects and required 40 percent of the workers to be unemployed or underemployed residents.

In 2009, the city asked for $599 million in stimulus funds from the federal government. That same year, the Common Council passed a stimulus plan, which included funds for new developments.

Common Council President Ashanti Hamilton, who sponsored the M.O.R.E. Ordinance, acknowledged the benefits of the stimulus package, but said it fell short of providing opportunities for those who needed it most.

“We had large-scale public works projects that the city was invested in that created a large number of jobs. But, because we didn’t have the type of pipeline that was necessary in order to bring people through this process, and then keep them working afterwards … we didn’t take full advantage of that opportunity,” Hamilton said.

Milwaukee NAACP President Fred Royal said of the ordinance, “It had the greatest intent when it was written but it didn’t have the planning … on how to enforce it.”

Chapter 355, which was part of the M.O.R.E. Ordinance, requires an audit of the Residents Preference Program every three years. The first audit, scheduled to be done in 2012, was not commissioned or completed as the result of an “oversight,” according to Nikki Purvis, manager of the Office of Small Business Development (OSBD) since October 2014. The OSBD, an arm of the city Department of Administration, is responsible for monitoring and enforcing RPP.

“There really is no excuse for it,” Purvis said in an August 2015 interview. “Once we were made aware that it had not occurred, we made sure that it was taken care of.”

City of Milwaukee Comptroller Martin Matson, who was elected in 2012, has a different take on why the audit wasn’t completed. Matson said the Comptroller’s Office identified the requirement for an RPP audit when it conducted a needs assessment after he took office. The assessment, which classified audits as high, medium or low risk, found that high-risk audits were being performed regularly but some of the other 103 required audits had not been conducted. That included RPP, which was classified as low-risk, according to Matson.

“Ideally, you’d want to do all audits within three years,” Matson said. “I would’ve had to have doubled the staff, which, of course, they won’t allow me to do. So, my hands are tied. We asked for more (staff); they told us ‘no.’”

In fall 2014, Royal started asking questions, and the RPP audit was fast-tracked. “It (the audit) was on the list to be done, but it got pushed up,” said Matson.

The audit, which was completed in November 2015, found inaccuracies in RPP’s reporting. “Monitoring procedures for the projects tested were performed irregularly, and required documentation was not obtained or retained consistently,” the audit said. It blamed OSBD for the problems, but concluded the staffing requirements on those projects were still met.

Because the city does not have the capacity to monitor projects in-house, OSBD delegated that responsibility to developers, who are required to hire a third party to monitor compliance with the ordinance. Hamilton said the model has been costly, is not consistent and lacks transparency. Despite repeated requests from the Common Council for more “worker-level” detail, none was provided, according to Hamilton.

“We were asking for reports that they (OSBD) don’t have the capability of producing,” said Hamilton in a November 2015 interview, before he was elected president of the Common Council. “They don’t even possess the data to actually produce the reports. How is it that you can actually fulfill the requirement of the ordinance and you don’t have the data to do the report?”

Hamilton added, “We can’t say that job creation, creating opportunity is a priority for the city and creating a pipeline to restoration and stability for our most vulnerable citizens in the city is important and, then, the main program that we have to provide access to that opportunity is not being measured.”

Recommendations from the comptroller’s audit include requiring an external company to track and report participation, utilizing a single monitoring software to ensure consistency, redefining the conditions that trigger the RPP requirement to be more specific and including measures that would compel developers who receive financial assistance from the city to comply with the requirements.

Since January 2015, the city has included a provision in all development agreements requiring contractors to utilize monitoring software called LCPtracker.

Earlier this year, the city’s Workforce Organizational Reform Committee (WORC), which Purvis was a part of, updated RPP with tougher sanctions for contractors or developers that fail to meet requirements. The WORC also created a commission to review compliance, performance and other aspects of the program.

Purvis said monitoring always plays a critical role in enforcement, noting that she has confidence in the process now in place. However, because there are so many departments involved in RPP’s implementation, “Part of that process is having more consistent and frequent communication internally so that we can address any issues should they arise.”

She added, “There’s a commitment from the mayor and from the administration that we will continue to move forward in ensuring that we are providing information to the community and to the elected officials, and being as transparent as possible so that we can have the honest conversations about where the program is.”