You are here: Home / Home / Carousel / Chess Federation teaches kids to ‘think a couple moves ahead’
Share this... 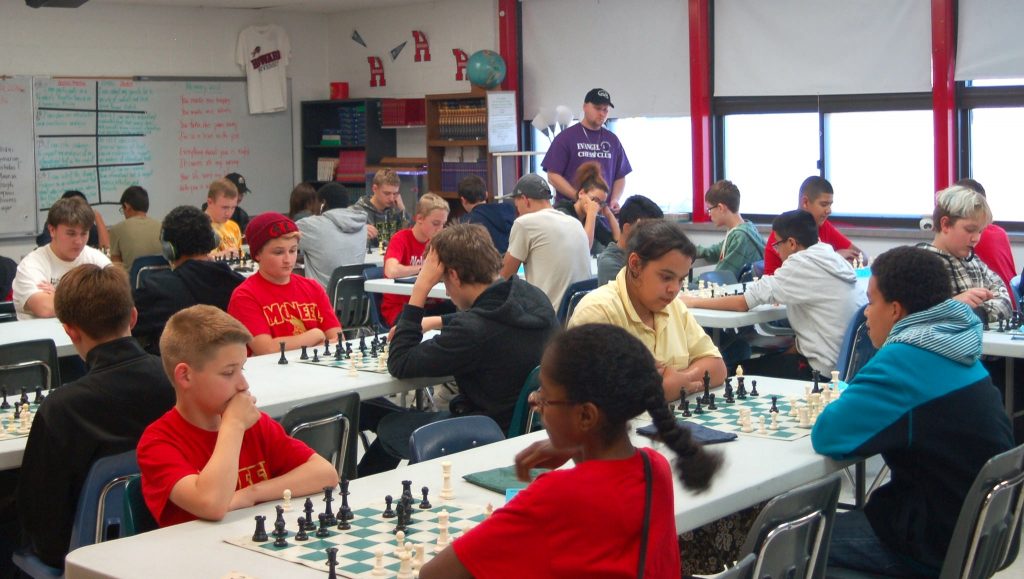 K12 division participants play in the last round of the Wisconsin Scholastic Chess Federation tournament at Siloah Lutheran School. (Photo by Brittany Carloni)

Jayden Martinez, a fifth-grade student at Escuela Vieau, 823 S. 4th St., was bursting with excitement at 3 p.m. on a recent Saturday.

Jayden, 10, spent the entire day playing chess at the Wisconsin Scholastic Chess Federation tournament at Siloah Lutheran School, 3721 N. 21st St., along with five of his classmates from Escuela Vieau and 65 other students from chess clubs in the Milwaukee area and beyond.

Students in grades K-3 played in the primary division, and grades 7-12 competed in the senior division.

The Wisconsin Scholastic Chess Federation, which works with chess clubs at schools, churches and community groups around the state, promotes the game through programs such as chess schools, Chess in the Parks, scholarships and tournaments.

“Chess changes kids behavior and gives them self-esteem. It teaches them a new way of thinking,” said Bob Patterson-Sumwalt, executive director of WSCF. He founded the organization in 2004. 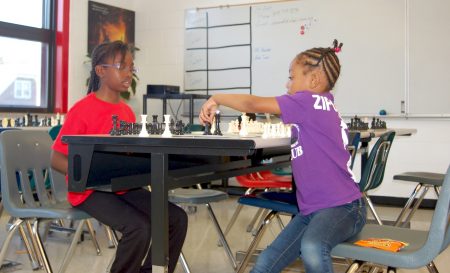 Chess teaches children “not to react to their first instinct and rather to look for multiple options,” Patterson-Sumwalt said. “If they do that it’s going to change how they approach problems their whole life.”

“In chess, you can’t do the first good idea that comes to your head. You have to slow down and think a couple moves ahead,” she said. “Because of that I think my girls are pretty calm and more thorough-thinking about consequences.”

“Sometimes they lose and when that happens they lose gracefully,” she said. “They’re always excited to learn and improve.”

Patterson-Sumwalt gained experience leading chess clubs and directing chess tournaments while teaching at schools in Colorado and Kansas. When he and his family moved to Wisconsin, he said there were only two chess tournaments a year for children in the state.

“What was needed were one-day tournaments locally, that local clubs could host,” he said.

So Patterson-Sumwalt began a chess club at his son’s elementary school in Mequon, which eventually became the Mequon Scholastic Chess Association. As the organization grew with more tournaments and more interest from other school chess clubs, the group became the Milwaukee Area Scholastic Chess Association. A few years later the organization changed its name to WSCF.

Today Patterson-Sumwalt teaches six chess classes a week at various schools in the Milwaukee area and a class for adults about how to run a chess club. He works with about 20 chess groups around Milwaukee and about 80 clubs statewide. 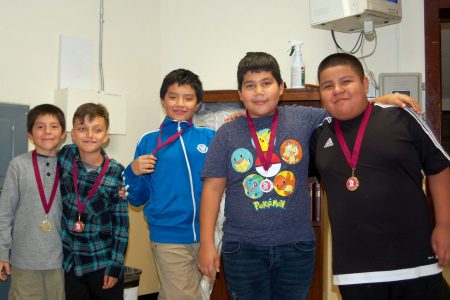 Students from the Escuela Vieau chess team pose for a photo with their medals from the chess tournament. (Photo by Brittany Carloni)

Patterson-Sumwalt also organizes the WSCF tournaments. WSCF has three regions of chess play, which include Milwaukee, Sheboygan and Green Bay. This year the organizations will hold about 50 tournaments throughout the state. The WSCF tournament season starts in mid-October and runs through the end of April with events held almost every weekend.

Wright said the club has created a sense of community among the students in the group.

“It’s a good experience because they are learning how to be a good sport and how to persevere,” Wright said. “It’s really great community building and confidence building.”

Wright did not initially know how to play chess, but she knew about the game from watching her daughter participate in WSCF tournaments for Golda Meir School. Wright eventually contacted Patterson-Sumwalt and WSCF for suggestions about how to start a club.

“Chess clubs are growing in MPS, which I think is fantastic,” Wright said. “It’s really nice to see kids from Milwaukee being successful in an academic and challenging area.”

Henry Stollenwerk, 8, is a third-grade student in the chess club at Fernwood Montessori School. He likes the strategy involved in the game. “I like having fun and playing other people,” he said.

Kei Hardy-Wright, an eighth-grade student at Golda Meir School, has played chess since fourth grade. “I like to imagine chess is two kingdoms and you get to kill off each other’s pieces, so it’s kind of fun,” said Kei, 14.

Kei said she prefers to play chess for fun, but tournaments allow her to see how well she can do. At the Siloah Lutheran School tournament she won four out of six games.

Patterson-Sumwalt said he is looking for more leaders to start chess clubs at schools, churches or other community organizations.

“I’d like to be able to reach more kids and more parents and more teachers, and teach them that this is not a hard thing to do,” he said.