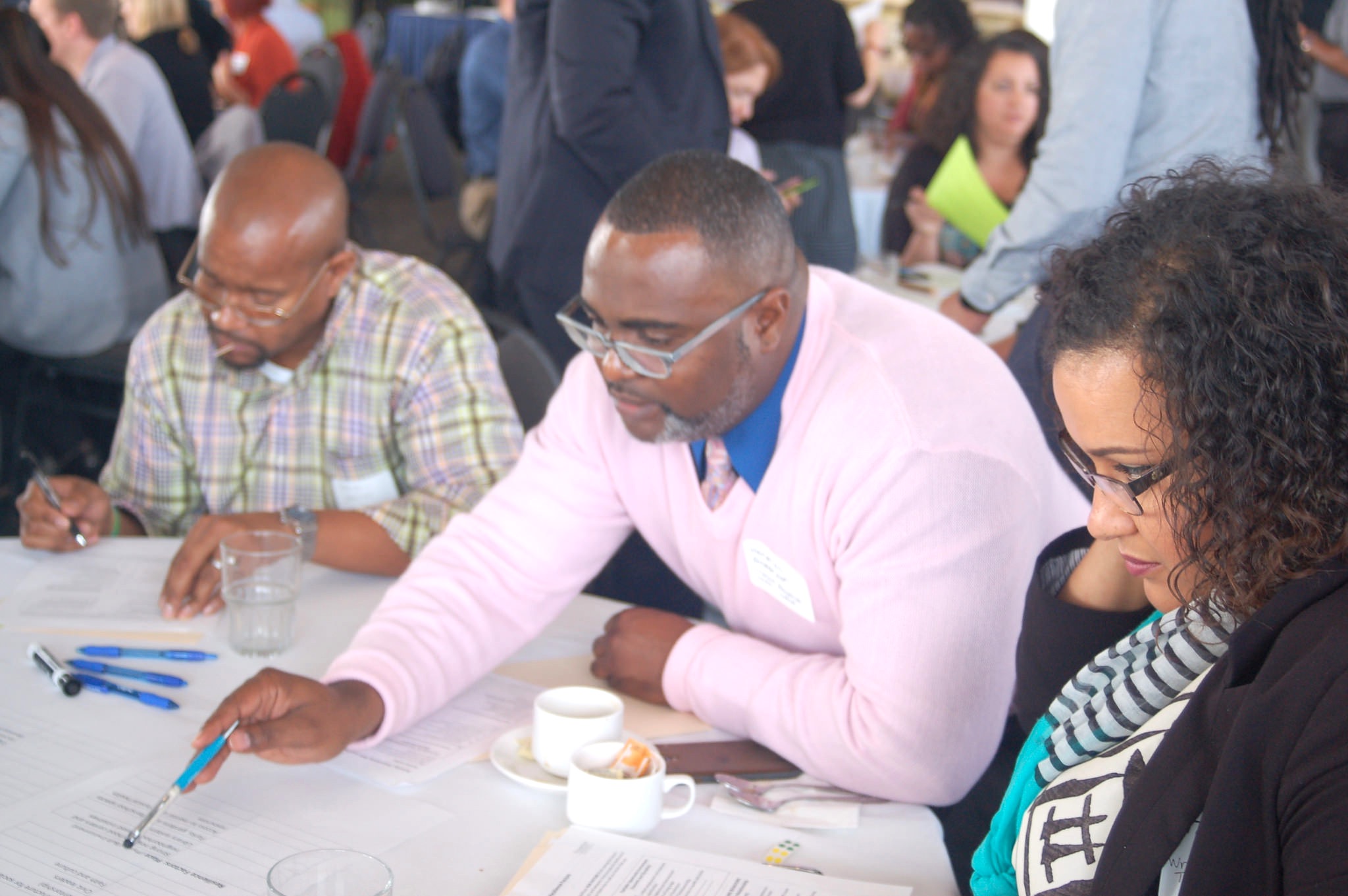 Attendees at the violence prevention launch rank the factors that contribute to and prevent violence in the community. (Photo by Andrea Waxman)

The recent launch by the city’s Office of Violence Prevention of a comprehensive strategic planning process provided a great opportunity to begin building a united front against violence, said Khalil Coleman, co-founder of the Safe Zones Initiative, a program focusing on gun violence prevention.

The process brings in community residents who are usually excluded from the discussion and “allows those voices to be heard,” Coleman added.

Coleman was one of more than 100 attendees representing nonprofits and grassroots community, business, government, religious, public safety and health organizations at the recent event held at Discovery World. The planning process is funded by a $93,000 Advancing a Healthier Wisconsin Endowment grant. The Prevention Institute of Oakland, California, is providing expertise and technical assistance.

Reggie Moore, director of the Office of Violence Prevention (OVP) and his team invited a cross section of the community to the launch to make sure a variety of people were engaged from the beginning. “I was really honored to hear directly from (them) about what their concerns and their aspirations are for increasing public safety in Milwaukee,” Moore said.

Community member Sai Norman said, “Police come into our neighborhoods and do not respect us. When they come, the first thing they do is reach for their guns. We need to police ourselves.”

Attendee Bianca Williams, 25, founder and director of A Cry for Help Foundation, a grassroots effort that provides housing, food and clothing to those in need, suggested that the event should have included more youth. “I believe the main ones who are causing a lot of this violence and stealing cars are the youth. So it’s very important that they be at the table,” she said. Williams also questioned the need for experts from out of state who have to start at the beginning to understand the community. 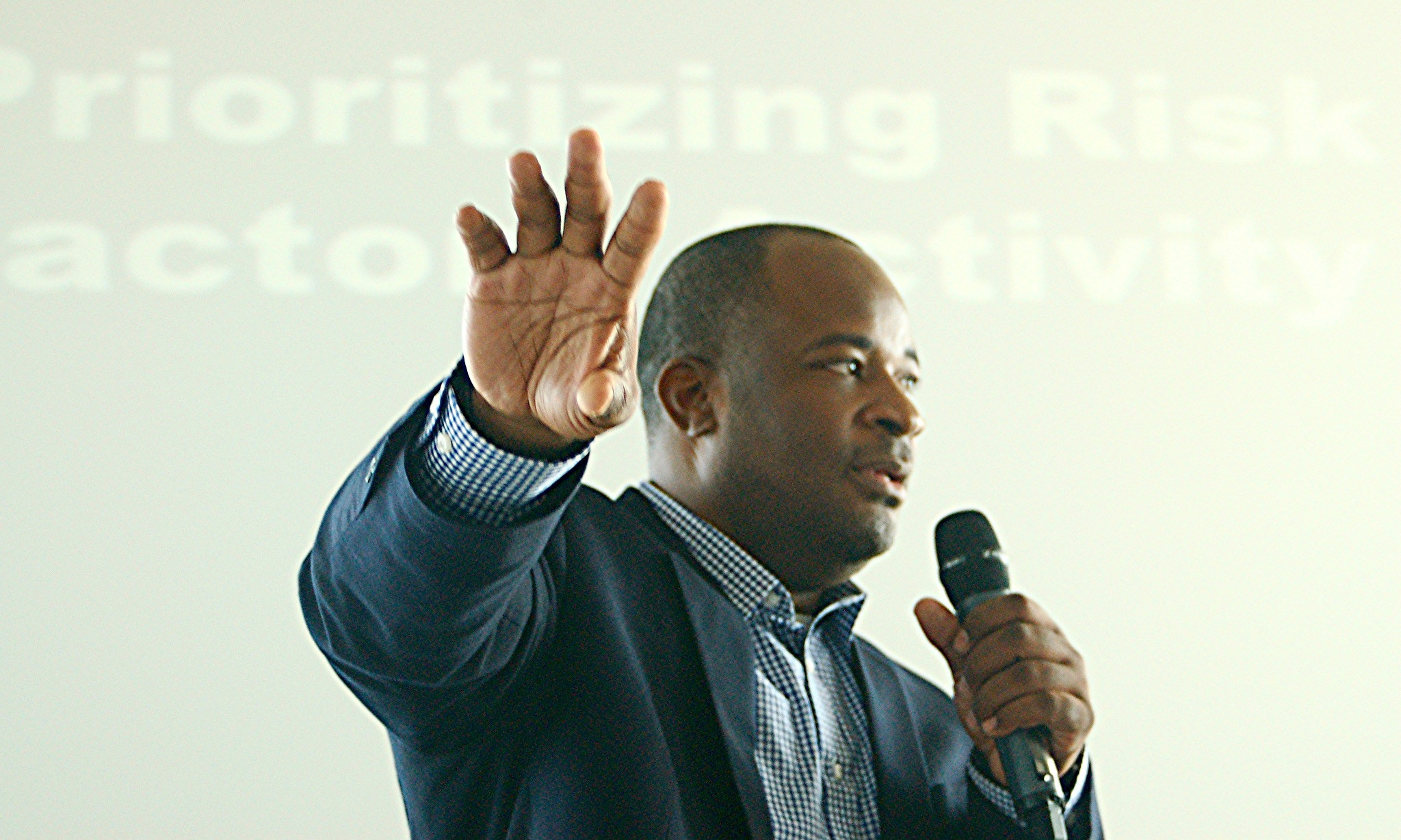 Reggie Moore, director of the Office of Violence Prevention, speaks to community representatives at the launch of the violence prevention planning process (Photo by Andrea Waxman)

Moore said in an interview that his team facilitated a condensed version of the session with a group of young people on the evening of the launch, from organizations including Running Rebels, Urban Underground, St. Charles, and PEARLS for Teen Girls. The youth were invited to contribute their insights.

Moore also explained that the Prevention Institute is one of only two large organizations specializing in violence prevention planning and was selected for its extensive experience and excellent reputation. “They’ve been instrumental in helping many cities around engaging in these planning processes,” he noted.

“If there was a surgeon in another community who was renowned for finding a cure to a particular disease that affected a significant portion of Milwaukee’s population, we would be irresponsible not to work with them or engage them,” Moore said. Milwaukee is seeking the best thinking, best practice and best research from around the country to help come up with solutions, he explained.

The institute approaches violence prevention using a framework that analyzes the aspects of a community that encourage or discourage violence. It views trauma as both a cause and consequence of violence. Experts in local communities and the federal government are looking at violence as a community issue and not just an individual health issue, Moore added.

During a presentation that was mostly focused on process, Prevention Institute representatives noted that violence prevention efforts are most successful when public health, not criminal justice, is at the center. Poverty alone does not cause trauma; rather it is inequality that is traumatizing. According to institute board member Howard Pinderhughes, its approach addresses both interpersonal and structural violence, the systematic ways in which social structures harm or disadvantage individuals. Pinderhughes is also chair of the Department of Social and Behavioral Sciences at University of California, San Francisco.

“I think (the discussion) is really broad right now,” but the vision and the goal are good and the success of the process will depend on the participants coming together, Cooper said.

Noting that he grew up outside of the city, Cooper added, “It’s important to hear from people who did grow up (in the central city) and I will try to be humble and hear more input than give more input.”

The Prevention Institute, which focuses on increasing equity in health and safety, has been the lead consultant in 10 cities creating similar violence prevention plans. It also has led technical assistance for 25 cities and provided expert review of plans for a number of other cities, according to Lisa Fujie Parks, program manager. Since September, the institute has gathered information about Milwaukee through surveys, interviews, at the launch and at a steering committee meeting.

Opinions are widespread and will continue to be collected, said Parks. So far, information gathered at the launch and elsewhere indicate that significant contributing factors to violence in Milwaukee include a lack of access to employment and other opportunities; segregation; disconnection between residents and organizations; and limited trust between community and government.

Moore noted that there will be many engagement opportunities over the coming months to go deeper into what strategies community members would like to see for reducing and eliminating violence.

The Office of Violence Prevention expects to schedule a second planning meeting in January. The strategic plan is expected to be drafted by spring and made public in early summer.

Teens ‘speak out’ about sexual violence

WCS is ‘friend for the friendless’