You are here: Home / Home / Carousel / Arts @ Large and MPS ‘Fill the Gaps’ in arts education teachers in the district
Share this... 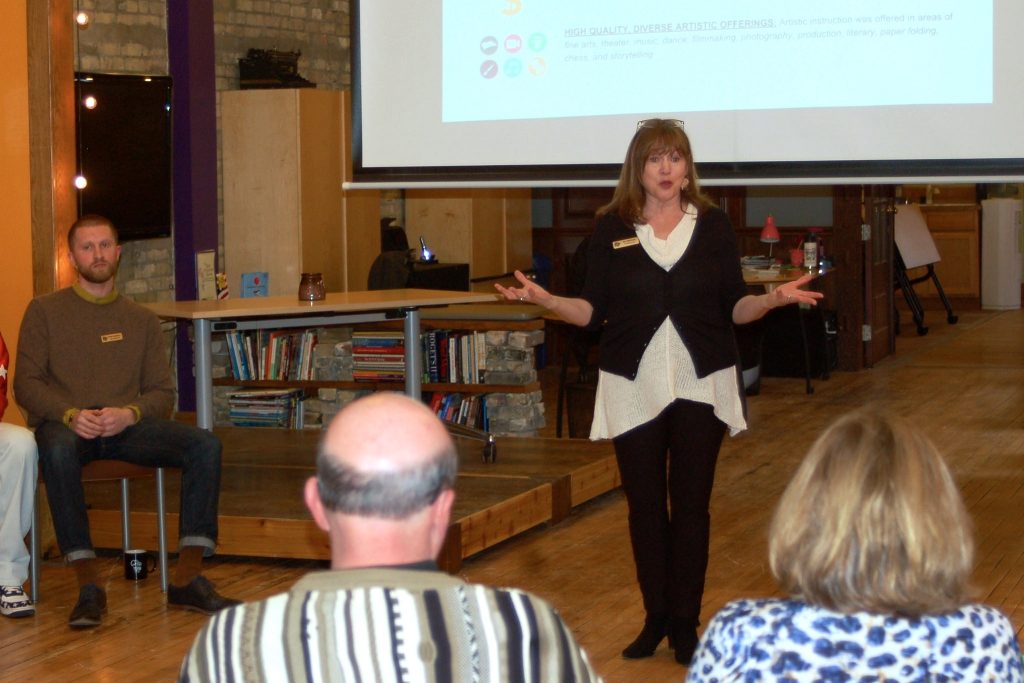 Editor’s note: This article is one of an occasional series profiling the 15 finalists for the Milwaukee Awards for Neighborhood Development Innovation (MANDIs). The Arts @ Large Fill the Gaps initiative is a finalist for the PNC Trailblazer Award, which recognizes an innovative approach to a community challenge.

Deborah Jolitz, the fine arts manager for the Milwaukee Public Schools, had a problem. In fall 2015, more than 25 schools were in need of arts education services and there were no certified teacher applicants for the available positions.

Jolitz discussed the situation with Teri Sullivan, founder and CEO of Arts @ Large, who suggested using Milwaukee artists to fill the gaps in the identified schools.

“This community is filled with artist educators that are not only amazing at their own craft, but are amazing at working with students,” Sullivan said. “They’re not licensed, but they can fill those gaps temporarily until we can build back the pool for licensed teachers.”

The Arts @ Large staff and MPS arts administrators worked together to plan the “Fill the Gaps” initiative. MPS created Arts @ Large in 2001 with a grant from the U.S. Department of Education. In 2005 Arts @ Large became a nonprofit with the goal of providing integrated arts learning experiences for MPS students through programs such as artist residencies. 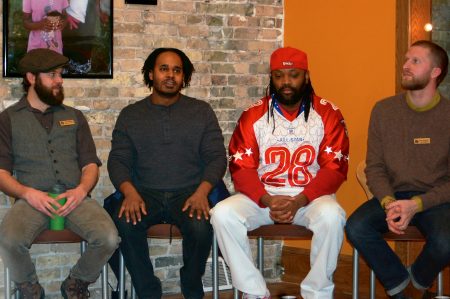 Marquis Gilbert (second from left) shares his experiences working with his cousin Dwight Gilbert (third from left) as artist educators in the “Fill the Gaps” initiative as Sean Kiebzak (far left) and Evan Sandherr (far right) from Arts @ Large look on. (Photo by Brittany Carloni)

After MPS approved Fill the Gaps, Arts @ Large held an information session and speed teaching interviews for interested artists in Milwaukee. The organization also provided professional development workshops to train the artist educators for the classroom. Once artists and schools were matched, the first residencies started in February 2016 and ran through the end of the 2015-2016 school year.

Fill the Gaps has continued during the 2016-2017 school year; more than 40 MPS schools were in need of arts educators. This school year, Arts @ Large has expanded professional development training and created mentorship opportunities for artist educators.

MPS also has worked with the University of Wisconsin-Milwaukee to create an alternative certification program for visual artist educators who want to get a teaching degree. Arts @ Large, MPS and Cardinal Stritch University also collaborate through artsHUBmke, which is a program that trains college education students, classroom teachers, arts specialists and artist educators on how to integrate arts in their teaching.

Arts @ Large is not able to fill all the gaps in MPS alone. Other arts groups in the city, such as the Wisconsin Conservatory of Music, Milwaukee Children’s Choir, Black Arts MKE and Tessa’s Black Entertainment and Youth Center are also providing artist educators.

During the 2015-2016 school year Mark Weinberg and Jenny Wanasek, co-founders of the Center for Applied Theatre, were part of Fill the Gaps at Lancaster School, 4931 N. 68th St., and LaFollette School, 3239 N. Ninth St. This year Weinberg and Wanasek, who have worked with Arts @ Large since the organization began, are at Westside Academy I, 1945 N. 31st St., and Westside Academy II, 1940 N. 36th St.

During Weinberg and Wanasek’s residency at Lancaster they created videos with students, and at LaFollette they led teamwork games and image theatre, which allows participants to move their bodies to demonstrate scenes of problems and transformations.

“It’s so satisfying to see their faces light up when they get a chance to be creative and to be affirmed for that creativity,” Wanasek said about working with students through Fill the Gaps.

Dwight and Marquis, who have worked with Arts @ Large for 10 years, also were Fill the Gaps artist educators at Lancaster during the 2015-2016 school year and this year they are working at Hi-Mount Community School, 4921 W. Garfield Ave. During their residency at Lancaster, Dwight and Marquis worked with students to create music videos about money and the school’s mantra, known as the Knight’s Code.

“I was very heavily arts-influenced as a youth and it kept me disciplined and out of trouble,” said Marquis, a former violinist and MPS graduate. “It means a lot to be able to give what I learned through all those years of studying and be able to make it culturally relevant for today’s kids.”

For Dr. Marcus Arrington, principal at Dr. Martin Luther King, Jr. Elementary, 3275 N. Third St., the artist educators from Fill the Gaps have been “a breath of fresh air.”

Arrington looked to Arts @ Large for artist educators that fit the school’s focus as an African- American immersion school. Along with visual art and dance, the school also had artist educators from African drumming group Jali Kunda.

Arrington said without Fill the Gaps he would not be able to afford to bring groups such as Jali Kunda to the school.

“They may have been willing to do a performance or a couple workshops, but to actually have them from February to May, it was beautiful,” Arrington said.

Fill the Gaps has helped Arrington create the meaningful school experiences he wants to provide his students. “I want children to love school and if they love drumming and that can help with attendance and help them be engaged and have something to look forward to, bring it on,” he said.

Jolitz and Sullivan’s goal is to have certified teachers back in classrooms, but for now they continue to work together to make sure MPS students have arts opportunities.

“It’s our duty as a nonprofit organization to collaborate effectively with the district to make certain that every child has an equitable education,” Sullivan said. “That’s what our job is every day and we feel as if we’re making a monumental difference in the lives of so many students that otherwise wouldn’t have those opportunities.”