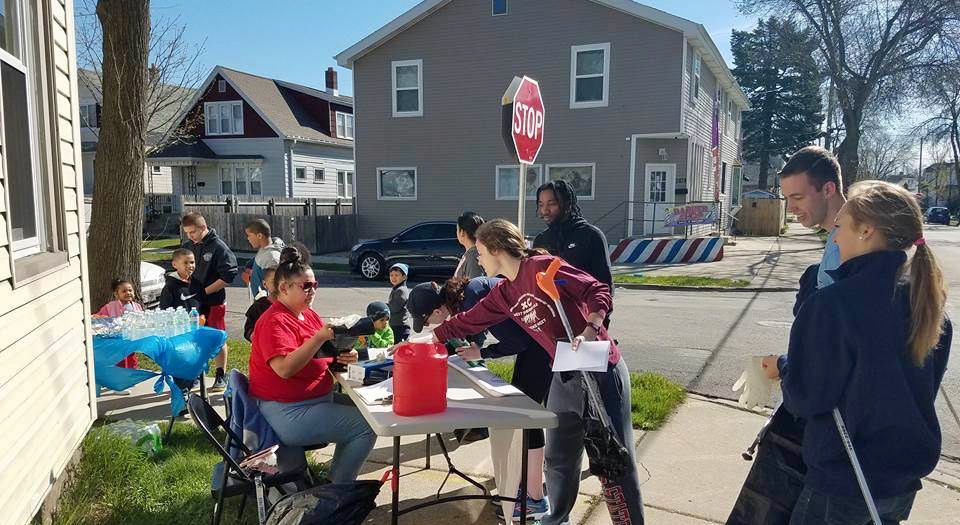 Jason Biernat, who grew up on S. 7th Street between Oklahoma Avenue and Manitoba, reports that he sees progress in the efforts to overcome the divides in Milwaukee’s 14th aldermanic district.

Last year I painted a picture of diverging fortunes in Milwaukee’s 14th District, which covers prosperous Bay View in the east, and the struggling neighborhood of Polonia and portions of Lincoln Village and Morgandale west of I-94. I called for three actions to overcome the divide and chart a brighter future for the district:

To my surprise, after just a year, I can report progress on all fronts, some of which was already underway.

City services in a struggling neighborhood

One service request won’t turn around a neighborhood. But dozens of requests by dozens of people will, over time, have a positive impact.

I did a neighborhood sweep along Oklahoma Avenue between Chase and S. 6th streets last summer. There was graffiti on an abandoned factory, garbage, dead trees and lots of weeds. This stretch of Oklahoma is the main link between Bay View and Polonia.

After a dozen submissions through the city’s (not-so-user-friendly) service request system, city departments got to work. Graffiti was the first to go, then a local business cleaned-up its dying “landscaping,” and watering bags appeared on boulevard trees to give them a boost. Constant follow-up with city departments and assistance from Alderman Tony Zielinski were required to really get things moving. This stretch of Oklahoma Avenue is better today, but work remains to be done to send a positive message when entering Polonia.

Most of the reaction I received from last year’s article was about the loss of the tree canopy along S. 7th Street. I’d be remiss if I didn’t report back that there are 10 new street trees on S. 7th Street alone. They are small but mighty. Paul Biedrzycki, director of Disease Control and Environmental Health at the City of Milwaukee’s Health Department, said that understanding “the significant public and environmental health benefits of street-level tree planting is gaining momentum across the country. There are interesting return on investments from trees to decrease particulate matter… which is linked to respiratory and cardiovascular illnesses and death, cool urban environments during heat waves, and provide erosion and storm water benefits in addition to aesthetics and improvement in community social capital.”

In comes the BID and better neighborhood organization

It’s easy to get something started but sustaining it is the real challenge.

Neighborhood activist and local block watch captain Tracy Alvarez, Zielinski and a Business Improvement District known as the Crisol Corridor (crisol means “melting pot” in Spanish) are working to bring new public murals to the old North Shore Line retaining walls at S. 6th and Oklahoma Avenue. My mom, Karen Biernat, sent me the Milwaukee Mural Map and pointed out a mural on the side of the Southside Gardens. I reached out to the artist, Jon Bartels and learned that he had grown up in Polonia and he expressed interest in the S. 6th and Oklahoma Avenue mural project. We’re excited to partner with someone so talented and familiar with the neighborhood.

People may remember the previous murals at this same location produced by another local artist, Reynaldo Hernandez. They were painted over about 15 years ago with grey paint.

The mural project is a stepping-stone to many other efforts dealing with tougher, longer-term problems. As a citizen leader in Polonia, Alvarez stated that her goal “is to build a safer community, stronger neighborhood and to instill the sense of pride that my neighborhood once had.” Certainly crime and overcoming the perception of decline is crucial for Polonia’s future. Zielinski’s efforts, such as expanding Operation Impact throughout the 14th District, can help neighborhoods like Polonia reclaim their streets.

Collaboration within the 14th District and beyond

Networks can be resilient and that’s what’s been missing in Polonia: a community network.

Last summer, Alderman Terry Witkowski took my mom and me on a tour of the innovative Garden District. That’s also how I became connected with Alvarez, who was already building a community network through her monthly community meetings, and efforts to improve pedestrian and traffic safety and combat crime.

Outside and neighboring organizations are also active in Polonia. Clarissa Morales with the Southside Organizing Committee runs the South of the Tracks: Polonia Neighbors group and organizes an annual neighborhood cleanup. Dan Bergen, executive director of the Office of Community Engagement at Marquette offered advice and openness to collaborate when possible. Morales’s Polonia cleanup was the perfect opportunity to do just that since it landed on Marquette’s Hunger Clean-up day.

Walking back to my parents’ house from the cleanup, I saw a yard sign that said, “No matter where you are from, we’re glad you’re our neighbor.” Polonia is an old neighborhood that has fallen on hard times but it has good soul and it’s a neighborhood worth fighting for.

When I asked my parents why they decided to stay, they started listing things like the location, that the neighborhood is walkable, and the superior craftsmanship of their classic Milwaukee bungalow. The discussion led to the biggest challenge facing Polonia and neighborhoods throughout Milwaukee: the problem of shell limited liability companies (LLCs) owning properties. Entrenched interests and profit — legal and otherwise — make for an intractable problem and a haven for crime. I hope in another year I will be able to discuss progress on this front.

Polonia’s future lies in data, which can serve as the key to decode problems and help people find solutions. With data, we can better interface with city departments and communicate needs to representatives, rather than through social media rage rants. The problem is that so much of this data is inaccessible and when it’s available, it might as well be hieroglyphics. Luckily, Milwaukee was selected through the Bloomberg Philanthropies What Cities Work Initiative to improve open data practices. 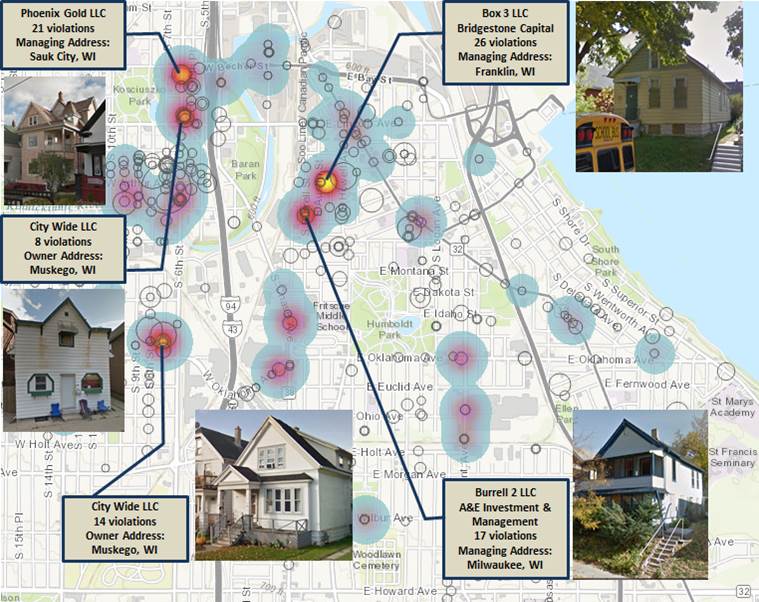 This effort can have profound implications for communities. For example, I wanted to know which properties in Polonia had property violations. I was advised to submit a freedom of information request to obtain this information. That would take a month or two – maybe never? Now I can go online, run a query, get the results, throw them in a map and boom — all the property violations in Polonia and the analysis that follows. I am excited for this initiative and the potential it offers for productive community engagement and participation in neighborhoods like Polonia.

The gray circles in this map represent every property violation logged by the Department of Neighborhood Services (DNS) in the 14th District. The size of the circle indicates the number of violations associated with a particular property. The colored ‘heat map’ represents the property violations associated with properties owned by LLCs. It appears that five LLC-owned properties disproportionately contribute to property violations in the 14th District. And of these, 80 percent are owned or managed by people or entities outside the City of Milwaukee. The LLC-owned properties on our block are the epicenter of crime, drugs and violence.

If we want to solve problems in our neighborhoods, data can be an ally for reform, equitable policies and enhanced, productive public engagement. If an old neighborhood like Polonia can reinvent itself, then there is hope for every neighborhood in Milwaukee.