You are here: Home / Home / Carousel / Award ceremony honors girls for projects that make a positive impact
Share this... 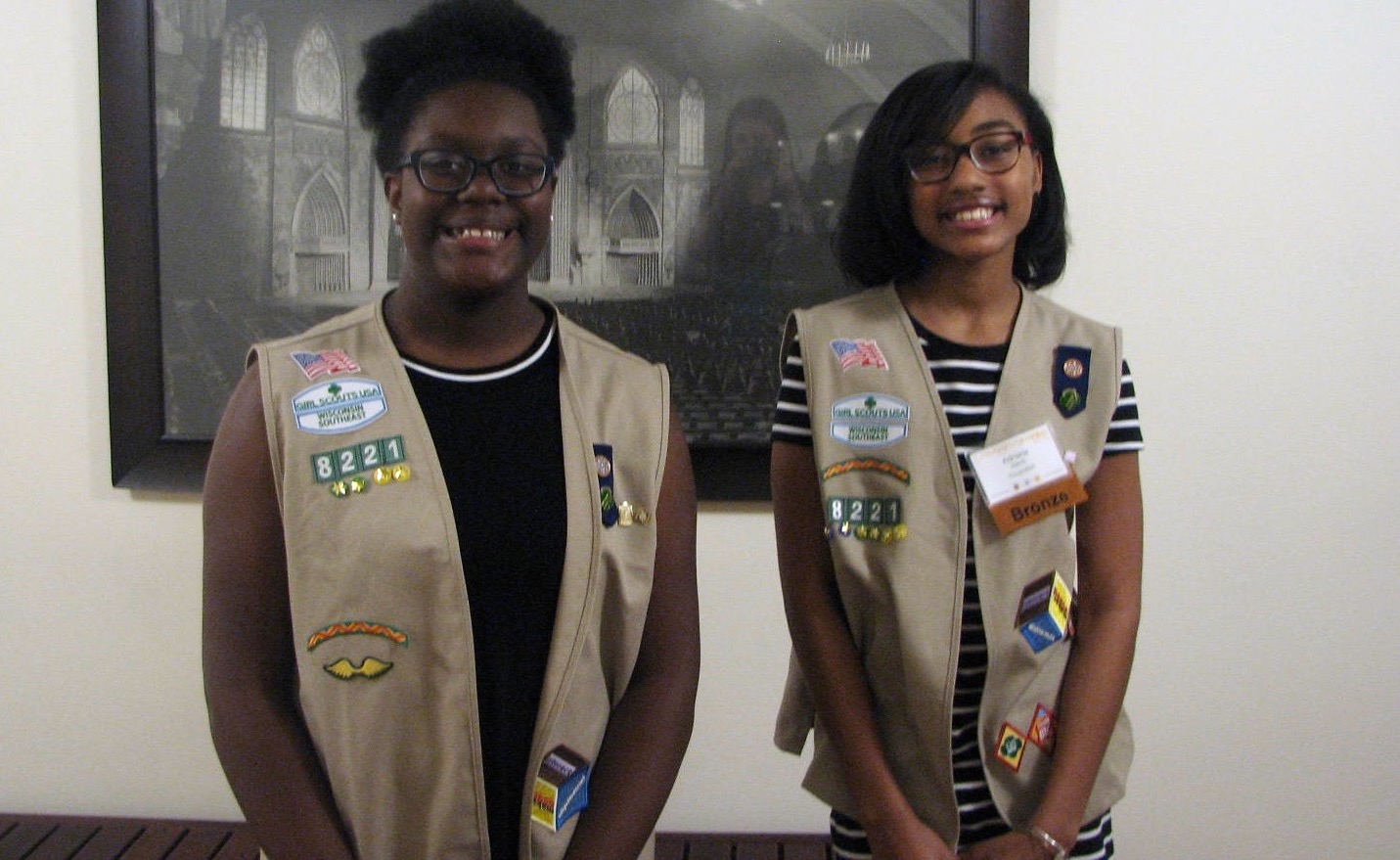 Alanna Bullock (left) and Adrianna Harris received an award for creating hygiene kits for people who are homeless. (Photo by Lydia Slattery)

Members of a local Girl Scout troop who spent months collecting deodorant, toothbrushes, toothpaste and other toiletries to create kits for people who are homeless were among the 700 scouts honored at a recent awards ceremony.

The girls in Troop 8221 created the kits by asking friends, neighbors and family members to donate items throughout spring and summer 2016. Last fall, they gave the finished kits to United Way of Greater Milwaukee & Waukesha County, which distributed them to people in need.

“I’m really close with my whole troop. We’ve been together for years,” said Adrianna, who lives on the North Side of Milwaukee.

Added Alanna, “I joined Girl Scouts because my mom wanted me to because it will look good for college and jobs, and I’ve also met some of my best friends here.” 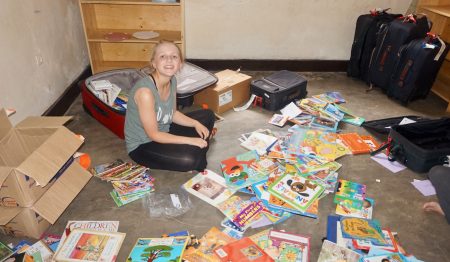 Frances Dobbs traveled to the Amahoro Children’s School in Rwanda to set up a library. (Photo courtesy of Girl Scouts of Wisconsin Southeast)

Alanna’s mother, Christy Brown, is the CEO of Girl Scouts of Wisconsin Southeast. The organization has more than 29,000 members from Kenosha, Milwaukee, Ozaukee, Racine, Walworth, Washington and Waukesha counties.

Girl Scouts of Wisconsin Southeast focuses on empowering its members, who each strive to be a G.I.R.L, “go-getter, innovator, risk-taker, leader.” They sometimes do crafts, but are also developing life skills and making a difference in the world, according to the organization’s website.

The members of Troop 8221 received a Bronze Award, given to girls in grades four and five. When the speaker called the troop’s name and announced its project, the girls stood up, smiling and waving as their parents took pictures. Alanna and Adrianna both wore tan vests decorated with patches showing the activities they completed.

The Girl Scouts Bronze Award honors girls for developing their leadership skills and making a positive impact in the community.

“I feel Girl Scouts and this project are teaching me to communicate with other people,” Adrianna said.

Frances Dobbs, 17, won a Gold Award at the ceremony for her project, called “The Things We Take for Granted.” She collected nearly 1,100 books and other school supplies to create a library for the Amahoro Children’s School in Rwanda. She chose the project, the largest in her 12 years as a scout, because her aunt began the school in 2013.

“I learned how to be a leader in my community. I had to educate people about Rwanda, the school and the project so they would donate supplies to the library,” said Dobbs, who lives on the South Side and has been a Girl Scout for 12 years.

The Gold Award is the highest honor a Girl Scout can receive. It’s only awarded to high school students, honoring them for outstanding accomplishments in leadership, planning and advocacy.

“The project was really meaningful to me because I saw a different world from Milwaukee, and I got to learn about a new culture. They have a harder time getting school supplies than we do in the U.S.,” Dobbs said.

She traveled to Rwanda to help set up the library after she collected suitcases full of books and supplies.

Brenda Vento, senior director of marketing and communication for Girl Scouts of Wisconsin Southeast, said that members often support the Girl Scouts throughout their lives. “They come back as donors, volunteers and ambassadors to the Girl Scout organizations. A lot of girls also go on to be camp counselors,” she said.

The organization celebrated its 100-year anniversary on May 19 at Clarke Street School,  the place where the first meeting was held a century ago. Gov. Scott Walker pronounced May 19 the official Girl Scouting in Southeastern Wisconsin Day.