You are here: Home / Posts from Community / Members of the Milwaukee Democratic Legislative Caucus send letter to Governor Scott Walker on Resignation of Sheriff David A. Clarke
Share this...

The undersigned members of the Wisconsin State Legislature’s Milwaukee Delegation again formally request that you remove David A. Clarke from the position of Milwaukee County Sheriff and that the elected representatives of Milwaukee County be involved in the selection of his replacement.

Milwaukee County residents deserve a sheriff that represents their values and needs. For too long, residents have had an absentee sheriff more concerned with promoting a national political agenda than doing the job that he was elected to do. In fact, an investigation, conducted by Fox 6 News in Milwaukee, has attempted to hold Sheriff Clarke accountable for his time in office. In the scarce documents released by the Milwaukee County Sheriff’s Department, we learned that during a 90-day period on the job, Sheriff Clarke failed to conduct any county business for 68 days. This is unacceptable.

Sheriff Clarke’s rhetoric and actions have given rise to historic public outcry concerning the federal 287(g) program, which would force his deputies to act as federal immigration agents and increase the use of racial profiling at a time when many of our community members fear and distrust law enforcement officials. His actions only serve to widen the divide in a community in a cheap effort to gain political favor.

Clarke has remained unapologetic concerning the horrific deaths under his watch, including Michael Madden, Terrill Thomas, Kristine Fiebrink, and the newborn baby of Shadé Swayzer and has failed to offer any meaningful solutions to address our community’s concerns. Clarke is also involved in a lawsuit after a pregnant woman was shackled before, during, and after childbirth despite her medical provider’s request for the shackles to be removed. This disregard for human life and suffering speaks volumes about the man who swore an oath to protect and defend.

Clarke also made national headlines when he sent a text that directed sheriff’s deputies to question a passenger on his flight who shook their head at Clarke. Afterward, Clarke threatened to “knock out” anyone who had the audacity to confront him in the future, leading to a public investigation and legal action against Milwaukee County. Over his time in office Clarke has cost our taxpayer’s hundreds of thousands of dollars in legal fees. With that number likely to increase, Milwaukee County residents are done footing the bill for his bizarre and unbecoming conduct.

In the most recent headlines, Sheriff Clarke’s longstanding disinterest in fulfilling the role of Milwaukee County Sheriff was confirmed when he announced that in June he would be leaving his current position to take an appointment with the Department of Homeland Security (DHS) in the Trump Administration. While DHS has still not confirmed the appointment, it is clear that Sheriff Clarke is not committed to serving our community.

Sheriff Clarke has willfully neglected his duties, promoted violence and division, used public resources to harass and intimidate citizens, and has left Milwaukee County residents liable for his actions. As the elected representatives of the people of Milwaukee County, we call on you exercise your authority under Wisconsin State Statute 17.09(5) and remove Sheriff Clarke as soon as possible.

In order to increase community trust in law enforcement and repair the integrity of the department, it is necessary for Milwaukee legislators to be involved in the selection of Sheriff Clarke’s replacement. Our constituents deserve a sheriff who represents the values of our county, is a distinguished law enforcement professional, and is committed to making our jails and communities safer. 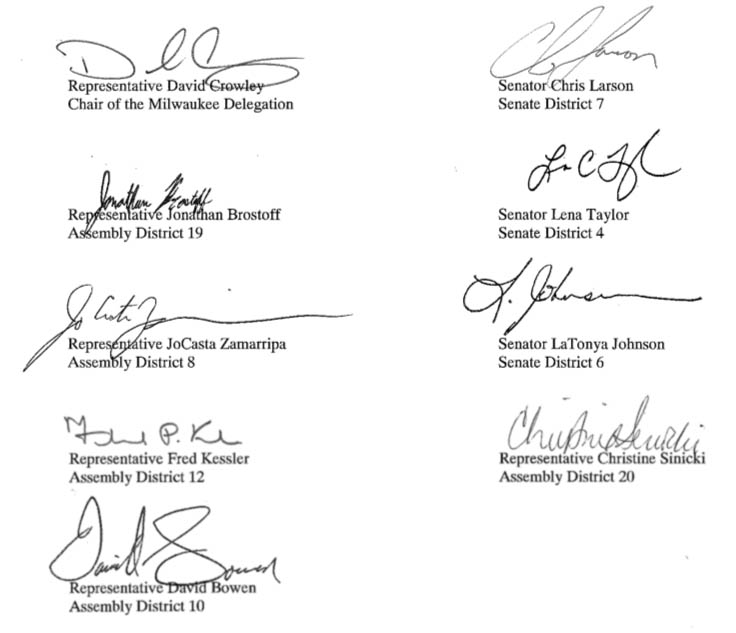