You are here: Home / Home / Carousel / New MPS department seeks to address achievement gaps for males of color
Share this... 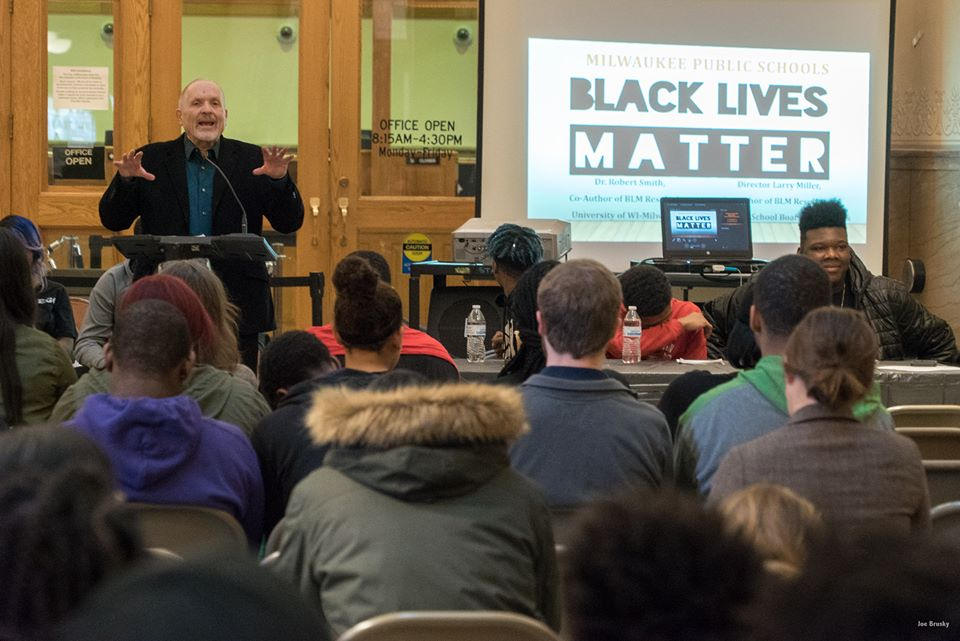 In an effort to address deep achievement gaps for young men of color in Milwaukee Public Schools, the school district recently created a department that will be specifically tasked with improving those outcomes.

The Department of Black and Latino Male Achievement, housed in the superintendent’s office, was created in May after an analysis of district data by MPS Superintendent Darienne Driver, according to Ashley Lee, special assistant to the Office of the Superintendent. Black and Latino males are more likely to be disciplined, and experience decreased attendance and academic achievement as they progress through the system, said Lee.

“I am not saying that we shouldn’t be focused on all students, or our young women, by any means,” Driver said. “But … the group that has the greatest need, consistently, across all categories are our black and Latino young men.”

“MPS has not consistently, nor effectively, engaged students of color,” said Equity Specialist Latish Reed, adding that the Department of Black and Latino Male Achievement (DBLMA) is about “putting the onus back on us, as educators.”

Lee said the department’s goal is to communicate high expectations for black and Latino students, and create safe spaces for them to explore manhood, identity, culture and history, as well as the status quo locally and nationally.

But specifics on how these initiatives will be implemented have been hard to come by in interviews with district officials. Teachers have raised concerns about a lack of student involvement in the planning process, and community partners listed on page 396 of the superintendent’s proposed 2017-18 budget said there have not yet been specific conversations about how they will be involved. Local Latino-focused organizations that officials said would be involved have yet to be contacted. 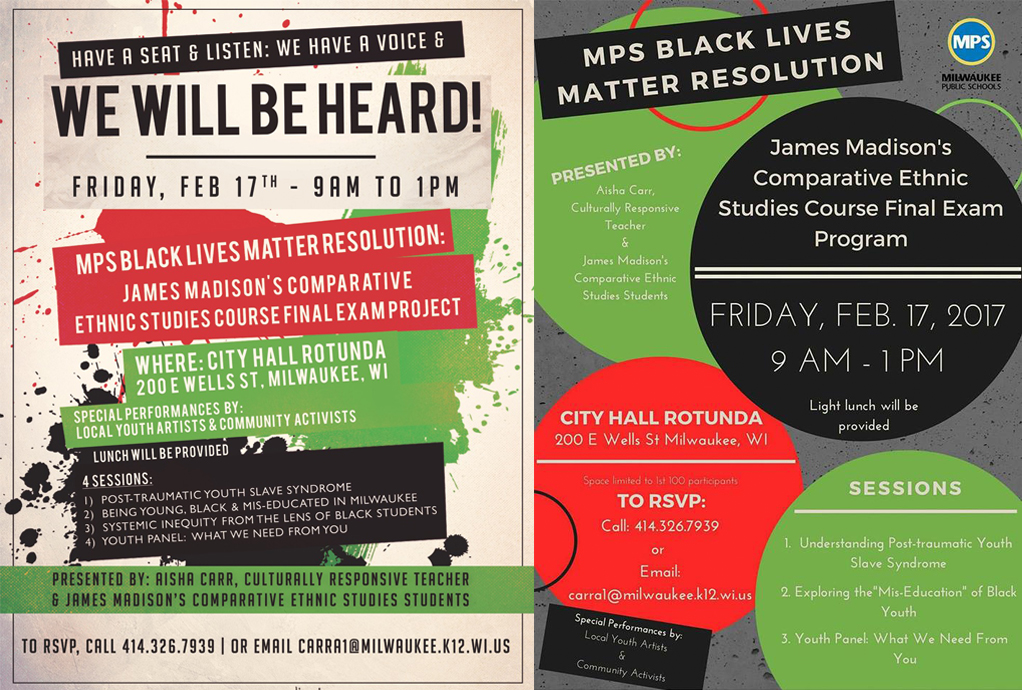 A student-designed poster was changed by MPS officials. (Courtesy of Aisha Carr)

More than 200 students participated in listening sessions at 11 MPS high schools between January and March, but these conversations were not directly related to the planning for the department, according to Edward Wingard, a Public Ally with MPS who conducted them.

David Castillo, a third-year teacher at Pulaski High School who took part in three planning meetings for the DBLMA, said no current students were involved in those sessions. Castillo said he and others who attended a meeting in early June that included “laying out the vision” for the department expressed concerns about this, which led to a discussion about including community partners.

Urban Underground, a nonprofit focused on developing youth leadership and activism, was mentioned at the June meeting, according to Castillo. Executive Director Sharlen Moore, who has not yet been contacted by the department, said students must have an active role in initiatives that involve them.

“Whenever we’re talking about engaging young people … they need to be the ones sitting at the table to help drive and implement initiatives,” said Moore, adding, “They need to be there from the start.”

Castillo added, “We need to own the inner oppressor that exists within ourselves.”

Castillo’s concern about what he said is a general lack of support for teachers and lack of accountability on the part of administrators was punctuated by an event that occurred in February. These issues, he said, contribute to a “chaotic” environment, instead of one that brings out the best in students.

“The system’s broken,” he said. “That’s really what it comes down to.”

In early 2015 the school board passed a Black Lives Matter Resolution, which — along with DBLMA — is part of the district’s efforts “around equity,” according to Driver. The resolution emphasized the importance of community and student involvement in determining curriculum in order to build trust and avoid repeating the institutional abuses people of color have endured in the past.

Eighty-seven percent of MPS students are black or brown.

“You have to get creative and make things relevant. Otherwise, the kids are disengaged; they’re not invested,” said Aisha Carr, who taught the comparative ethnic studies course at James Madison and conducted the teacher training.

Carr said district officials gave teachers a syllabus for the ethnic studies course that outlined the topics to be covered, but encouraged them to bring in their own books and “do things the way we wanted to.” So, Carr pursued out-of-school learning experiences, including a number of youth summits and a trip to Detroit to meet the author of “The Coldest Winter Ever,” a novel that “talks about a lot of real-life issues.” The students also read a UWM report on the 53206 ZIP code, watched “13th,” a recent documentary on race and incarceration, read excerpts from Michelle Alexander’s “The New Jim Crow” and talked about “taking the road less traveled,” according to Carr.

Andre Patterson, 19, was Carr’s student. Patterson, who is black, said he has always wanted to learn about his history but didn’t know classes such as Carr’s existed. He said it was interesting and fun “learning stuff that a regular teacher or regular class can’t teach you.” He said the group was “like a family.”

“Everything Ms. Carr taught us, she applied it to how we’re living on a day-to-day basis,” said Ha’Aciyanna Armour, 17, a rising senior at Madison. “She applied it to our personal lives, because she knows us on a personal level.”

Carr said many of the students had previously achieved below expectations, particularly in reading, but completed coursework in her class that exceeded expectations. Carr said, despite extending invitations to district officials, none ever visited her classroom. An MPS spokesman disputed this, but declined to provide details.

As the final exam, Carr and her students organized an event at City Hall on Feb. 17, which was attended by more than 200 people. Students presented on topics covered during the course, including racism, mass incarceration, post-traumatic slave syndrome and issues regarding their experiences in school, specifically not being listened to, according to Armour.

But Patterson and Armour said they were “censored” by district officials, including Reed, who changed the name of the event, scrapped a student-designed poster advertising it and determined that some of the content, particularly that regarding the students’ experiences within MPS, was not appropriate.

“We planned it, we organized it … and, then, when it came time to approve it … they were like, ‘Yeah, you can speak your mind, but you can’t say what you want to,’” said Armour.

Patterson said, “It just made me feel left out the conversation — like we came up with this and y’all [are] just taking it away from us.”

Reed said the materials were pulled because they weren’t approved by the Communications Department. The official poster reflects changes to the program, including removing a session on systemic inequity and tweaking another session’s wording about “mis-educating black youth” to make it less specific to Milwaukee.

“If we are in a situation where young people feel that they’re being censored or that they can’t express themselves, then, honestly, we have to rethink how we’re doing that,” Driver said.

Still, both students said the situation helped them find their voice. “I learned that … I can work to get whatever I need in life,” said Armour. “I can work to get heard, seen, recognized.”

A director and planning coordinator for the new department will be in place by the end of July, according to Driver. A planning assistant is slated to join the team after the first two positions are filled, some time in early September. MPS plans to begin implementing programs in August but Lee said planning for the department will be “a living process,” stretching over the next couple years.

Carr, who is no longer with the district following a disciplinary dispute revolving around the student event, questioned whether MPS is truly ready for students to learn to read critically, think for themselves and be educated about society’s ills. Castillo added that it is important to examine what students are being taught, and who is creating the curriculum.

Driver pledged to include students in planning for the DBLMA moving forward. “Our students will be a part of this, because this is something for them.” She also encouraged community groups and individuals to contact her office to find out how they can be involved.

“When you’re building an office from scratch, there’s going to be missteps,” said Driver. “At the end of the day, we have to change outcomes for black and Latino males — that’s what matters most to me. And, I think there’s enough collective will, energy and strategy in this community to get it done.”

About Jabril Faraj and Keith Schubert