You are here: Home / Posts from Community / Making the most of transit investments; city seeks resident input on neighborhood growth
Share this...

A new study in Milwaukee is asking the question, how can the Milwaukee Streetcar positively impact neighborhoods beyond the downtown area?  The answer will come, in part, from the residents who live in those neighborhoods.

Public engagement started this month during Bronzeville Week as ideas and concerns were shared by people who live near routes where the Streetcar system could expand.

With funding from the Federal Transportation Administration, City government is partnering with local firms and an internationally respected leader in transit oriented development planning, Skidmore, Owings, and Merrill.  The year-long effort will develop strategies and policies that maximize positive commercial and residential development while respecting and maintaining the character of affected neighborhoods. 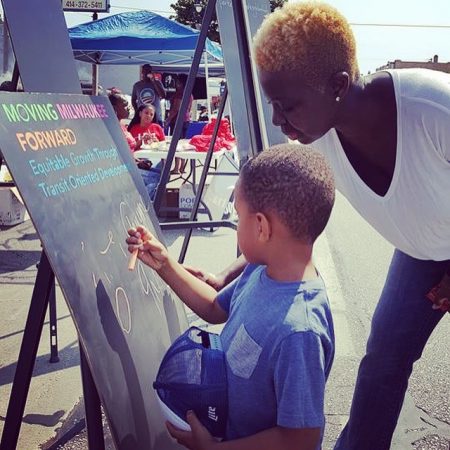 The Milwaukee Streetcar is now under construction with track installation work downtown.  The initial 2.5-mile route is likely to be extended in the future with connections both north along King Drive to Bronzeville and south to Walker’s Point.  This transit oriented development planning effort is focused on those two neighborhoods.

“Extending the streetcar improves transportation, but it’s more than that.  It will strengthen the business climate on King Drive, in Bronzeville, and help create jobs,” Deshea Agee, Executive Director of the Historic King Drive BID, said.  “We need a clear plan to make sure we are maximizing economic potential and preserving what’s great about our neighborhoods.”

Both the Historic King Drive BID and Harbor District Inc. were among the partners that helped secure federal funding for the transit oriented development planning grant.

In addition to the input from neighborhood residents and businesses, the planning efforts will incorporate in-depth market analysis to determine how best to attract economic activity and expanded housing options. Planners will also identify strategies to avoid displacement of existing residents and businesses by future development.

Recommendations could include modifications to the City’s zoning code, new policies to set appropriate density and intensity of development, consistent plans for streetscaping, signage, and infrastructure, or new financing strategies to promote investment.

Over the next year, planners will develop opportunities for significant public engagement.  Ideas and perspectives offered during that engagement will be incorporated in the strategies presented to policymakers.   A website has been launched with information about the study, movingmkeforward.com, where public comments can be shared.  The study team will soon finalize a date for initial public meetings to provide input on the project that will take place during September of 2017.

About City of Milwaukee Department of City Development