You are here: Home / Posts from Community / A morning with Community Advocates’ Homeless Outreach Nursing Center staff
Share this... 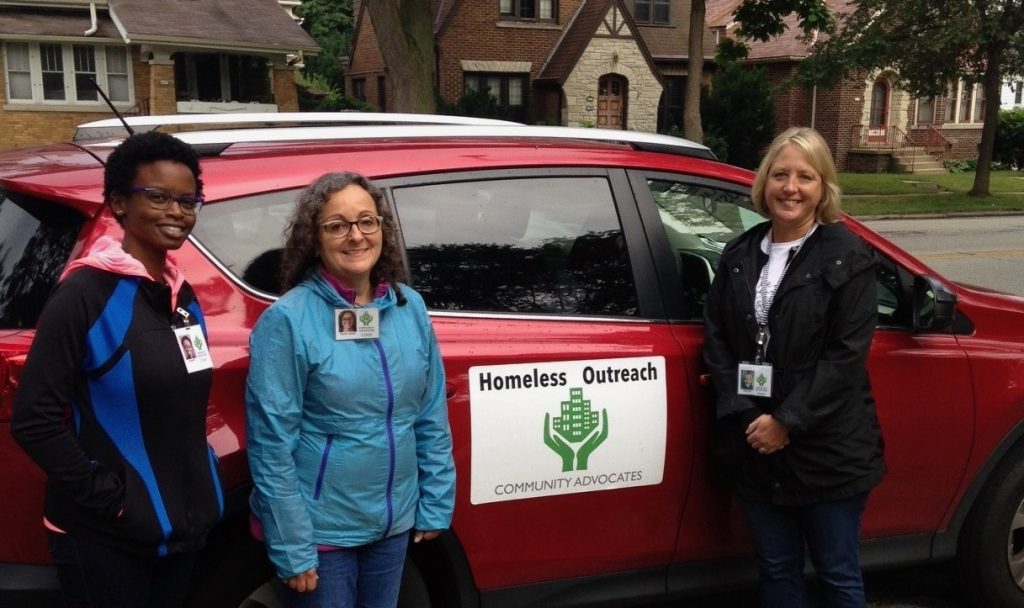 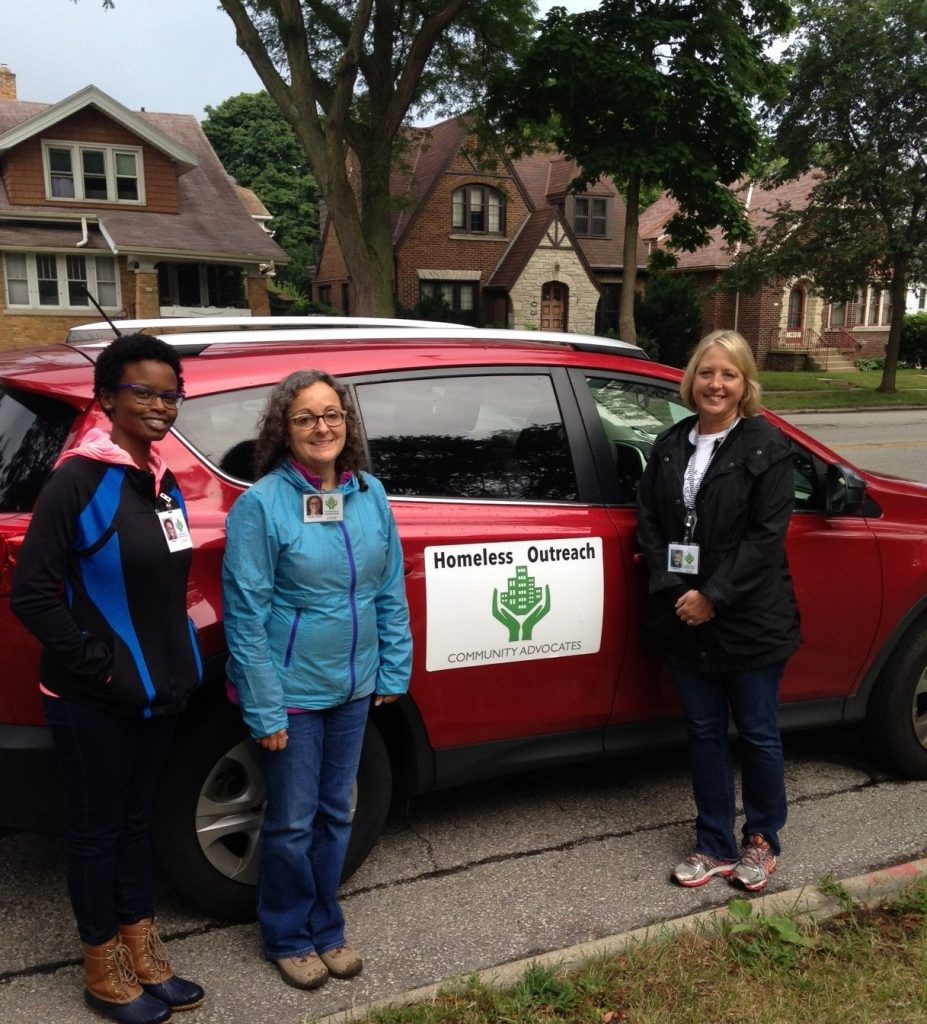 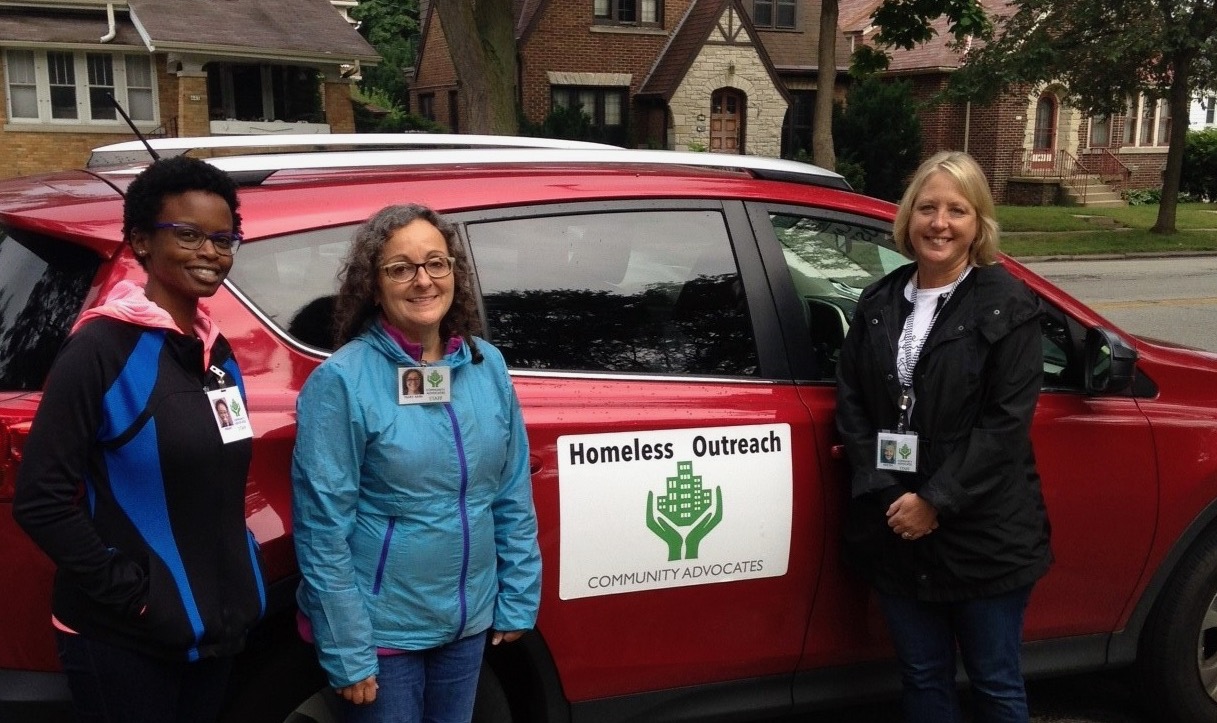 Bus shelters. The nooks and crannies behind a high-rise office. In abandoned buildings. On benches in secluded areas of county parks. Under a bridge. In a friend’s garage. In the upper reaches of a parking ramp. Roaming through empty streets as dawn hovers over downtown Milwaukee.

These are the locations Community Advocates’ Homeless Outreach Nursing Center (HONC) staff search out in the early hours of the morning twice a week when they offer assistance to Milwaukeeans living in uninhabitable areas.

The members of the Homeless Outreach Nursing Center—Program Manager Mary Ann Patti, plus Winnie Butler, Bindu Derksen, Dani Koehler, Miriam Manyara, and Kristin Syftestad—are unique among local street outreach teams in that all of them are clinicians—Kristin is a nurse—who are licensed to diagnose and treat mental illness. As they meet and work with individuals who live on the street, the HONC staff are constantly assessing and addressing their complex physical and mental health needs, as well as their living conditions.

At 5:30 a.m. on a recent Thursday in August, before the sun rose, HONC’s Mary Ann Patti and Dani Koehler set off from Autumn West, Community Advocates’ 20-unit Safe Haven for chronically homeless individuals who are transitioning into permanent housing. HONC’s minivan is loaded with a cooler full of sandwiches, snacks, and bottled water, as well as sleeping bags and a thermos of hot coffee. The food and supplies not only meet the immediate needs of individuals in dire straits, but they’re also a way to allow Mary Ann and Dani to initiate conversations and gather information during quick encounters. Besides doing street outreach, they’ll also arrange to meet with their contacts in meal sites and other safe, friendly locations to talk more in-depth about their wants, needs, and goals.

Mary Ann and Dani head downtown, where they look for a number of individuals they’ve met before and some who’ve been referred to them. Last year, HONC had made than 1,660 contacts with individuals, some of whom were engaged multiple times throughout the year.

Mary Ann and Dani pull up behind an office building on Wisconsin Avenue where two sisters typically spend the night, then hop out of the minivan and walk around the building, checking in doorways, behind the dumpster, and in the alley. There’s no sign of the women, so the pair continue through downtown and spot an older woman they know in a bus shelter on Sixth Street, her belongings in plastic bags filling the space. They circle back so they can talk to her. They approach, correctly identifying her as Beverly*. From their previous encounters, Mary Ann and Dani know Beverly lives with mental illness. But Beverly assures the women she’s fine and due for some money to come through. She accepts coffee and food, but no other assistance. Dani gives her a business card and arranges to meet with Beverly at another time, so that they can have a longer conversation about her health and living conditions.

Mary Ann and Dani head to a park on the near south side, where they’ve been told a man named John* sleeps in a secluded spot near a lagoon. As they drive through the park they spot another man at a picnic table—he’s a veteran who says he’s trying to get help through the VA and says has spent the night in an emergency shelter—before they find John, a bundled-up 20-something man who’s almost invisible from the park trail.

As rain starts to fall, Mary Ann and Dani approach him carefully. He’s startled when he wakes up, but Mary Ann talks to him quietly and listens to his story. John tells her has a diagnosed but untreated mental illness, survived being shot, and has lived on the streets for years. Mary Ann pulls out her iPad and is shocked to discover he’s not listed in ServicePoint, Wisconsin’s Homeless Management Information System, a statewide database of homeless individuals compiled by homeless outreach workers. That means John has slipped through the cracks of the system for years, a sign of how difficult it is to find and maintain contact with those who are transient and lack housing.

Mary Ann asks John a series of questions and makes observations about his current state; her questions are sourced from the standardized assessment tool VI-SPDAT, a vulnerability index. This information is critical to finding and prioritizing appropriate shelter for people like John if or when they want housing. Although individuals who are experiencing homelessness lack just about everything but the clothes on their back—sometimes even valid ID—they must document their time without housing as well as their physical and mental health needs in ServicePoint.

Not all housing is alike. There’s a continuum of care for those with specific needs and family relationships; the county’s coordinated entry system matches an individual’s needs to the appropriate housing option on the continuum. For example, Autumn West, classified as a “Safe Haven,” serves chronically homeless individuals—defined by Housing and Urban Development (HUD) as people who have a disabling condition (such as a serious mental illness, substance use disorder, or physical disability), and have been continually without a home for a year or more or have experienced homelessness at least four times in the past three years. Besides Safe Havens, there are also emergency shelters that serve specific types of individuals or families (such as Community Advocates’ Milwaukee Women’s Center), as well as more long-term or permanent housing secured through Community Advocates’ Project Bridge program, for example, or Milwaukee County’s Housing First initiative.

After meeting with John, Mary Ann and Dani drive across town to meet Isabelle* at a specific bus shelter at an agreed-upon time. Meeting Isabelle is the morning’s bright spot. In her late 20s, she’s been homeless and barely getting by after aging out of foster care. But finally, on this morning, she’s going to move into Autumn West, where she’ll have a small studio apartment to herself and receive the support she needs so she can get stable and eventually live independently. She’s thrilled about this opportunity and is full of questions. Mary Ann and Dani drop her off at Autumn West, introduce her to a case manager, and congratulate her on her new home. They wave goodbye as Isabelle hops into the elevator with her belongings, eager to start her new life.

Mary Ann and Dani drive away in search of the rest of the individuals on their list—under a bridge, in a garage, in the backyard of an empty house, on the steps of an office building—and head back to Autumn West at 9 a.m., when most Milwaukeeans are starting their work day, oblivious to the needs of the thousands of individuals who’ve just survived another long night on the streets.

*All names of individuals who are experiencing homelessness have been changed to protect their identity.

If you or someone you know is experiencing homelessness or is at risk of becoming homeless, contact Impact 2-1-1.