You are here: Home / Home / Carousel / Nonprofit provides inmates kitchen skills, opportunity to give back
Share this... 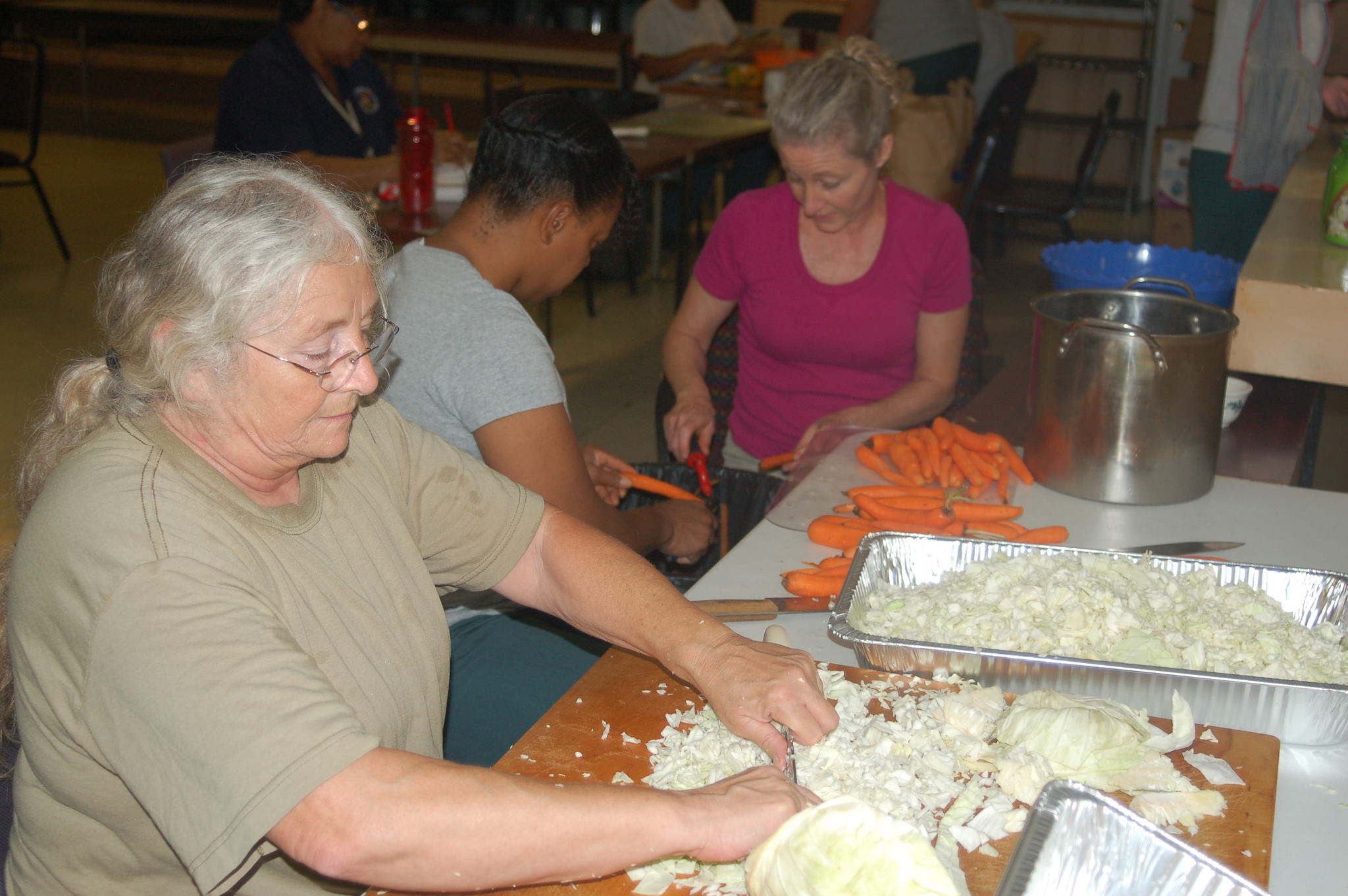 The Solomon Community Temple kitchen was buzzing with activity and fragrant with the aroma of eggplant sizzling in a skillet. A woman in a green prison uniform stood at the commercial range browning vegetables. Another woman, similarly attired, scraped pureed sweet potatoes from a blender into a mixing bowl. Several volunteers chatted as they chopped cabbage and other inmates peeled carrots and cut peppers in an adjoining room.

The women — volunteers and inmates — are participants in a food justice initiative of the Jewish community nonprofit Tikkun Ha-Ir (THI). The inmates, incarcerated at the minimum security Milwaukee Women’s Correctional Center (MWCC), 615 N. Keefe Ave., are permitted to perform community service, and in some cases work at paid jobs, with varying degrees of supervision.  MWCC transports them to and from work sites.

Called the “Chop Shop,” the program takes place at Solomon Community Temple, United Methodist Church a few blocks from the MWCC. There participants clean and package surplus produce collected from farmers markets into user-friendly portions, which volunteers distribute to meal programs, shelters and food pantries throughout the metropolitan area. The project eliminates waste, makes nutritious food available to people in need and gives inmates kitchen skills training and an opportunity to contribute to society.

Iyanna Porter, 40, participates in the Chop Shop, she said, to give back to the community. Porter said she likes to cook and is learning to use new ingredients. “The camaraderie … and the support that you get from the people here is really nice,” she said.

Inmate Alysha Gagermeier, 24, came to the Chop Shop for the first time on a recent Monday. “It’s nice to get a breath of fresh air and come out in the community and help people,” she said. “I want to show people there’s more to me than my drug addiction.” 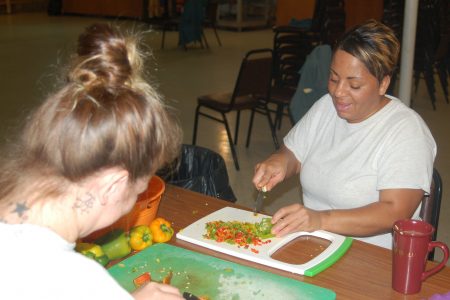 MWCC inmate Jayne Buckley chops peppers that will be packaged raw or put into prepared dishes. (Photo by Andrea Waxman)

The Chop Shop evolved out of THI’s Surplus Harvest program, which was sparked by board member Reenie Kavalar’s search for recipients for her own garden’s surplus.

Both programs run annually from July into October. This season, THI volunteers are collecting unsold produce four days a week from five farmers markets including Fondy Farmers Market, the largest donor. They deliver the vegetables to 11 organizations, including the Jewish Community Pantry, 2900 W. Center St., and the Chop Shop.

The farmers at Fondy, the majority of whom are Hmong, “have really big hearts and are extremely hard working and … have little wealth,” said Jim Hagen, a THI volunteer who has picked up unsold produce there for five summers. “It’s part of their culture” to donate food to people in need. “It (seems) like a spiritual thing for them,” Hagen added.

As of mid-September, THI estimates it had collected 10,000 pounds of produce this season and the Chop Shop had processed 4,200 pounds into 26,188 servings of healthy food.

Initially, the Chop Shop simply brought volunteers together to clean, chop and bag fruits and vegetables so that organizations offering shelter, meals or groceries could use the produce more easily.

But last year Karen Royster, THI’s project and development manager, arranged to add the “Cell to Chef” project. This expanded the program to include women from MWCC and added an option for inmates to take classes at Milwaukee Area Technical College and earn a Certificate of Culinary Competence. Equal to the first semester of MATC’s culinary program, this certification qualifies recipients for entry-level restaurant jobs, Royster said. Eight of the 10 women who entered the certificate program graduated, she said.

A leadership change at MWCC caused the MATC certificate option to be delayed this year. It is also unclear whether the state funding for MATC obtained last year will be available again, Royster said. But she hopes the new center superintendent, who is expected to assume the position next week, will continue this opportunity for inmates.

“Working at the Chop Shop humbles me,” said inmate Jayne Buckley, 37. “It makes me realize I can do more. I can give back. It gives me a good feeling …. making a right of the wrong.”

Buckley and inmate Kathy Wolfe, 59, both said they would like to continue to volunteer when they return to their homes in Green Bay and Wausaukee, respectively.

“I love doing this,” said Wolfe, who had never cooked before working with the Chop Shop. “I would like to do this in my own town but I don’t know if I can because it’s a small town,” she said.

Tikkun Ha-Ir, which is Hebrew for “repair the city,” encourages Jewish community members to build a more just Milwaukee through study, action and civic engagement, according to Sami Stein Avner, executive director. In addition to its food justice programs, THI sponsors a book club and speaker series about the pressing needs of city residents. It also collects supplies for homeless shelters and provides holiday meals and gifts.

Volunteers and inmates all gain from these programs, participants said. For Kavalar, whose parents survived the Holocaust, preventing waste and assuring that people have nutritious food are important. In addition, she has met “really nice people, women of all ages, who are willing to learn and help.”

Weinshel added that “better health through food has always been my thing,” noting that the work has helped her see the complexity of people and social problems.

“It takes time and patience and effort to fix a lot of the problems,” she said. Paraphrasing from the Jewish text “Ethics of the Fathers,” Weinshel added, “Though we will never finish the work; neither are we permitted to stop trying.”