You are here: Home / Community Voices / Setting the tone for social justice
Share this... 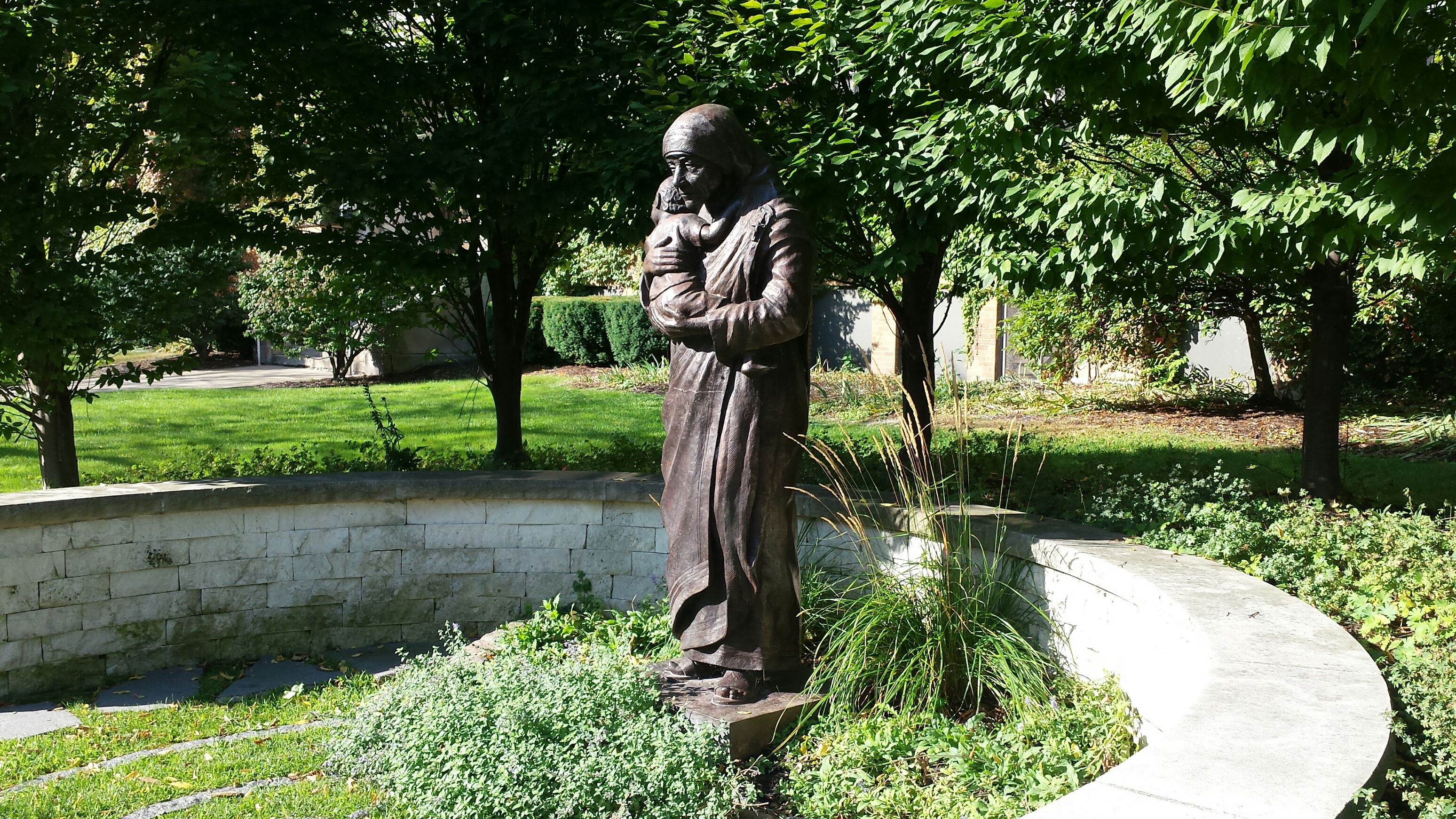 Statue of Mother Teresa on the Marquette University campus. (Photo by Margaret Rozga)

Margaret Rozga, poet, civil rights activist and professor emerita of English at UW-Waukesha, reflects on the role of public art in the battle for social justice.

I waited in the shade of the garden between the Joan of Arc Chapel and the statue of Mother Teresa on the Marquette campus. Grateful for the relief there from the day’s overbearing heat and for the Sunday quiet, I gathered my thoughts for a presentation to those I was to meet here, those on a civil rights and public art tour, one of the 2017 Doors Open Milwaukee events. I thought about how to frame my brief account of Milwaukee’s open housing marches across the James E. Groppi Unity Bridge in a way that acknowledged the person represented in the statue of this saint, rendered here as a stoop-shouldered elderly woman holding a small child.

Fair housing was an issue in Milwaukee in the 1960s because the African-American community in Milwaukee had almost tripled in size between 1950 and 1960, from 21,000 to 62,000 and then grew again by 50 percent by 1967. But the housing available to African- Americans did not correspondingly grow. In 1967, African-Americans were 12 percent of Milwaukee’s population, living on 5 percent of Milwaukee’s land with a population density four times greater than elsewhere in the city. The recalcitrant Common Council, following what today we might call “a self-deport strategy,” refused to acknowledge the critical housing needs of African-Americans residents, apparently hoping that would push them from the city.

For this tour, at this site, at this time, I decided to fit those facts into the current debate about the role and the importance of public art. I also decided to talk about the multiple strategies for social justice represented by my presence there, close to the James E. Groppi Unity Bridge, and immediately in front of the statue of Mother Teresa.

Public art sets a tone for the community. Bronze statues, sometimes larger than life, are designed to speak to long-term community values. Unlike Charlottesville, Virginia, and other sites of Confederate monuments, Milwaukee has a remarkable number of statues and other public art that sets a compassionate, caring and social justice-minded tone. Yet this art —considered as isolated separate pieces — is perhaps too easy to overlook.

The Doors Open Milwaukee tour served the valuable function of threading together this public art in a common theme. The statue of Gandhi in MacArthur Square, also included on this tour, serves to remind us that non-violence can be powerful enough to overthrow a colonial power. The statue of Mother Teresa represents direct social service to the poor and outcast, a strategy important in meeting immediate needs.

Standing in front of that statue, I outlined another set of strategies: legislative, electoral and direct action, all of which were essential components in the struggle for fair housing. Alder Vel Phillips employed the legislative strategy as she introduced a fair housing bill in the Common Council. Father Groppi and the NAACP Youth Council implemented a direct action strategy in the marches that brought to the fore a festering issue so that it would be addressed. Numerous people, most of whose names we’ll never know, took an electoral route; they decided they did not want a representative who voted against fair housing, recruited new candidates and supported them so that when the fair housing bill passed on April 30, 1968, there were new members of that Common Council who had no history of voting against fair housing. I read a poem about these marches, and invited everyone to join in saying the repeated line: “People on the march.”