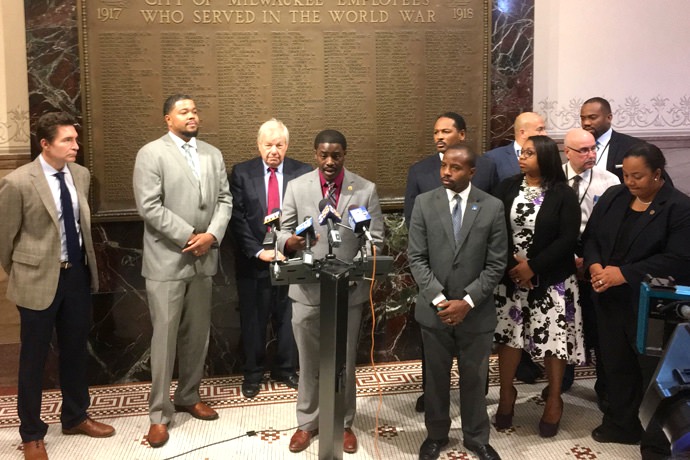 Community leaders welcome the idea of installing automated technology throughout the city to help ticket reckless drivers, after a state lawmaker introduced legislation Tuesday to temporarily allow the practice.

State Rep. David Crowley announced his new measure, the Safe Roads Save Lives Act, at City Hall with 11 members of the Common Council appearing alongside him.

Police departments in Wisconsin are prohibited from using automated technology, such as cameras, to enforce traffic signals and speed limits. Crowley’s measure would allow the technology during a five-year pilot program in Milwaukee, where reckless driving has become a near-constant source of complaints from residents and city officials alike.

“It’s about time and it’s well needed,” said Steve O’Connell, a member of the Sherman Park Neighborhood Association who has organized several demonstrations against reckless drivers.

O’Connell said he and other residents have pushed for automated technology for years but couldn’t build enough momentum to have someone challenge state law. 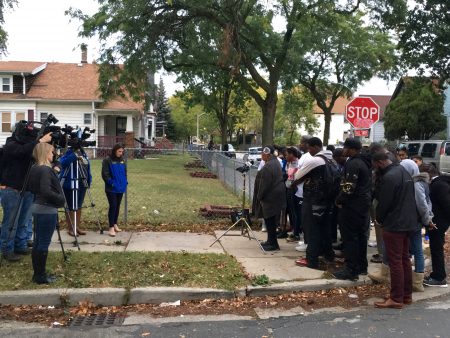 A group of about 40 community members bow their heads in prayer before beginning a news conference on Oct. 11 in the wake of the death of a 16-year-old boy from a reckless driving incident. (Photo by Elliot Hughes)

Crowley referenced a study by the Insurance Institute for Highway Safety that says communities with red light cameras had 21 percent fewer red light-running accidents and 14 percent fewer crashes of all kinds at signalized intersections. He said he is circulating the measure among other lawmakers for co-sponsorship.

But O’Connell and others still have some hesitation about the proposal.

When it comes to speeders, Crowley’s measure would only ticket those traveling at least 20 miles above the speed limit. O’Connell said that gives drivers “quite a bit of leeway.”

He gave Capitol Drive as an example. With a speed limit of 35 miles per hour, cars could drive up to 55 without worrying about the cameras.

Ian Bautista, executive director of the Clarke Square Neighborhood Initiative, also supports the legislation. He said his organization’s outreach efforts have shown that traffic safety is a top-three issue among Clarke Square residents. But he said he would be wary about how the technology is distributed throughout the city.

“I just want to make sure it’s evenly applied so that it’s not targeting certain communities over others,” Bautista said.

Crowley’s proposal also has the support of MPD, which on Monday announced plans to beef up traffic enforcement for the remainder of 2017 by concentrating more resources on 50 locations where high rates of crime and crashes occur. MPD Lt. Derrick Harris said at the news conference that the department supports legislation that would reduce reckless driving.

“It’s important that we give our police department the tools that they need to combat this growing epidemic of reckless driving,” added Crowley.

Two other community leaders, activist Andre Lee Ellis and Running Rebels Executive Director Victor Barnett, both said they support the proposed legislation, but emphasized the importance of educating the public and convincing community members to hold each other accountable.

“I see it as one of the many efforts that need to occur,” Barnett said.

Ellis organized a gathering at the corner of 12th Street and Concordia Avenue last week in response to the death of Joseph N. Blunt, 16, who was thrown from the hood of a moving vehicle at the intersection a day earlier, to ask the public to drive with care and hold each other accountable.

He said the technology would “keep the subject at the forefront of conversation, get the message out there that we have to stop and live.”