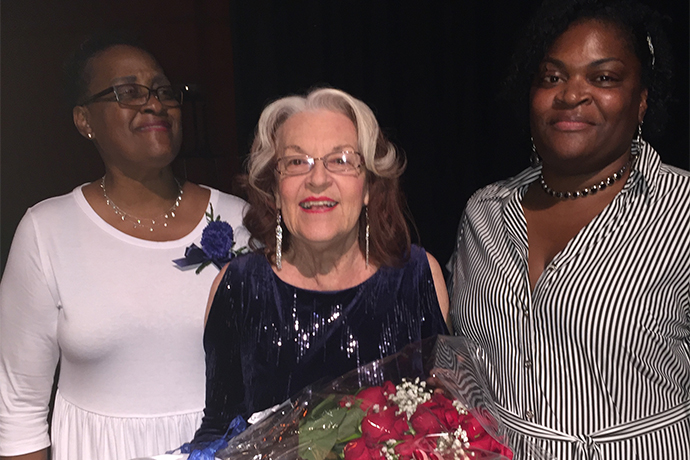 Arlene Skwierawski (center) is flanked by admirers Denise Wooten (left) and Stacie Brown at a recent tribute to her at North Division. (Photo courtesy of Denise Wooten)

For approximately 2.5 hours, all thoughts of Trump, North Korea, or the Russian investigation were silenced. “Noble Glorius,” a tribute to two former teachers from North Division High School, took center stage, literally. On Nov. 4, Sarah Grant–Rowe and Arlene Skwierawski were honored for their years of educational excellence and personal inspiration. This was the brainchild of Beverly Williamson-Dedmon, a 1974 alumna, and others. The tribute included performances by students who had attended this Milwaukee Public School under their tutelage during the past five decades. There were other ardent fans who stepped into the building for the very first time, each coming to pay homage to these very special women.

The audience was filled with dignitaries as well as second– and third–generation descendants of the many singers, dancers, drummers and speakers who presented honorariums and proclamations. Mayor Tom Barrett and U.S. Rep. Gwen Moore, a 1969 NDHS graduate herself, offered their congratulations. Some came in wheelchairs, walkers or on canes, but it was clear that all entering carried huge bouquets of love and appreciation.

The atmosphere was one that is normally experienced in church aisles or cathedral pews. Throughout each act many took to their feet and danced or shouted above the nonstop applause. An occasional “Hallelujah” or “Blue Devils” (the school’s mascot) rang throughout the auditorium. Attendees could not contain themselves as the emotion swelled to a feverish pitch. Past photos of the 80-year–old honorees were projected as the screen backdrop incited hoots and cheers each time the film moved forward.

Grant-Rowe, who currently resides in New York and was unable to be present due to health issues, was represented by family members who had flown in that morning. They approached the microphone with visible elation to thank those who had been a part of the planning committee as well as the audience who greeted them warmly by throwing kisses at a photo of Grant-Rowe in African garb. Grant-Rowe was not only the school’s much beloved physical education teacher, she was the founder and instructor of the highly respected Nefertari Dance Group at NDHS. An exhilarating presentation by veteran dancers and the drummers who accompanied them set the tone for the rest of the evening.

Skwierawski, who everyone calls Arlene, turned 80 last month. She sat in the front row beaming at her former students, representing the MPS Alumni Choir, All Saints Choir and the Amazing Grace Choir. The latter groups are community singers she has directed before and since retiring as the NDHS lead music instructor. She too is undergoing the effects of aging but that did not keep her from rising from her seat to conduct the audience in singing Handel’s “Hallelujah Chorus.” When she was escorted to the stage as the Mass Choir prepared the finale, “God Is” — which we know is her favorite gospel hymn — there was not a dry eye in the crowd.

Never speaking a word, Arlene’s protégés welcomed her in the manner befitting a super star. Her smiling adoration garnered hugs and kisses that were mixed with photo ops, flowers and unrestrained tears. That said it all. It is a safe bet that the memories from that night will remain with us always. Those 2.5 hours brought back the music, friendship and love Sarah and Arlene gave unconditionally.

A videotape of the whole affair is forthcoming and will be made available for purchase. Proceeds will be used for a college scholarship being awarded to a North Division senior.