You are here: Home / Community Voices / City’s fair and affordable housing crisis in the spotlight
Share this... 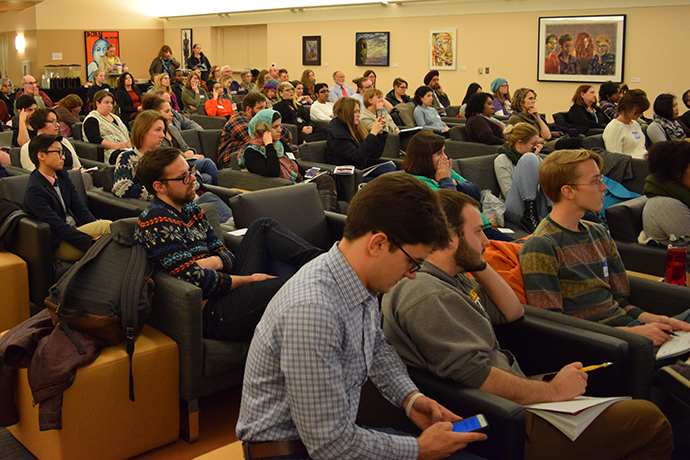 Margaret Rozga, poet, civil rights activist and professor emerita of English at UW-Waukesha, finds hope in the progress that successful housing programs have achieved, especially in terms of finding paths to housing stability and affordability.

Since Milwaukee’s 200 nights of marching for fair housing in 1967-68 and passage of national and local fair housing legislation in April 1968, we’ve had, in the words of Fred Freiberg, 50 years of “all deliberate lethargy.” Freiberg, co-founder of the Metropolitan Milwaukee Fair Housing Council in 1977, was keynote speaker at the group’s 40th anniversary celebration on Nov. 16.

The spotlight was on Milwaukee’s long-neglected fair and affordable housing crisis that Thursday, coincidentally the birthday of Father James E. Groppi whose name is synonymous with Milwaukee’s fair housing marches. Content-rich public events at different venues under different sponsorship began at 7:30 a.m. with “Milwaukee Housing: Crisis and Opportunities,” a program co-sponsored by the Milwaukee Global Shapers Community, ACTS Housing and the Fair Housing Council. In the afternoon, the UWM Urban Studies program offered its 11th annual State of Milwaukee Summit, this year focused on housing under the title “Far From The American Dream: Milwaukee’s Fair and Affordable Housing Crisis.” That evening the Metropolitan Milwaukee Fair Housing Council celebrated its 40th anniversary.

Kavon Cortez-Jones, one of Milwaukee’s dynamic young poets, capped off the Metropolitan Milwaukee Fair Housing Council event and the day with an audience-energizing spoken word performance. He rapped the history of Milwaukee’s 1967-68 open housing marches in a way that made their spirit palpable. He kept the story fresh and relevant, weaving in present-day details of his own experiences along the 16th Street route of the most famous of these 200 nights of marching. He never missed a beat, though moving at a rapid-fire pace. If only we could keep up this pace in working toward solutions to the issues of fair and affordable housing in our community.

Present at two of these events, I am convinced this day’s housing focus offered a promising start. Among the hopeful signs is the fact that all three of the day’s housing events had attendance at the capacity of the venues where they were held. Also hopeful is the progress that successful programs have achieved, especially in terms of finding paths to housing stability and affordability. We know what works. We need the will to build upon what we know.

Rebecca Stoner, director of development at ACTS Housing, was a panelist at both the morning and afternoon programs. She reported that in Milwaukee one-third of renters pay 50 percent or more of their income for rent. When they become homeowners through ACTS Housing, these cost-burdened families find their housing costs significantly reduced.

Need is still great for persons facing housing eviction, as Raphael Ramos of Legal Action of Wisconsin’s Eviction Defense Project said. With some people paying more than half of their household income for rent, the likelihood of failure to pay rent on time increases and thus so do evictions. Less than 1 percent of tenants facing eviction, 112 out of 13,476 cases, had legal representation. The new Milwaukee County budget provides for a small increase in legal help for people in such cases.

Southeastern Wisconsin remains a hyper-segregated area both economically and racially, as Kori Schneider-Peragine, senior administrator of the Housing Inclusivity Program at the MMFHC, explained at two of the day’s housing forums. Most job growth in the area is in Waukesha County. The highest unemployment is in Milwaukee. This spatial mismatch could be resolved either through improved public transportation or through increased housing integration.

Both remedies have stalled. Low-income housing choice vouchers could provide for “movement to opportunity,” but currently only one in four people who meet the qualifications for a housing voucher have one; the housing voucher program is significantly under-funded.

Fifty years after the passage of national and local fair housing laws, these discussions offer hope that we may be ready to move beyond lethargy into problem-solving mode. Eviction defense, home ownership, increased funding for housing choice vouchers and protection for voucher holders from discrimination are all worthy steps for which we’ve already waited too long.