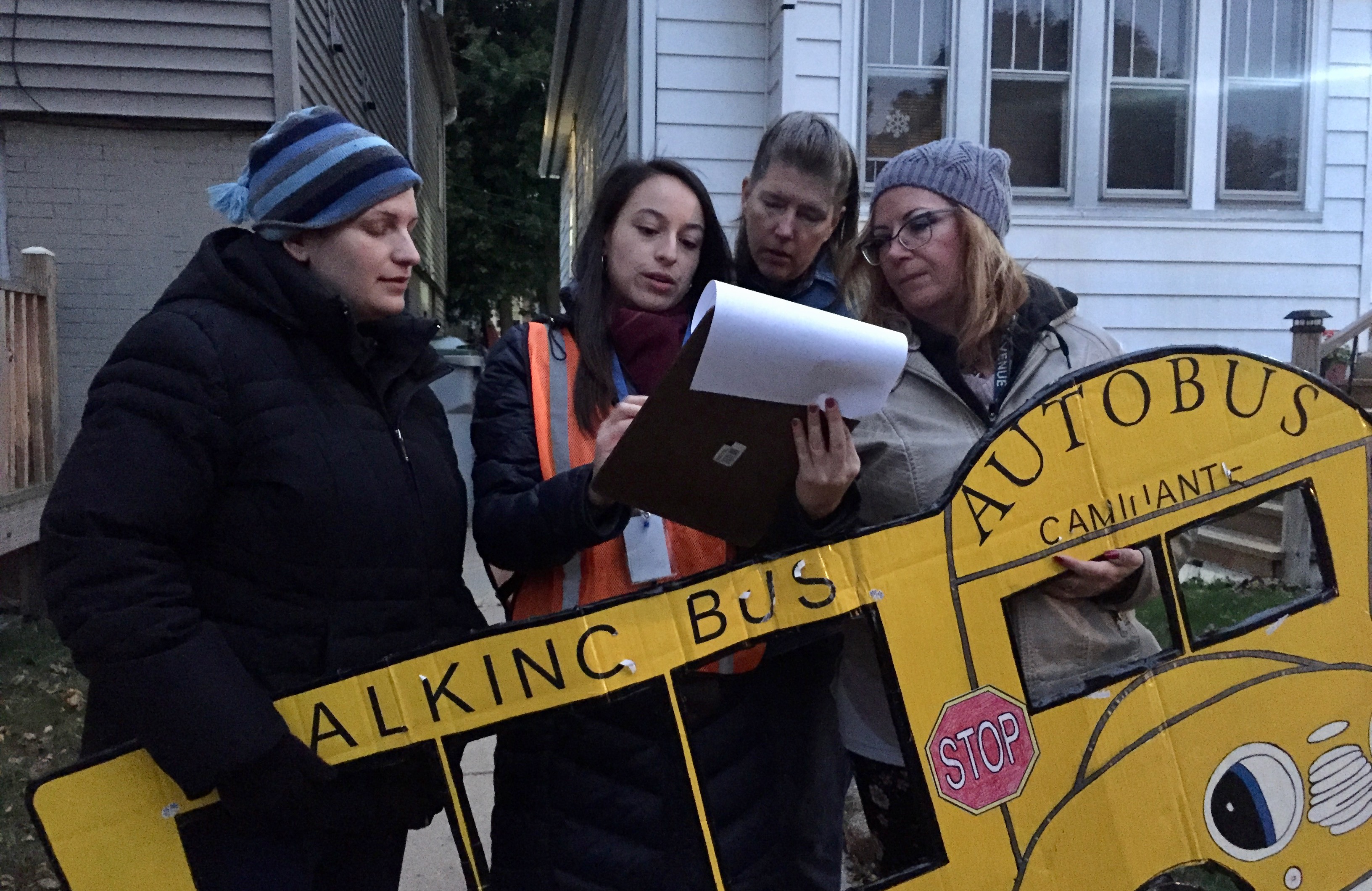 It’s dark in Lincoln Village at 6:30 in the morning, but the Lincoln Avenue School Walking School Bus lights up the sidewalk.

Adult volunteers wear bright, reflective vests and carry a big yellow sign that says, “Walking Bus.” As children continue to join the sidewalk parade, neighbors smile and say hello. Laughter breaks through the quiet chirping of birds and the distant rumble of cars. Lincoln’s crossing guard helps the kids cross the street safely as they walk beneath the arch guarding the courtyard.

Angel Garcia Prado, 5, walks the route with his mother, Janeth Prado. She has volunteered with the bus since its beginning last year. He said he likes to hang out with his friend Jonathan Alvarado, 10, while walking to school. The hot chocolate at the end of the route also helps to warm up from the cold outside.

“It’s fun,” Jonathan said. “It motivates me. I like to go to school more.”

Prado is part of the walking school bus leadership team at Lincoln Avenue School, 1817 W. Lincoln Ave. in Lincoln Village. She said it’s helped her son and his friends to have more interest in school and learning, and she’s glad it’s helping other parents and their children. Even when it’s cold outside, the route doesn’t stop. “Once it got cold and snowy, we kept walking,” Prado said. “It will continue to motivate students.”

The other leader of the group is Regina Stieber, the community school coordinator at Sixteenth Street Community Health Center, a Lincoln partner. Stieber said she plans to expand the program in November by adding eight more kids to the route. All children on the route are handpicked by school staff, including social workers, because of spotty attendance. As the year continues, the school will continue to monitor attendance patterns and invite families that would benefit to join the program. 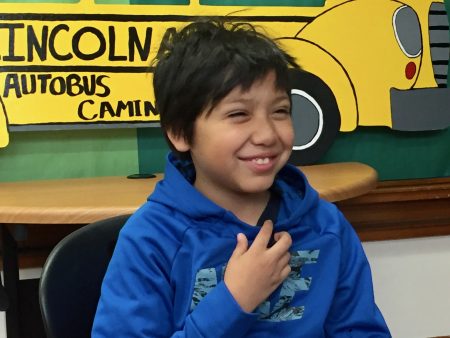 Jonathan Alvarado, 10, said he likes to walk along the route because it’s fun and it motivates him. (Photo by Grace Connatser)

“There are new staff members willing to volunteer, even getting their sons and daughters involved,” Stieber said. “I think people are really inspired by the walking school bus and they love the kids that go here. … The teachers here care so much that they’re willing to give up a morning to walk the kids to school.”

Mondays were very recently added to the route, which used to run only on Fridays. The school administration is also considering a second route that would run simultaneously with the existing route. The current route only runs south of the school with a maximum distance of two city blocks.

The purpose of the program is to increase attendance at Lincoln, a school that has suffered from significant rates of student absenteeism. The route picks up 13 students at their front door Mondays and Fridays, no matter the weather. The route spans 18th, 19th and Grant streets. Stieber has been running the program since August after the previous coordinator stepped down.

Principal Yaribel Rodriguez, who has been at the school for four years, said the days with the highest rates of absences are Mondays, followed by Fridays. Many of those absences are repeated by the same children, resulting in a 12 percent rate of absenteeism for Lincoln students, Rodriguez added. She said the students who have been going to school more often due to the route have been submitting more classwork, leading not just to higher attendance, but also to higher grades.

“Attendance is important (because) if students aren’t in the classroom, they’re not learning,” Rodriguez said. “We need to get them in our building consistently for the classroom instruction that they need.”

Stieber also said parents are big fans of the program because many have said they feel unsafe walking their child to school in the morning in the dark. She said neighbors and others on the street honk and wave as the walking school bus passes by on the sidewalk. “I felt like it was an opportunity to expand the scope of family engagement and the impact on the community,” Stieber said.

Rodriguez said attendance rates have improved significantly since the program started last year. The current daily average at Lincoln is now at 91 percent, but she isn’t stopping there. She hopes to bring it up to 95 percent soon. She said one student has proven to be an example of the impact the walking school bus has had on Lincoln.

“One boy that was on the walking school bus was very detached from the school community … coming to school about 50 percent of the time,” Rodriguez said. “Now, his attendance is closer to 80 percent. We also see him socializing more, we see him smiling more. We see him engage with the adults in the building, so it’s helped him succeed.”

Ryan Hurley, the Milwaukee Community Schools Partnership director at United Way, said other schools in the Milwaukee Public Schools system are looking at Lincoln as an example of creative ways to engage students, families and the surrounding community. He said that as a community school, much of what happens at Lincoln originates directly from the parents in the community. Since many parents cited neighborhood safety as a top concern, Hurley said the walking school bus was a practical, and ultimately successful, solution.

“The walking school bus is a perfect example of what community schools do,” Hurley said. “They engage the community to ask, ‘What are the challenges? What are the barriers to student success? How do we all come together to organize and address those challenges?’”

Other community schools considering their own walking school bus program include Auer Avenue School, Longfellow School and Sarah Scott Middle School, Hurley added. He said community schools can create a network to “share their practices with each other” to find the best solution for each school’s specific needs.

United Way has partnered with Lincoln to donate winter clothing to students in need, Stieber said. The donations of jackets, gloves and hats have provided necessary warmth to students who may otherwise go without, she added.

Stieber said she hopes parents will continue to be engaged with the school and put in the effort to help kids learn. “We have some amazing parents already involved, but hopefully we can inspire more parents to come in so it’s a sustainable model for the community.”

Editor’s note: An earlier version of this story misidentified the child in the photo. He is Jonathan Alvarado. We apologize for the error.