You are here: Home / Posts from Community / Mercy Housing Lakefront convenes panel discussion to explore solutions to poverty in Milwaukee
Share this... 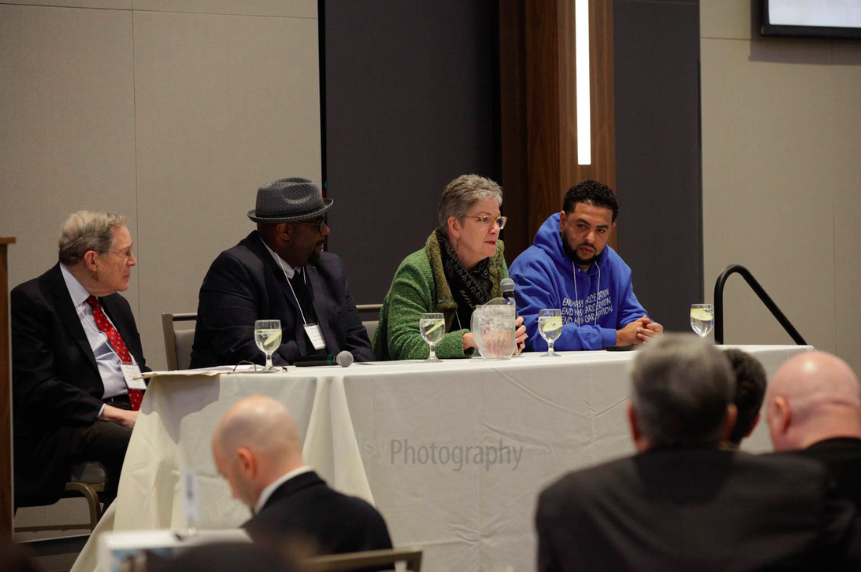 On Thursday, Nov. 15, nearly 200 people gathered at the Milwaukee County War Memorial Center for Mercy Housing Lakefront’s 2018 Live in Hope Reception, which focused on the impact of the justice system on those with limited economic means and actionable solutions to poverty in Milwaukee and across the country. The event featured a keynote address by Peter Edelman, who has spent more than 50 years in the public and private sectors working to create a more just America, and a panel discussion led by several local experts on poverty and the criminal justice system.

Edelman is the Carmack Waterhouse Professor of Law and Public Policy at Georgetown University and the author of the recently released, “Not a Crime to be Poor: The Criminalization of Poverty in America.” During his speech, he discussed the evolution of poverty in the United States and the ways in which the justice system helps reinforce the cycle of poverty for low-income Americans.

“In the United States, a system of modern peonage – essentially, a government-run loan shark operation – has been going on for years,” Edelman said, citing the suspension of drivers licenses for non-moving violations, exorbitant fines and fees for minor offenses and cash bail systems which make it extremely difficult for poor defendants to get out of jail and back to their jobs and families, among other examples of the disproportionate burden placed on those experiencing poverty. Highlighting the need to educate people about the impact of these types of policies and inspire them to take action in their own communities,. Edelman said, “we’re not all guilty, but we’re all responsible.”

Following his remarks, Edelman joined a panel discussion moderated by Marcus White, Vice President of the Greater Milwaukee Foundation, to explore the impact of the judicial system on those experiencing poverty, what’s being done to address the criminalization of poverty locally and how concerned citizens can contribute to solutions. In addition to Edelman, the panel included Judge Derek Mosley, local attorney Joanne Lipo Zovic and community activist Chad Wilson.

In many respects, Milwaukee is a model for the decriminalization of poverty. Highlighting the fact that Milwaukee is the only municipal court system in the country in which all judges are people of color, Mosley discussed the steps that have been taken to reduce the burden placed upon poor Milwaukeeans by the legal system. These include regular warrant withdrawals, the dismissal of driver’s license suspensions, legal assistance paid for by the court for every defendant, no matter the charge, and specialty courts for those experiencing homelessness and veterans which prioritize mental health services and job referrals, among other support mechanisms.

Closing the discussion, the panelists emphasized the value of having difficult conversations about poverty, race and the criminal justice system, and encouraged Milwaukeeans to seek out those with whom they disagree to discuss such challenges.