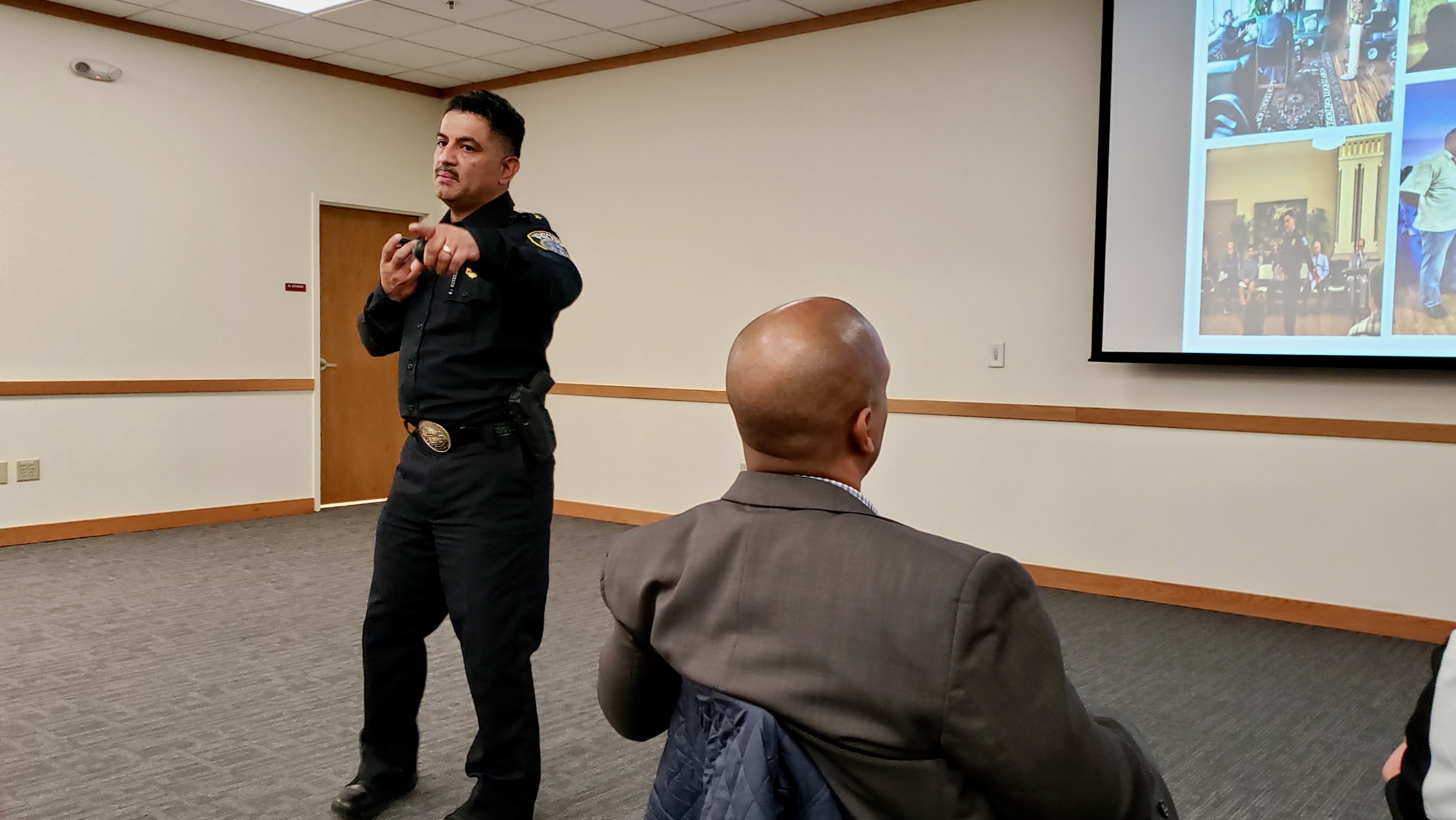 Editor’s note: This story has been updated to correct the spelling of the last name of Olivia and Ernesto Villarreal.

In March 2018, Alfonso Morales greeted a large crowd gathered at Ascension Lutheran Church for a South Side Safety Summit.

Although much of that day’s meeting focused on frayed relations between residents and police, the largely supportive crowd gave Morales, who was serving as interim Milwaukee police chief, a warm reception.

“We love to talk sometimes, but it’s important for us as police to listen to you, the residents,” Morales, a Milwaukee native and second- generation Mexican American who spent much of his law enforcement career in the South Side’s District 2, told the crowd. “It might be negative things that we hear from you, but we need to hear it.”

Morales, who became chief of police in April 2018, announced recently that he’s filed retirement paperwork. His move comes after the Fire and Police Commission demoted him earlier this month to captain. His demotion and departure have drawn mixed reactions among the city’s Latinx population.

Several controversies, including one involving a leaked video that showed a prominent developer being questioned by officers over allegations of sexual assault and one tied to his department’s cooperation with Immigration and Customs Enforcement officials, have dampened enthusiasm for Morales by some.

Businesswoman Olivia Villarreal, business partner and wife of El Rey co-founder Ernesto Villarreal, still stands by the ex-chief. She said she and her husband were disappointed by the commission’s decision to demote Morales.

“We were telling them he was _good for Milwaukee,” she said.

Villareal said Morales made the Police Department approachable again and that he was honest and visible in the community.

“Very different from past police chiefs,” she said. “He will leave with his head held high.”

Morales’ tenure was marked with tensions in the community. During a January community listening session at UMOS, residents teetered back and forth between criticizing Morales and the MPD and praising the department.

“What strategies are in place to ensure we don’t criminalize and harm specific communities,” Voces De La Frontera organizer Giselle Vera asked at one point. Vera’s uncle Erick Gamboa Chay was detained in an Immigration and Customs Enforcement raid in Milwaukee in 2018 and released after being held for six months.

Vera questioned Morales specifically about Relentless Pursuit, a federal initiative to combat violent crime that was launched in Milwaukee and six other cities in December.

Morales said MPD officials don’t make laws but are obliged to enforce them. He said some of the questions from the audience that day were politically motivated.

“We can’t allow organizations to politicize the role of the Police Department,” he said, drawing cheers and jeers from an overflow crowd of more than 150.

Tanya Hernandez, who lives on Milwaukee’s South Side, said she believes Morales tried to do his best for the city.

“I really think had he been given the proper chance and support, he’d probably do great things for this city,” she said.  “He has a personal connection to this city, and I didn’t really agree with that all of the list of 11 items [the FPC] gave him as an ultimatum,” Hernandez said, adding that she supported his decision to retire.

Those directives included requirements to share written and video reports on investigations, provide an update on the department’s compliance with the ACLU “Stop and Frisk” settlement, and to provide a report detailing the MPD’s rationale for using tear gas during recent civil unrest related to the death of George Floyd.

Ald. JoCasta Zamarripa counts herself among those who used to support the ex-chief. She released a statement hours before his demotion, calling for Morales to be fired.

“It is true that I supported Chief Alfonso Morales when he was first appointed,”  Zamarripa said in a news release. “But today, I can no longer support Chief Morales.”

She said some in the community were upset with her comments, adding that others also were displeased with her initial support of Morales.

“My perspective as a Latinx representative is that the community was split, and it’s hard to make everyone happy,” Zamarripa said.

Amanda Avalos, senior civic engagement leader for Leader Igniting Transformation, a youth group that focuses on social and racial justice issues, said Morales should have been fired rather than demoted by the commission.

“He had 2.5 years of missed opportunities to make good on his promises of listening to the community and enacting positive change,” she said.

She said despite their common Latinx heritage, she didn’t share the same beliefs and values as Morales.

“Morales chose to align himself with Latinxs who support Trump and showed it by cooperating and assisting ICE as well as escalating the militarization of the Milwaukee Police Department,” Avalos said.

Avalos said she expected that Morales would leave the department.

“It’s unfortunate that he left without even attempting to fulfill the 11 directives from the FPC but again not surprising,” Avalos said.

In an interview with WTMJ-AM (620), Morales said he and his attorney Frank Gimbel were exploring whether to pursue legal action related to his demotion.

She also criticized Morales mentioning the loss of pension funds as a rationale to retire.

“Knowing pay is more of a priority to him than serving people, he may exit with our blessings,” she said.