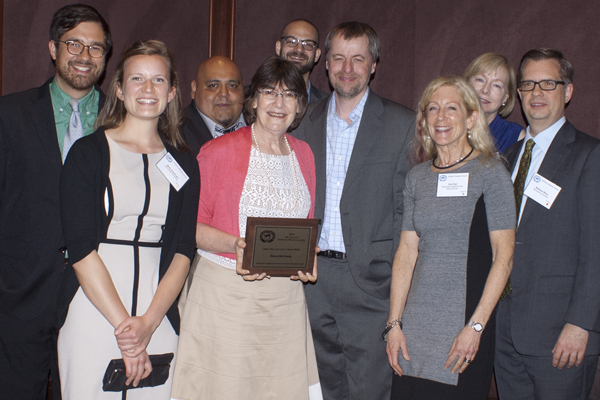 The Milwaukee Neighborhood News Service won three awards for excellence in journalism at the annual Milwaukee Press Club Gridiron dinner Friday, May 15, including a gold award for “Best Local News or Feature Website.”

Edgar Mendez won a silver award for his article headlined “Black men bear the brunt of unequal enforcement of marijuana laws.” At a time when four states have decriminalized marijuana and others are considering it, Mendez reported that minority males in particular suffer harsh consequences from strict, often uneven enforcement of existing laws.

Brendan O’Brien and Sue Vliet won a bronze award for O’Brien’s 14-part series on Poverty in Milwaukee. The series, photographed by Vliet, looked at how poor people in Milwaukee live and work, the support programs available to them and what experts say could be done now to alleviate poverty. O’Brien scoured street corners, alleys, convenience stores and other Milwaukee locations looking for the faces and voices of city poverty five decades after President Lyndon Johnson declared a War on Poverty.

Former ABC News White House correspondent Ann Compton was presented with the press club’s 2015 Sacred Cat award. The award, which has been given annually since 1973, recognizes excellence in journalism at the national level.

Ricardo Diaz, United Community Center executive director, and Linda Mellowes, community volunteer and fundraiser, were presented with Headliner awards, given to those who make a positive impact in Milwaukee.