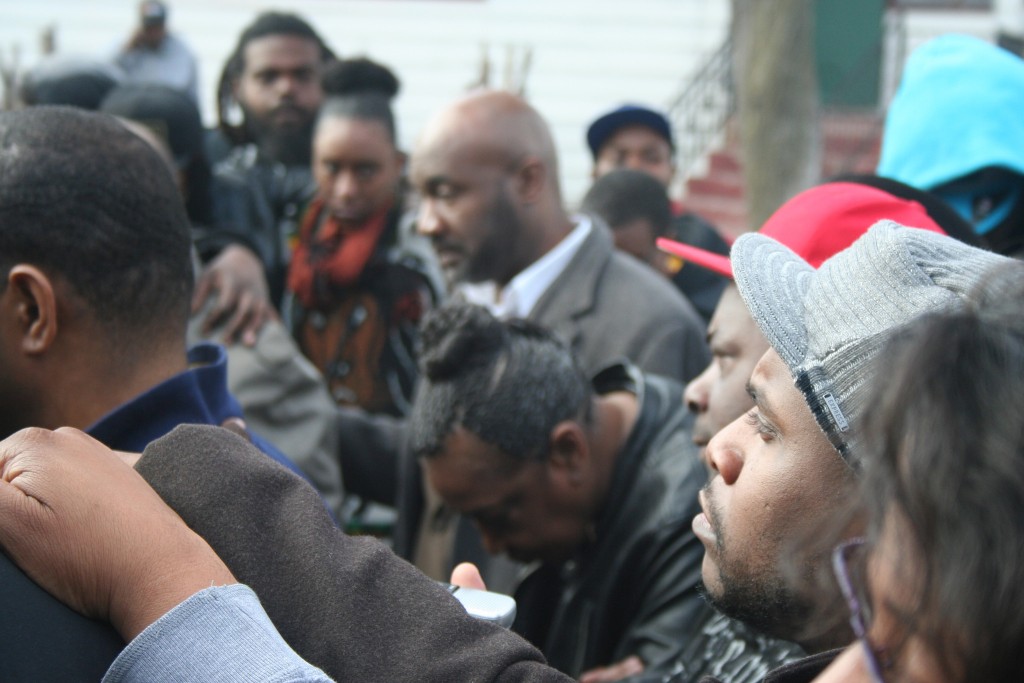 Martha Freeman (center) and others come together at a press conference on March 20 in Garden Homes. (Photo by Jabril Faraj)

On a late Monday morning, Martha Freeman’s cell phone rings. She answers while sitting in her church, Alpha and Omega Ministries, in the Garden Homes neighborhood where she’s lived since 1969. It takes her a moment to remember the man on the other end, but after a short pause they talk like old friends.

“He’s one of the kids who was always on my porch,” said Freeman, who often would have neighborhood children at her house for meals and activities.

Freeman hadn’t heard from Freddie Jefferson in 10 or 15 years. Recently, he saw her on the news and got her number from a childhood friend. He told Freeman that he now works as a cook at Miller Park.

“I love those stories, I love it when they really make it — they’re not out there locked up or carrying a gun or that kind of thing,” she said. “I love to hear that.” 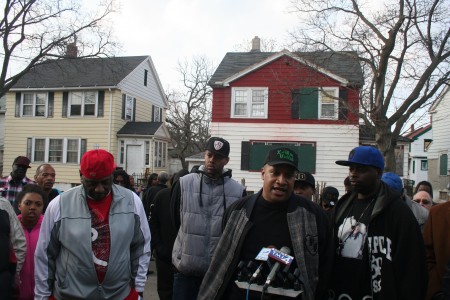 The initiative, recently announced by a coalition of city officials, local activists and neighborhood groups, will take place in four of Milwaukee’s most economically challenged neighborhoods. It will provide community members with violence intervention, workforce development, and education- and health-related services in an effort to improve conditions for residents.

The areas — located at 23rd and Brown streets, 1st and Keefe streets, 27th and Center streets and 52nd Street and Hampton Avenue — are some of the poorest in the city, with poverty levels ranging from 33 to 56 percent of residents. These areas, where more than 80 percent of residents are minorities, face issues including low school enrollment and household incomes, food insecurity and disproportionately high rates of vacant housing and unemployment.

“We want to see our city as a safe zone,” said activist Shawn Moore. “We’re tired of seeing our babies lying on the street … playing in the streets, on their way to prison. Our kids want to be doctors and lawyers and astronauts, too.”

So far, the initiative, which is being spearheaded by Moore and Khalil Coleman, has garnered support from aldermen Ashanti Hamilton, Russell Stamper, Milele Coggs, Willie Wade and Jose Perez, whose districts encompass the four zones. Partners include Northwest Side Community Development Corp., the Garden Homes Neighborhood Association, We Got This, New Hope Baptist Church, Muhammad Mosque #3 and Universal Companies. The group is seeking to add partners.

The Safe Zones initiative is modeled after the Cure Violence/Interrupters approach, which began in Chicago in 2010. That model utilizes “violence interrupters” to identify potentially violent situations and intervene using conflict resolution tactics and mediation. Cure Violence proposes eradicating violence “by promoting a public health and science-based perspective,” which views violence as an epidemic.

Independent evaluations by the National Institute of Justice and Johns Hopkins University found a 30 to 70 percent reduction in shootings and killings in areas in Chicago and Baltimore where the method was employed.

According to the Cure Violence website, the group hires “culturally appropriate workers who live in the community, are known to high-risk people, and have possibly even been gang members or spent time in prison, but have made a change in their lives and turned away from crime.”

The Safe Zones initiative is partnering with two Milwaukee street organizations — the Vice Lords and Growth & Development (GDs), formerly Gangster Disciples. Two men, William Harris Jr., a Vice Lord, and Torre Johnson, who had been associated with the GDs in the 1980s, are also involved.

Both Harris and Johnson spent more than 10 years in prison during the 1990s and early 2000s for gang-related offenses but have since dedicated themselves to nonviolence and steering people away from the life they once led. They, along with Freeman and others, will function as H.O.O.D. Ambassadors (Helping Others Obtain Direction), interrupting violence, mediating conflicts and providing a bridge between the community and local government.

“We’re standing together,” Johnson said. “That’s the first thing that we’re asking people to do is stand with us and then we can work on building.”

Referring to Harris and Johnson, Hamilton added, “I’m trying to work with people. They’re people who we share this city with” who have historically not been “invited to the table.”

Hamilton, who grew up in the central city, said he was steered away from the street life by friends, family and others, including Johnson. He said the ability to relate to central city youth is a skill. “Sometimes you need people with a particular type of experience and a particular comfort level.

“Success should be normal. Options and opportunity should be the norm,” he said. “Instead of saving the kids in these environments by ones or twos, we should be saving them by the hundreds.”

Martha Freeman, 76, has lived in the Garden Homes neighborhood for more than 40 years. She has five children of her own but that didn’t stop her from opening her home to the neighborhood kids. Sack races, movie nights and eating peanut butter and jelly sandwiches were among the activities, but that’s not why they came.

“My house over here on 26th Street has always been a place where people could come and ring the bell if they were lost, if they were afraid, if they just needed somebody to talk to,” said Freeman. “I think that that kind of thing is needed to bring a neighborhood together.”

Freeman, who worked at the House of Correction for 20 years before retiring in September, was able to buy the home through a rent-to-own program.

Referred to by many as ‘Momma Freeman,’ she believes that, in order for these neighborhoods to come together, they need “love, in a big way.” She recalls a young man whose mother would take money from her children to buy drugs. The kids were laughed at and made fun of, constantly.

“Now that he’s grown up, he sells drugs, he rides in a big car, he dresses real nice, you know, because he learned to capitalize off of what caused him a lot of pain,” Freeman said. “He does to somebody else what was done to him.”

Freeman believes that, deep down, those who perpetrate violence don’t really want to — that’s why, when she has intervened in potentially violent situations, people listen. They listen because they know she cares about them.

“A lot of them are really afraid,” she said. “You’d be surprised how they cry at night out at the House of Correction after those lights go out.”

Moore, who became one of Freeman’s “children” after his mother died, said he and others involved with the initiative are “on the streets telling these kids that we love them because we do.”

The initiative will operate by reaching out to those who are perpetrating violence. Harris said there will be training for the H.O.O.D. Ambassadors in “proper intervention and [prevention].”

Coleman said it’s important for the initiative to have ambassadors who can relate to the different communities and people they will be working with.

At the same time, the Safe Zones are not designed to harbor criminals and the coalition does not condone illegal activity. “Never have, never will,” said Hamilton. “Everybody that’s involved with the program understands that. That’s been clear from the very beginning.”

Hamilton added that the initiative is working with the police department to determine when police should step in. He said he would like to see a clear line where organizing ends and police work begins, noting that this boundary has not been difficult to define in neighborhoods such as Riverwest, Rufus King and Thurston Woods.

“The only thing we’re saying is [the ambassadors] are working in a tougher neighborhood with a whole lot more danger,” he said.

So far, the initiative has secured $50,000 in funding; Coleman and Moore are seeking a yearly operating budget of at least $150,000 and hope funds will be reallocated from similar programs associated with Compete Milwaukee and the Milwaukee Area Workforce Investment Board.

In addition, Milwaukee submitted an application to the federal Promise Zone initiative in November, after failing to make the list of 12 finalists for the initial round of funding in 2013. The U.S. Department of Housing and Urban Development (HUD) intends to designate six urban communities from a pool of 97 applicants. Promise Zones will receive technical assistance, staff support and preferential access to existing federal funding.

Either way, more support will be necessary. “It’s not enough just to organize the community — they need to be connected to the infrastructure that will give them the support to take it to the next level,” Hamilton said.

Besides that, the message from Moore was clear: “Let us do the work.”