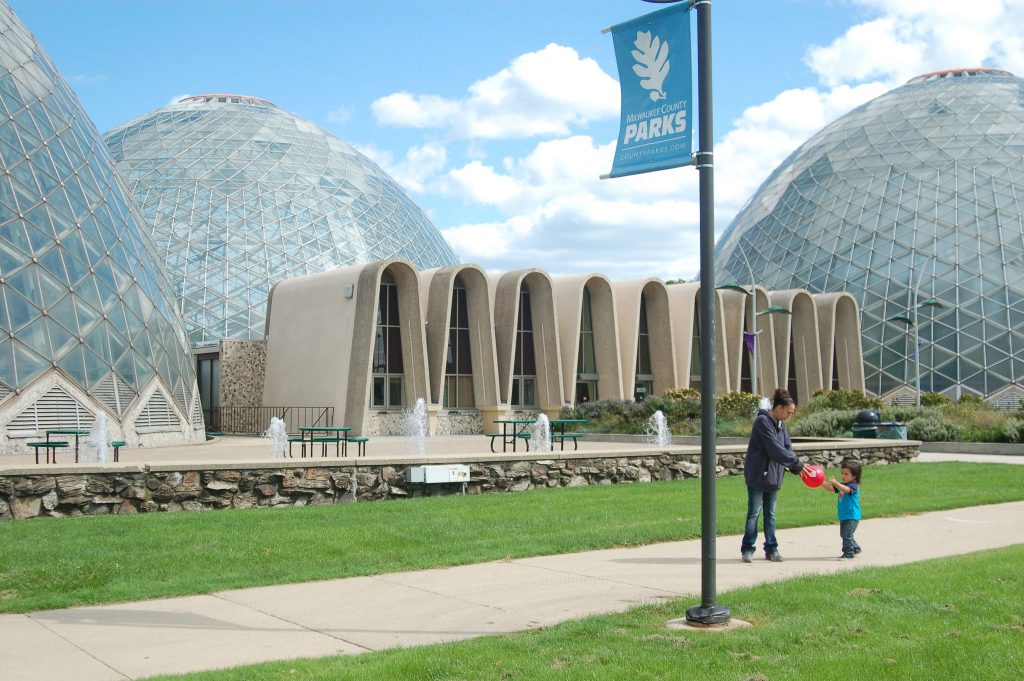 The second of three Mitchell Park Domes, the Tropical Dome (pictured right), reopened recently after being shuttered in February. (Photo by Edgar Mendez)

The Mitchell Park Domes Task Force, composed of county supervisors, local leaders and residents will meet for the first time on Oct. 12, and expects to make recommendations on the future of the conservatory within a year, according to Jason Haas, task force member and county supervisor for the 14th District.

The announcement from Haas comes days after the Tropical Dome, closed since February due to safety concerns, was reopened to the public after installation of mesh safety netting was completed on Sept. 23.

Fallen chunks of concrete from the ceiling of the Desert Dome led to the closure of the Mitchell Park Domes, igniting a controversy about the long-term viability of the South Side landmark. The Show Dome reopened ahead of schedule in late April, and construction is continuing on the Desert Dome, which should reopen in early November, according to county officials.

During a public hearing in February regarding the future of the Domes, Milwaukee County Parks Director John Dargle estimated the cost to reconstruct the Domes at between $61-70 million, though other estimates have been higher. 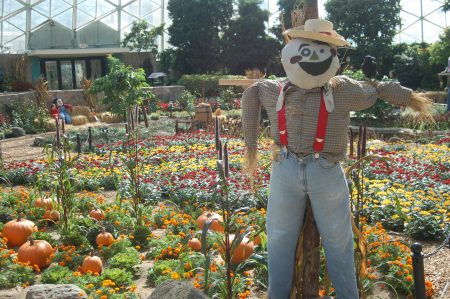 County officials acknowledged that the recent repairs are short-term fixes. The Domes Task Force was created by the county board in March to gather public input and help plot the future of the attraction.

According to Haas, the repairs on the Domes have extended its usability for several years.

“I think the Domes and all of our County Parks are in need of ongoing, sustained funding, ideally the sales tax voters asked for eight years ago,” Haas said in a statement. “At the same time, I’m open to exploring ideas to bring in more revenue such as improved concessions, and ongoing collaboration with outside organizations. The Domes are a major tourist attraction. It’s in our mutual best interests to keep them alive and well.”

The county board has convened listening sessions, the last of which was held in April, and invited residents to participate in the Mitchell Park Domes Survey. The survey asks participants to consider numerous options for the future of the Domes, in addition to other questions.

According to William H. Lynch, task force chairman, input from the listening sessions and how to proceed with the survey will be discussed during the upcoming meeting. As for his personal preference, Lynch stated, “It is too early in the process for me to determine a preference for the future of the Domes.”

Peggy A. West, county supervisor in the 12th District, which includes Mitchell Park, said she is excited to reopen the Tropical Dome to the public and to help determine the future for the conservatory, which opened in the 1960s.

“I am looking forward to continue working with the Domes task force to plot a course for a long happy life for the Domes,” West said. 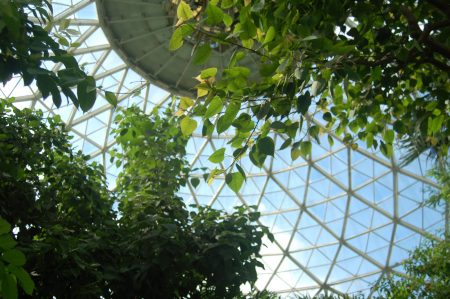 Repairs on the Tropical Dome were completed on Sept. 23. (Photo by Edgar Mendez)

Clarke Square resident Elizabeth Ascencio, who was at the Domes Monday with her four young children, said she hopes the Domes will stay open for years to come.

“This is a place where families can go and where parents can teach their children how to take care of nature,” Ascencio said in Spanish. She said she and her kids visit the Domes at least twice a year.

Carol Paulson of South Milwaukee, decided to visit after learning the Tropical Dome had reopened. Accompanying her was Kibum So, a foreign exchange student from South Korea who Paulson sponsors. Both described the Domes as a wonderful and beautiful place.

She called for the Domes to be repaired and preserved. “It’s a treasure; and it’s equally important as a multimillion-dollar basketball stadium,” said an animated Paulson, referring to the Milwaukee Bucks stadium being constructed downtown.

A grand reopening event for all three Dome is being planned for early December and will be sponsored by Northwestern Mutual, according to Melissa Baldauff, director of communications for the county.

Currently, the Show Dome is highlighting a fall harvest theme, featuring scarecrows, cornstalks, a pumpkin patch, chrysanthemums and other flowers, as well as ornamental vegetables such as kale, said Domes artist Burt Gross.

Gross said attendance at the Domes this year had been lighter than in prior years, since only the Show Dome has been open. But he said that after the Tropical Dome opened over the weekend, attendance had picked up.

“It’s nice to see more people back here again and to see the community excited about the reopening of the Tropical Dome,” Gross said.