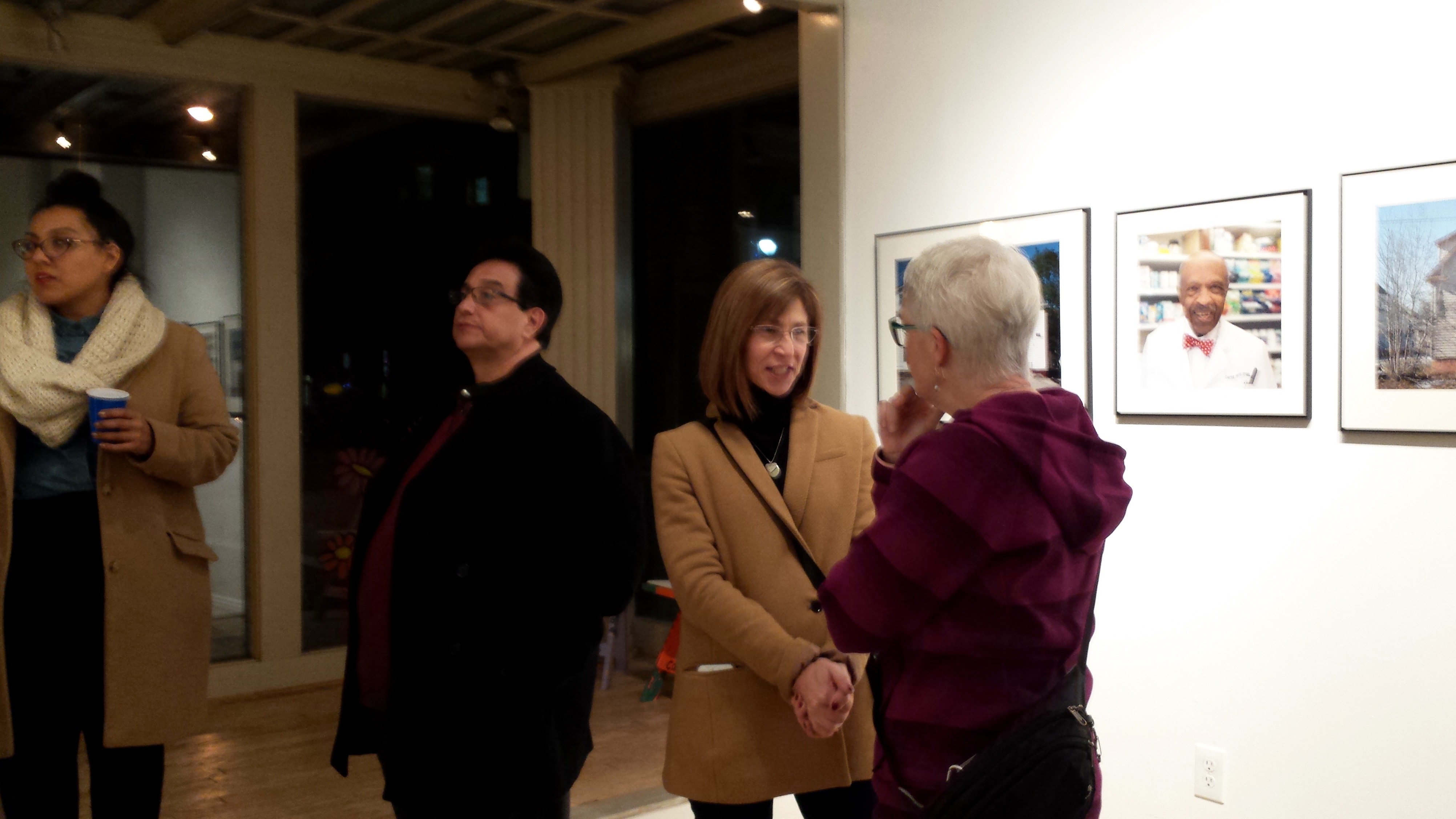 Barbara Miner (right) stands in front of her photos, including an image of “Doctor” Lester Carter. (Photo by Margaret Rozga)

After a week of awakening and rising in the dark, I needed light and beauty. The titles of two art openings in Walker’s Point intrigued me and promised something of what I was seeking: metaphorical light, an important counterpart to natural light. I was delighted at what I found. At the Latino Art Gallery “Pastoral Testimony” features work by Rafael Francisco Salas, while at the Walkers Point Center for the Arts three artists consider the theme “Who Where We.”

Rafael Salas defines his work as “a strange rural poetry of aspiration and poignant reality,” that is “situated between the elevated and the abject.” Exemplifying this vision is an installation that sets a comfortable-looking chair to face an oil painting as if it were a television. My attention was pulled into the dark distance at the center of the painting. At the same time I saw in the foreground swatches of the same flowered design that covers the chair. But then empty beer cans on the floor near the chair raised a question: art or alcohol? Depth or oblivion? Or both? Where are we?

That is also a question posed by the work in the current exhibit curated by Walkers Point Center for the Arts Marketing Communications Coordinator Howard Leu. Here the question gets a more upbeat and playful treatment, suggested by the pun in the title of the exhibit “Who Where We.” The questioning word “where” almost seems a mistake. Shouldn’t the word be “were”? No, not in this exhibit about place and its effects on identity. Each of the artists in her own way brings to light effects and qualities of place often unappreciated or totally overlooked.

Barbara Miner’s photographs catch the beauty in places many people disregard. She says of her “53206: A Dream Deferred” series that dismissing the neighborhoods in this ZIP code as poor and troubled overlooks “the everyday lives of the roughly 29,00 people [who] live in 53206—more than in the cities of Stevens Point or Superior.” Her close up and well-focused photographs fill in those gaps, helping us see workplaces, shops, homes, doorways, and, most of all, people. Her photo of “Doc” Lester Carter, the pharmacist who is a legend in the community, is a special gem, as is the man it honors.

Many of the small pieces Stephanie Barenz includes in her portion of the exhibit have blank or minimal backgrounds. In “Capturing,” my favorite of these works, the people depicted take cellphone pictures of each other, suggesting their concern with image. But these human figures are also rendered with minimal detail, bodies with clear profiles but no facial features. Barenz believes that encountering the unknown can be disorienting and “the act of moving between locations can transform a relationship with the everyday,” a theme she continually explores in her work.

Lois Bielefeld enlarges and enhances our view of the familiar in her “Weekend Dinner” series. Her color photographs are rich in home place details. One that particularly caught my eye shows a bare-chested man sitting in a chair to the side of what appears to be a kitchen table and a woman at the table with food, maybe from a carryout, in front of her, but untouched. Her alert face and eyes give a sense that she may be on the verge of an important realization, a complex moment that in life is probably transitory; but in this piece, that moment lives.

Another highlight of the evening was the gathering of people from across the city and beyond, among them old and new friends. They sparked lively conversations with the artists and with each other about the art and what it shows us about ourselves, our joy in our work, our relationships and the places where all comes together to create such moments of clarity.

This evening of art came after weeks where events outpaced my ability to find words to describe how I felt about them. The work in these two exhibits opened up the new ways I needed to think about where we are during these dark December days. If you feel a similar need, actually even if you don’t, I highly recommend “Pastoral Testimony” at the Latino Arts Gallery, 928 S. 9th St. through February and “Who Where We” at the Walkers Point Center for the Arts, 839 S. 5th St., through Jan. 7.