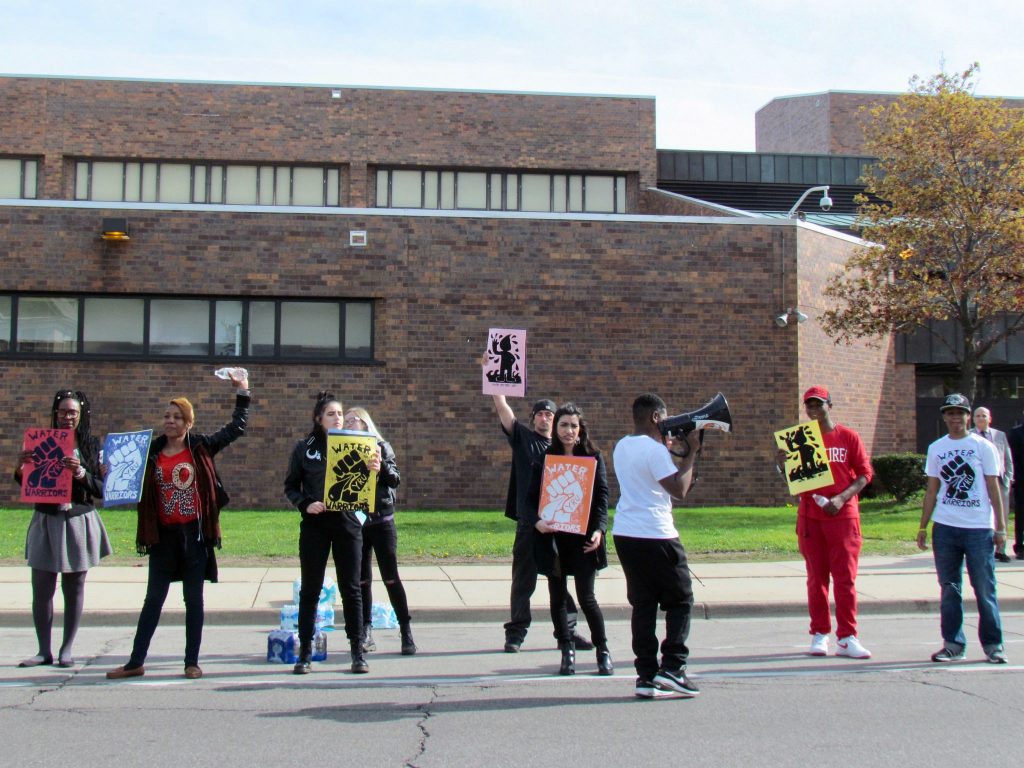 On a recent weekday afternoon, a group of North Division High School students, Milwaukee Public Schools teachers and other supporters demonstrated in front of the North Side school while chanting “clean water,” sporting signs emblazoned with a fist and the words “Water Warriors” and handing out free bottled water to motorists who stopped.

The City of Milwaukee, and its largest school district, have attempted to assure residents their water is safe amidst a growing concern about the negative effects of lead, spurred by the water crisis in Flint, Michigan.

According to a Milwaukee Public Schools (MPS) database, 15 of the school’s 66 water fountains tested over the federal limit of lead allowed in water of 15 parts per billion (ppb).

The protest stemmed from a dispute centered around a recently installed water bottle filling station on North Division’s third floor, an area used for professional development and off limit to students.

“We don’t have a lot of resources that they have on the third floor,” said Shaniya Liberty, a senior at North Division, 1011 W. Center St.

Denise Callaway, head of communications for MPS, said allegations that district officials are exposing students to lead-contaminated water are not true and that MPS has gone above and beyond what is required, identifying and shutting down bad water fountains.

“We have been absolutely transparent in what we have done,” she said. 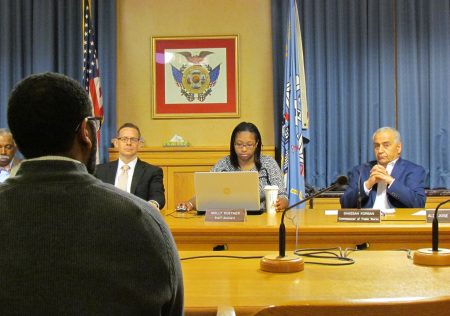 Callway added that the district is doing ongoing testing and created a website to provide information. It plans to replace all fixtures whose lead levels exceed Environmental Protection Agency (EPA) requirements, though she did not provide a timeline. “There’s no reason the students here should be concerned about this, because there is no issue.”

Countered Liberty, “Honestly, what I believe is that we’re being shielded from the truth … We are not being told the truth.”

The episode underscored the mistrust among some community members toward public officials in the wake of a special task force’s unanimous approval of recommendations to address the lead-water issue.

The first recommendation states: “The City should do all in its authority to accelerate the removal and / or rehabilitation of lead service lines within its jurisdiction.” The recommendation was suggested by task force member Ben Gramling — one of two community members appointed to the body. During the final meeting it was elevated to the top of the list after public testimony. The plan also prioritizes the use of water filtration units as a measure to protect families.

Health Department Commissioner Bevan Baker, who sat on the task force, said he was pleased with the initial recommendations and that they are the first step toward “a comprehensive plan.” He added that he hopes the move, and subsequent action, will help “instill some public confidence.”

“We need to do more,” Baker said. But he added, “In absence of federal and state [funds] and an unlimited budget, one has to reduce risks where possible, and I think that’s what we’re doing.”

The 2017 city budget includes $6.5 million that will go toward replacing leaking lead laterals — 300 of which officials expect to replace per year — as well as service lines at 385 certified child care centers and eight private schools. A recent city ordinance also created a cost-sharing program for property owners, capping the cost at $1,600 to replace the entire service line, a portion of which is private.

Last year, the city provided 1,755 filter starter kits to families at no cost through community partners such as Sixteenth Street Community Health Centers and the Social Development Commission. The city expects to purchase and distribute as many as 3,000 additional kits in 2017.

But Black Health Coalition of Wisconsin founder and President Patricia McManus, who was also part of the task force, said the city’s recommendations and actions have not gone far enough. She said there needs to be a more concrete plan to start replacing lead service lines, particularly for low-income residents. She added that the city needs to make “a comprehensive commitment” to replace lead piping, including private plumbing inside homes, though she admitted, “I have a concern about the political will to do that.”

A new report by the Public Policy Forum concludes that “there is little question that local taxpayers and ratepayers will be called upon to dedicate substantial and growing amounts of resources to taking care of their water and wastewater systems for the foreseeable future.” 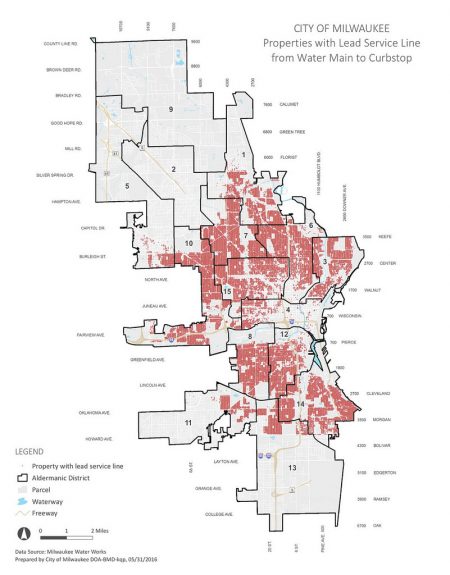 No level of lead in the body is safe, according to the EPA, Centers for Disease Control and Prevention (CDC) and the City of Milwaukee. High levels of lead in the blood can lead to lower intelligence, irritability, restlessness and a host of other health issues. A 2016 Harvard study suggested “cities’ use of lead service pipes considerably increased city-level homicide rates.”

Community members interviewed at the task force meeting, North Division rally and a North Side community meeting said the issue is more about priorities than resources, noting hundreds of millions of dollars have been allocated to the new Bucks arena and a downtown streetcar. Some criticized public officials for not being fully transparent or treating the issue like the public health crisis they say it is.

“We have been poisoned for decades,” said Robert Miranda, spokesperson for the Freshwater for Life Action Coalition (FLAC), a group convened to advocate for clean water. “Don’t let Mayor Barrett or MPS tell you any different. The bottom line is: our water is unsafe,” he added.

Hunger Task Force Executive Director Sherrie Tussler said the city is not doing a good enough job educating residents about the potential risks. “We’re not giving people the information — you have to ferret around on the city’s website,” she said. “All they’ve got to do is tell people, and they’re not telling people.”

She noted that a diet high in Vitamin C, Calcium and Iron can help mitigate lead absorption, especially important for young children, who absorb lead at a greater rate than adults.

“Why are we saying, ‘Go see your doctor’? Why aren’t we bringing the doctors to the kids? Why aren’t we having doctors and nurses test kids methodically?” Tussler asked.

“This is a moral issue,” said Wisconsin League of Conservation Voters Organizer George Olufosoye. “Are you going to let kids continue to get poisoned? That’s the type of argument that we need to make across the state.” He added that lead contamination affects 80 water systems across Wisconsin.

Olufosoye, whose participated in a panel at the community meeting, said it is important to give scientists a platform, and to listen to them, so decisions are based on data and research rather than finances.

“The only long-term solution is to get the lead pipes out of there. That’s the only solution that makes sense in my mind,” said Michael Carvan, a professor at UW-Milwaukee’s School of Freshwater Sciences.

Homes built before 1951 most likely have lead service lines, and also could have interior pipes made of lead. The city plans to replace the lead service lines with copper, a metal that is “5,000 times [less] toxic” than lead, according to Carvan. However, the Water Quality Task Force report notes when a copper pipe is placed “upstream” of a lead pipe it can corrode the lead at a “markedly accelerated” rate “increasing the concentration of lead in the water.”

State legislators are considering two bipartisan bills — Assembly Bill 78 and Senate Bill 48 — that would allow water utilities to provide financial assistance for service line replacement. These bills would allow utilities to pass the cost on to consumers in the form of rate increases. Another bill that would allow municipalities to remediate or provide loans to remediate contaminated private wells or “failing private on-site wastewater treatment system[s]” could further open the door to public assistance for removal and replacement of private, out-of-home infrastructure, but would most likely not apply to interior plumbing, according to District 10 State Rep. David Bowen.

Bowen said the state could potentially help homeowners remediate interior plumbing through a tax credit or other program to make it “as affordable as possible,” but noted it would depend on the budget. Still, he said he would like to see the issue addressed and urged residents to raise these concerns with their local and state elected officials.

He added, “We have to make sure people are engaged in this conversation and it doesn’t stop here.”