You are here: Home / Home / Carousel / City leaders renew call for Sheriff Clarke to be removed from office
Share this... 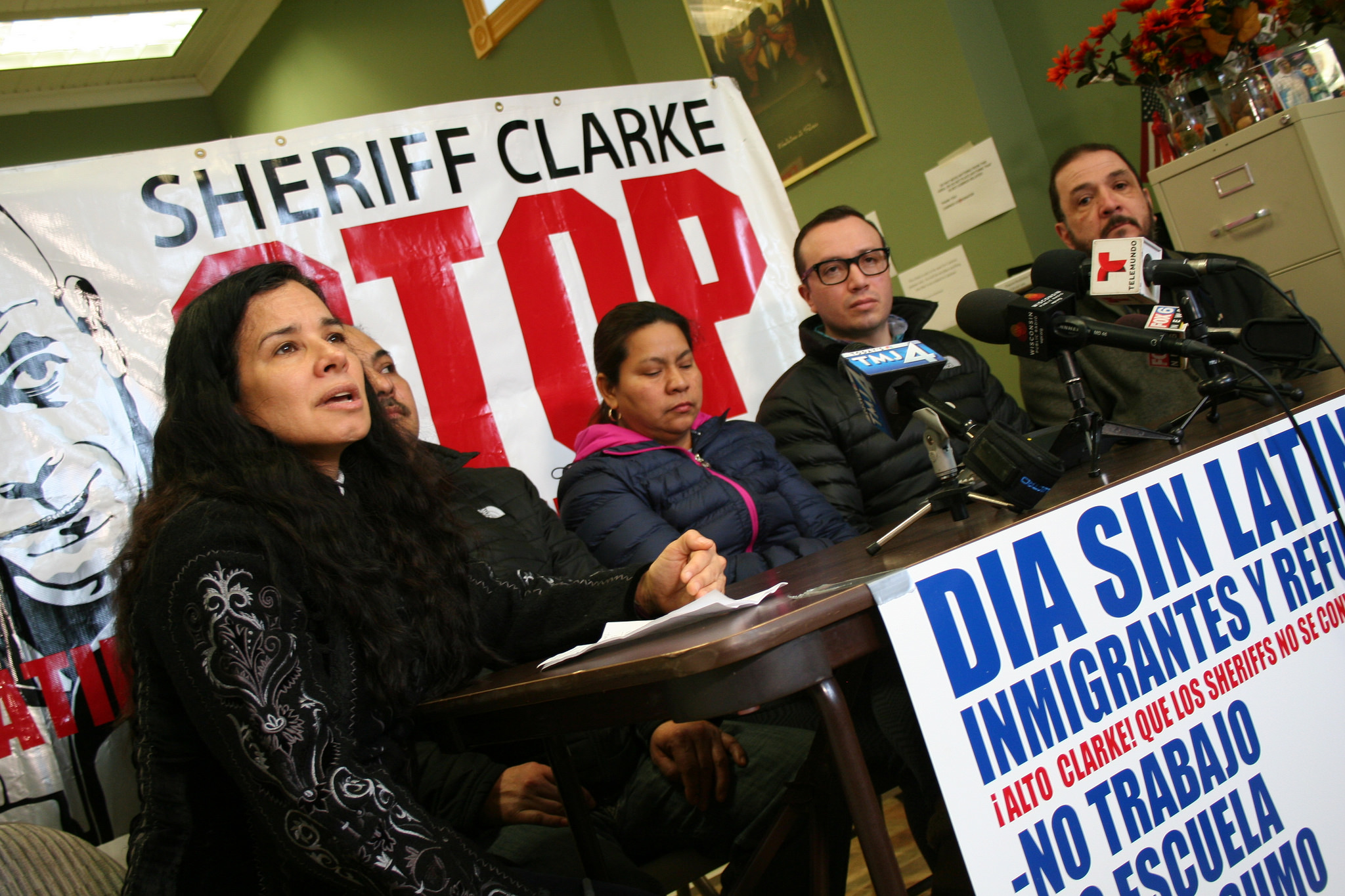 Christine Neumann-Ortiz (left) speaks during a press conference at Voces de la Frontera before the Dia sin Latinos, Immigrants and Refugees boycott and march in February. (Photo by Jabril Faraj

Christine Neumann-Ortiz, executive director of Voces de la Frontera, called Clarke “unfit for his position” and said her organization is urging Gov. Scott Walker to remove him. Voces is an immigrant rights advocacy group that has organized two massive demonstrations protesting policies the sheriff has said he wants to implement in Milwaukee. District 10 Milwaukee County Supervisor Supreme Moore-Omokunde, who has called for Clarke to resign, said, “I still think that’s the best course [of action].”

Neumann-Ortiz cited “human rights abuses” related to recent deaths in the Milwaukee County Jail, an unwillingness to take responsibility for the deaths on his watch and “an unconscionable misuse of public dollars” as grounds for his removal.

“His position should be about building trust with the community and making sure people have their due process rights, and their human rights, respected when they’re … going through the criminal justice system and the County Jail,” she said. “I think anyone else on the street would be held to a different standard.”

The Milwaukee County Sheriff’s Office and Sheriff David Clarke declined to comment for this story. Wisconsin Gov. Scott Walker’s office did not return calls and voicemails requesting comment. Walker, who, unique among officials, holds the power to remove the sheriff, has previously said he would not exercise that power. 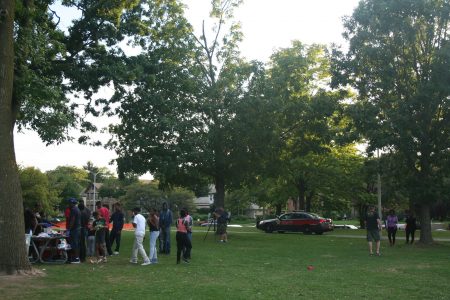 A sheriff’s vehicle patrols Sherman Park, at the tail end of a three-week park curfew imposed by Sheriff Clarke, which he eventually dropped because of a court ruling. (Photo by Jabril Faraj)

District 16 Supervisor John Weishan, who offered the amendment, said the typical price tag for settlements in wrongful death cases is in the millions. He cited the case of Dontre Hamilton, shot by police in 2014, whose family will receive $2.3 million from the City of Milwaukee, and Tony Robinson in Madison, whose family will receive $3.35 million.

However, District 12 County Supervisor Peggy West said “it’s impossible to say” what kind of payouts the county may be on the hook for down the line.

But Neumann-Ortiz called the Sheriff’s Office under Clarke “a bottomless pit,” comparing him to former Maricopa County, Arizona, Sheriff Joe Arpaio, who pioneered the tactics Clarke employs. Arpaio is facing jail time for overstepping the bounds of the law while carrying out his duties in office.

Moore-Omokunde expressed skepticism about giving Clarke any more funds because he said the board is unable to control where he would spend the money.

Clarke has said he expects to resign in June to accept a position in the Department of Homeland Security (DHS), but DHS has not yet confirmed the appointment. If Clarke is still serving as sheriff, he will be up for reelection in 2018.

Accusations that Clarke has abused his office have come to a head in recent weeks, since Clarke announced that he had been offered the federal appointment.

Among the accusations is that Clarke has neglected his duties and benefitted personally from taxpayer-paid trips. The Sheriff’s Office recently released records of Clarke’s calendar in response to a record request from FOX6. The heavily redacted schedule showed 90 of the 640 days requested. From January to March 2015, Clarke billed more than $21,000 to his Milwaukee County credit card for flights, hotels and food. Sixty-eight of the 90 days show no record of Clarke conducting business in Milwaukee County.

In January, Clarke detained a Milwaukee man, Dan Black, for shaking his head at the sheriff on a return flight to General Mitchell International Airport. According to West, Black “believes that the sheriff misused his office and county resources to illegally detain him,” per a complaint he filed after the incident. In February, Black filed suit seeking monetary damages.

West, who is chair of the county board’s Finance Committee, said Clarke has not allowed his staff to talk to the county’s Audit Department, which is responsible for investigating the complaint. She said the board recently authorized $35,000 to hire a lawyer to resolve the situation.

Four 2016 deaths at the Milwaukee County Jail have increased scrutiny of Clarke, particularly the April death of Terrill Thomas, 38, which was caused by dehydration after corrections officers reportedly cut of his water supply for six days. In interviews since, Clarke has openly mocked Thomas, who was arrested after shooting a man in the chest and firing an additional two shots at Potawatomi casino later that night. Thomas was diagnosed with bipolar disorder.

In early May, an inquest found probable cause for a crime in the actions of seven jail employees who were involved in Thomas’s death. District Attorney John Chisholm will decide whether to bring criminal charges.

Walter Stern, an attorney for Thomas and two family members, equated the circumstances that led to Thomas’ death with “torture.” Stern has filed a civil suit with the county. He said the goal will be to seek damages “substantial enough to compensate and to be instructive to never (again) have something like this happen.”

“What happened at that jail was, there is a culture that was created … And that culture starts at the top,” said Moore-Omokunde, adding that Clarke should not be absolved of responsibility should that case continue.

“This is someone who has threatened to beat up local elected leaders, and someone who would try to ram through these programs that have brought a wave of protests here,” said Neumann-Ortiz. “We don’t believe he should be in office in Milwaukee County and he should not be in office at the national level.”