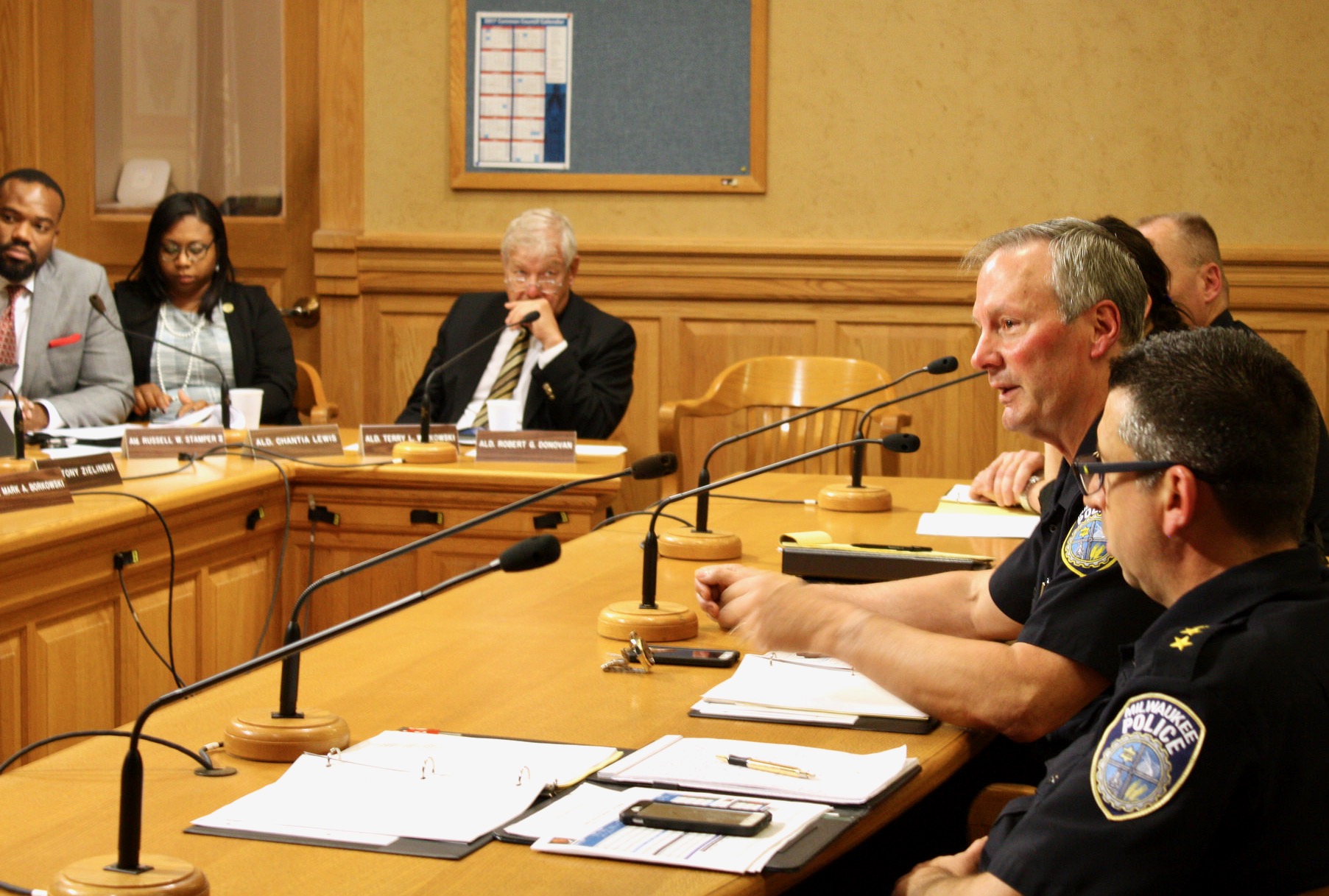 When Milagro Jones, 27, was assaulted in front of his then-2-year-old daughter in November 2015 while waiting for a bus downtown, he was wearing a suit and tie. Jones was working at City Hall as a Public Ally doing homeless outreach. But Jones, who has experienced chronic homelessness, also had a felony conviction at 19 and had been “in and out of prison” since coming to Milwaukee in 2005.

He even videotaped the encounter but, when Milwaukee Police Department officers arrived on the scene, they told Jones “to pretend that me and my daughter weren’t assaulted and I’m just going to go on my way.”

When he refused, the officers gave him a ticket for disorderly conduct. Jones, who was sleeping in Red Arrow Park at the time, had to miss work to attend multiple municipal court hearings. On the day of his trial, the officers didn’t show, according to Jones, and the case was dismissed.

“If I had to write down the number of times that this police department has … did me and my family wrong, I would fill up books,” he said.

Negative community interactions with police officers, particularly the 2014 killing of Dontre Hamilton in a downtown park, were part of the reason Milwaukee Police Department Chief Ed Flynn requested a collaborative reform process with the U.S. Department of Justice (DOJ) Office of Community Oriented Policing Services (COPS) at the end of 2015. When it began, residents called for a formal DOJ investigation into MPD’s patterns and practices. 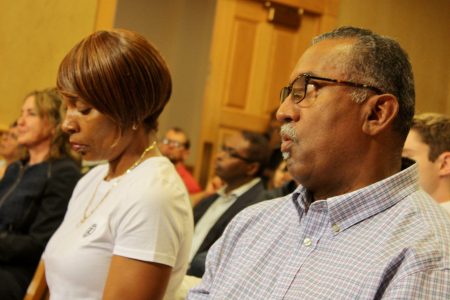 At its most recent meeting, on Sept. 21, the Fire and Police Commission (FPC) decided to move forward with the process, despite changes to the Collaborative Reform Initiative announced by U.S. Attorney General Jeff Sessions Sept. 15.

The DOJ process was not completed and a final report will not be released because of the changes. A DOJ official said neither a recently leaked draft report “nor any other draft” was finalized and, therefore, “any reliance on that draft would be unwarranted.”

However, State Sen. Lena Taylor said the report outlines some of the same concerns people in the community have been raising for years.

“This isn’t new. This has been going on long before us,” she said. “If we want different, we’ve got to do different. And, the truth of the matter is, we’ll never build trust if we don’t begin at the place of transparency and accountability.”

The FPC did not respond to questions about how the process would be structured or when it would be completed.

Bianca Shaw, a representative of the Zielder Center for Public Discussion, which has held police-resident dialogues across the city for the last two years, said citizens must be involved from the beginning.

The draft report, which includes more than 50 recommendations, said MPD lacks racial and gender diversity and that officers generally do not understand community policing — which the department claims it has practiced for years. It also stated that MPD’s body camera policies are inconsistent, its traffic enforcement strategy disproportionately affects African-Americans and it does a poor job of documenting and processing citizen complaints.

In his opening address at a Sept. 14 Common Council Steering & Rules committee hearing to discuss the report, Flynn derided the draft as “inaccurate and defective,” adding that it is “riddled with objective, factual errors of omission and commission.” Flynn criticized the DOJ’s use of consultants to create the report and said that MPD was not allowed to “correct the record” regarding parts he said were inaccurate, but declined to provide specifics. He said it was “stacked … with anonymous personal anecdotes, unsupported by any data.”

However, MPD said it agreed with most of the recommendations, except for three or four, “because we already did that” according to Leslie Silletti, director of MPD’s Office of Management, Analysis, and Planning. MPD did not respond to questions from aldermen on what the three or four recommendations were. 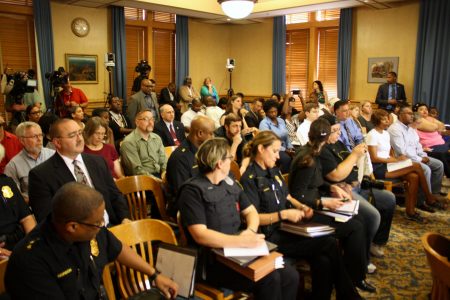 More than half a dozen community members who spoke at the hearing called for accountability for what they described as “murders” and other abusive behavior by police, often toward black and brown individuals.

Milwaukee police have been involved in a number of high-profile killings of unarmed black men, most recently that of Hamilton, who was shot 14 times in Red Arrow Park. Flynn fired the officer involved for failing to follow procedure in his interaction with Hamilton.

Between 2008 and 2012, more than 50 people sued the City of Milwaukee and Milwaukee Police Department alleging improper strip and cavity searches in District 5, which is almost exclusively African-American. One officer served a 26-month prison sentence; at least five other officers were forced to resign, but did not serve jail time. One officer involved in the scandal was up for promotion at a recent Fire and Police Commission meeting.

Community activists called for implementing policies to formalize discipline and ensure accountability for officers. They said police officers have too much discretion, which is often more advantageous to them than to citizens. They also demanded that officers who have a track record of bad behavior lose their jobs.

“Leaders have to be followers — you can’t enforce law if you can’t follow it,” said Vaun Mayes, a Sherman Park resident and founder of Program the Parks. “You can’t tell somebody to do something that you wouldn’t do.”

“We can no longer sit down and say, ‘We’re doing everything that can be done, we’re doing the right things already,’” said Darryl Morin, former national vice president of the League of United Latin American Citizens (LULAC) and a member of the Community Coalition for Quality Policing (CC4QP). “We have to be honest, address the issue and be willing to work together.”

Morin said CC4QP also plans to move forward with an independent review of particular MPD policies, many of which are addressed in the draft report. Flynn said he “would welcome the report,” according to Morin, who added the coalition is in the process of securing funding to conduct the review.

Flynn, whose testimony evoked jeers at the hearing, declined to speak as he left City Hall surrounded by officers, but struck a more conciliatory tone a week later at a ribbon-cutting ceremony for a mural on 47th and Center streets.

“We’re in this together — there is no cavalry coming. There is the police and the community and the challenges we mutually face. And, sometimes there’s going to be strains and stresses in that relationship,” said Flynn. “We all want safe neighborhoods where children can thrive and people can chase the American Dream. The only question is: how are we going to get there together?”

Alan Schultz, a member of Ex-Prisoners Organizing (EXPO), said Flynn, who has often lamented that MPD operates as the “social service agency of default” for Milwaukee’s central city, should call on the Common Council to fund non-police programs to “lessen repetitive cycles of endlessly increasing public safety expenditures.”

Schultz said, “He should be taking that initiative, as a leader.”