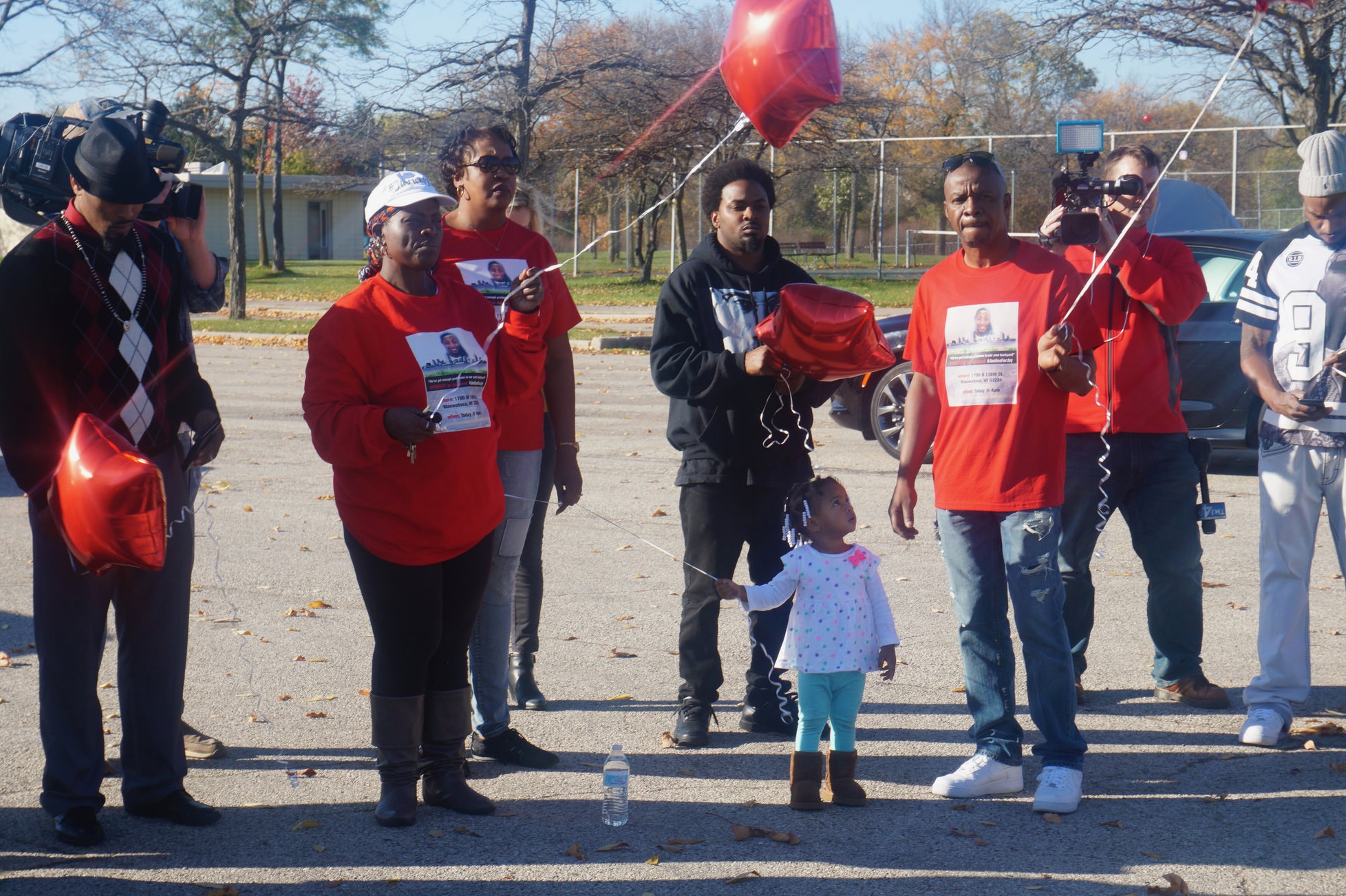 Jay Anderson’s 1-year-old daughter, Jaelyn, his mother, other family members and supporters release balloons in the park where Jay Anderson was killed by a Wauwatosa police officer. (Photo by Amerikus Luvene)

A community-led process to reform the Milwaukee Police Department recently kicked off with two town hall meetings on the city’s near North Side.

The meetings, held at Dr. Martin Luther King Jr. Elementary School, 3275 N. 3rd St., are the first step in the Milwaukee Collaborative Reform Process, which will continue a reform process initiated by the U.S. Department of Justice in late 2015. Input from the town halls and a series of community conversations set for early 2018 will determine priorities, according to Common Council President Ashanti Hamilton and the Fire and Police Commission.

Suggestions included requiring all officers to be trained as Community Liaison Officers, requiring officers to log a reason for traffic stops before exiting their vehicle, creating clear guidelines for what happens after an incident where force is employed and developing a clear process for submitting, and following up on, complaints.

“We know the community is burned out on town halls and listening sessions, so we want to let them know that this is something that’s going to be different,” said Markasa Tucker, director of the African American Roundtable (AART). “These are solution-based recommendations that we’re looking for.” 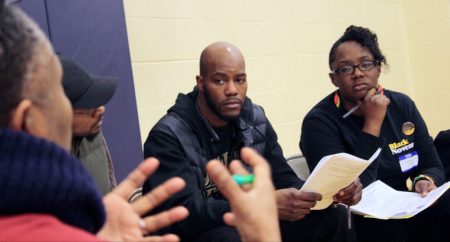 Nate Hamilton (left) and Markasa Tucker look on as a resident comments during the town hall discussion. (Photo by Jabril Faraj)

To that end, feedback opportunities, which include two more town halls on the South Side at the end of January and smaller community conversations, also set to take place early next year, will employ a circle-based format with facilitators to keep the discussions focused. Organizers hope that recommendations will emerge from these conversations to address the findings of an unofficial draft report by the U.S. Department of Justice, which some community leaders say mirrors concerns African-American residents have been raising for years.

The focus, Tucker said, is to listen to residents because, “they know how they want to be treated.” The Fire and Police Commission (FPC) will launch an online portal for residents to submit additional feedback in January.

Angela Harris, a K5 teacher at Dr. Martin Luther King, Jr. Elementary School, said she was “very encouraged by the conversations” and solutions that were posed by community members.

County Supervisor Supreme Moore-Omokunde suggested re-launching a coalition of community groups that would collaborate to address violence and quality-of-life issues in challenged central city neighborhoods. The Community Safety Coalition, a group of community-based organizations, faith-based groups and individuals, was briefly convened during the tenure of Police Chief Arthur Jones in the early 2000s. The coalition would be “an opportunity for these organizations to work in collaboration with one another,” Moore-Omokunde said.

Others suggested slashing the police department’s budget and directing those funds to other groups or organizations that could be more effective.

But Charlie Ratliff, 60, a long-time Harambee resident, said, “It’s about education and empowerment,” explaining that the issues are much larger than just the police, who he called “gatekeepers.” He stressed the importance of educating black children about their history and seeing black neighborhoods as valuable.

“My people have been denied so long,” said Ratliff.

Jamel Harris, Angela’s husband, said he attended the first town hall to get more information after hearing about the DOJ report on the radio. Harris called the relationship between community and police “broken.” He said it is “a disgrace to the citizens of our city” that, as the report notes, MPD does not have procedures in place for hiring, promotion and other “basic things” companies are responsible for, adding that the department lacks “professional standards.”

“It shows why the behavior of our police force is the way it is,” Harris said.

“This is not something new for Milwaukee,” said America’s Black Holocaust Museum Head Griot Reggie Jackson, referring to high-profile police killings of black men. “This has been an ongoing issue for decades.”

In 1958, Daniel Bell was shot and killed by Milwaukee police officers who planted a knife on the 22-year-old black man’s body. During the summer of 1967, 18-year old Clifford McKissick was shot and killed by an officer under dubious circumstances. And, in a case many in Milwaukee still remember, 22-year-old Ernest Lacy died in the back of a police van after being misidentified as a suspect in a rape case; the three officers involved had been scheduled to be tried by the Fire and Police Commission earlier that evening for brutalizing another man, but the trial was postponed.

More recently, the 2012 suffocation death of Derek Williams while in the back of a police car — ruled a homicide by the medical examiner — and the case of Dontre Hamilton, shot 14 times in 2014, have made headlines.

In the wake of Hamilton’s killing, Milwaukee Police Department (MPD) Chief Ed Flynn asked for the U.S. Department of Justice (DOJ) Office of Community Oriented Policing Services (COPS) to begin a process to, in collaboration with MPD, examine the department’s policies and practices. The goal was, ultimately, to reform the department, which has struggled to inspire community confidence for decades.

The process, which began in late 2015, was not completed and an official report, initially expected 18 months later, was never produced. However, in August, a draft report was leaked, which led to a community discussion about how to proceed. Flynn derided the draft report’s accuracy, while saying he agreed with most of the 50 findings; about a week later, he struck a more conciliatory tone, saying it is up to police and the community to address the challenges they face together.

Community groups, led by the African-American Roundtable, announced in October that they would take the lead in soliciting feedback from residents to inform the reform process.

FPC Operations Manager Clifton Crump called the town hall “a great starting point.” The next step, he said, will be for the committee leading the process to produce a report for the FPC. Based on that report and other feedback, the FPC will consider changes to MPD Standard Operating Procedures. Tucker said she expects the report to be finished this spring.

“Then it’s up to the policymakers,” said Crump, referring to the 2019 budget process at the end of next year.

MPD Spokesperson Sgt. Timothy Gauerke stated in an email that the department is developing a plan to implement recommendations, and that MPD is dedicated to “increasing transparency through this process.” In a statement issued at the end of November, Flynn said MPD will “partner with the community at large … to implement recommendations and prioritize responses to the findings,” adding that Flynn supports the process as a way to build trust.

Facilitator and UBLAC member Lisa Jones summed up what she heard at the first town hall. “We would like the police to treat the community with care, love and respect. If that happened … we could really flip and change the narrative.”

Jackson added, “Unless we want to be sitting here 20 years from now having the same conversation again … we need to begin to not just talk about these issues, not just ask for the changes to happen, but to begin to demand that the changes happen. That’s the only way we’re going to see progress.”