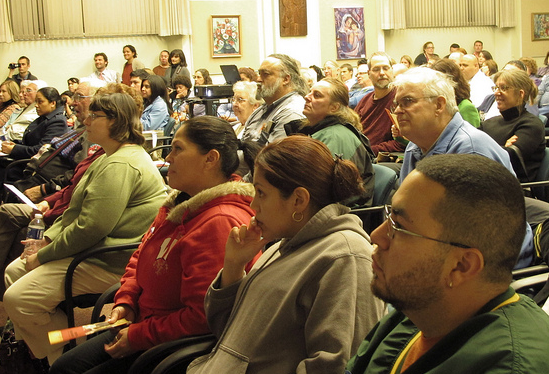 Sixteen years ago the School Sisters of St. Francis held a meeting to decide whether to move their international headquarters out of Milwaukee, citing growing concerns about crime and safety in what was then viewed as a deteriorating neighborhood.

Rather than choosing to leave their building at 1501 S. Layton Blvd., the sisters reaffirmed their commitment to the city by forming Layton Boulevard West Neighbors (LBWN), a non-profit organization designed to serve the needs of the Silver City, Layton Park and Burnham Park neighborhoods.

At its recent annual gathering, LBWN announced the next steps to transform the once-struggling neighborhood into a thriving one: a Quality of Life plan developed as part of the Zilber Neighborhood Initiative (ZNI).

The plan for Layton Boulevard West had its origins in 2004 when LBWN began a planning process to improve the neighborhood. The plan was expanded in October 2010, when the Zilber Family Foundation selected Layton Boulevard West Neighbors to spearhead the effort to create and implement a comprehensive community development plan with neighbors and other local partners. LBWN received a grant of $875,000 over four years from the foundation.

Among seven overlapping strategies announced at the meeting are: improving the appearance of the neighborhood by sprucing up public spaces and featuring more public art; creating a community safety network by forming and connecting block clubs; and developing and marketing a distinctive community identity for the Layton Boulevard West neighborhoods. Implementation of some strategies has already begun; others, such as supporting youth education and leadership, are still in the development phase.

Combined, the strategies represent the vision that residents have for their neighborhood, according to Daniel Adams, neighborhood plan coordinator for LBWN.

Creating the plan took nearly a year of one-on-one interviews with more than 200 residents and convening nine focus groups, 18 workshops and eight meetings of the 14-member Plan Advisory Committee, half of whom are neighborhood residents.

Organizers hope that the plan will accomplish the goal of stabilizing and revitalizing the neighborhood, according to Charlotte John-Gomez, executive director of Layton Boulevard West Neighbors (LBWN).

Key to the plan is to seek out opportunities for economic development. LBWN plans to foster economic vitality in the area by funding a market analysis that will identify how existing businesses can grow, what new businesses will complement the local economy and where they should be located.

Burnham Park storeowner Greg Mertens of Wildflower Bakery, 2800 W. Lincoln Ave., says that the increased attention and development in the area already has benefited his business.

“I’ve gotten customers from all over Milwaukee in my store and I think it’s because they are taking notice of the safety and stability of the neighborhood,” said Mertens.

A key strategy that’s beginning from the ground up is youth education and development, according to Jezamil Vega-Skeels, neighborhood planner for LBWN.

“There are 7,350 kids in LBWN and only one Community Learning Center (CLC) despite a wealth of schools in the area,” Skeels said.

Skeels said that part of the strategy is to attract local agencies to provide after-school activities for local youth. Working with neighborhood young people will encourage them to be more committed and connected to their neighborhood, she added.

Darryl Schaber, who moved to Silver City four years ago, feels that connection.

“I’ve made friends here; I’ve also learned from the LBWN about reimbursements for money I’ve spent to improve to my home,” said Schaber, who won a $1,000 prize for winning the most improved porch contest this summer.

Sergio Gonzalez, who lives Layton Park, also feels a strong connection to his neighbors, he said.

“My family and I feel great living here, and I’m happy to finally get to know the people that live around me and also the agencies that serve me,” said Gonzalez. He recalled other neighborhoods where he lived for years and still did not know his neighbors or local groups.

But, without the continued cooperation and help of the neighbors, the strategies will not work, according to Adams.

“The plan is in your hands and ours together,” Adams said to the crowd.