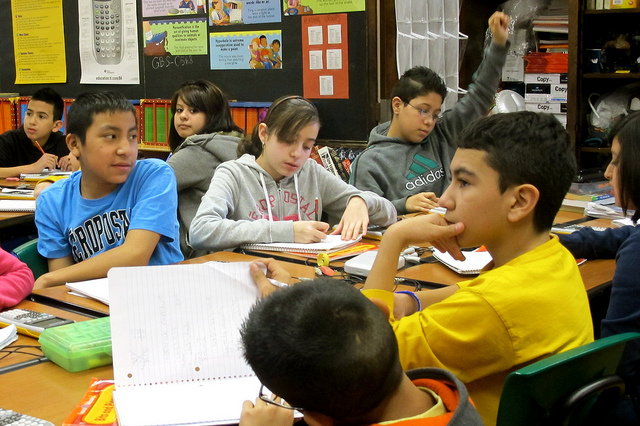 Once non-native speakers learn English, they score higher on state proficiency tests in reading and math than their non-ELL peers. An analysis of MPS data on English Language Learners (ELL) found that this pattern holds true for the district as a whole, and is even more pronounced in the south side elementary schools with the largest percentage of Spanish-speaking ELL students.

The findings are based on data from the 2009-2010 Wisconsin Knowledge and Concepts Examination Criterion-Referenced Tests (WKCE-CRT) in reading and math, which are designed by the Department of Public Instruction (DPI) and Wisconsin educators in conjunction with CTB/McGraw-Hill.

The elementary and middle schools included in the study (Allen-Field, Forest Home Avenue, Greenfield Bilingual, Hayes Bilingual, Longfellow, Mitchell and Vieau) are all those with more than 30 percent ELL students within the 53204 and 53215 zip codes, both predominantly Hispanic areas of Milwaukee.

In Wisconsin, ELL students are classified into one of six levels. Students’ levels do not correspond to their grade level. Students in ELL levels 1 – 5 commonly share the same classroom.

The percentage of students proficient in reading and math generally increases as students move up through the levels.

Once students reach the fourth level of English language proficiency, they outperform their non-ELL peers in math at all seven schools, and in reading at five of the seven.

Related: See all figures on one page

Jesus Santos, director of bilingual-multicultural education for Milwaukee Public Schools, explained that the schools provide differentiated instruction based on which level of English proficiency a student falls into. ELL students are then able to work within both their grade and proficiency level, according to Santos.

“We get new students all throughout the year. For example, we might get fourth- grade students who’ve just arrived from El Salvador or Mexico and they’ll have very different needs than other students in their class,” Santos said.

“Immigrant students can compare their educational experience in Milwaukee to that of their home countries; they see that there are more resources present in MPS than the schools they came from and as such tend to remain engaged and focused for a longer period of time,” Tapia said.

Success in elementary and middle school does not necessarily keep ELL students in MPS.

“We lose them (ELL students) continuously to private or parochial schools and some to Chapter 220 (open enrollment),” Santos said.

In addition, Tapia said that successful ELL students who leave neighborhood schools by the time they reach high school might actually be better off.

“You may have a number of ELL students who are proficient at the elementary and middle school level but if they end up in a high school that is troubled and doesn’t provide a good orderly environment, the students might get sidetracked,” Tapia said.

He added that his research has found that those who leave the district for suburban schools are more likely to be successful because they are in an environment with high “cultural capital.” Places with high cultural capital have “available resources based on group memberships, relationships and networks of influence and support,” he said.

At MPS, English proficiency is a goal, but transitioning students out of ELL courses is not, according to Maria Sanchez, longtime principal at Greenfield School, 1711 S. 35th St. More important is maintaining their language and their culture.

“We have numerous activities and programs here at the school which reflect both languages and cultures,” said Sanchez, who was born in Waukesha to Spanish-speaking parents.

Like Greenfield, nearly all MPS schools — including those in the study except Hayes, which uses a two-way bilingual model — follow the developmental model of bilingual education, which stresses maintaining the student’s native language and culture rather than focusing solely on learning English.

Santos, the director of bilingual-multicultural education for MPS, pointed out that the developmental model is different than many programs in the state “because it focuses on helping the students gain the native language literacy skills first and then we make a transition to English.”

“It takes from 5-7 years to completely acquire a language; language acquisition is a slow process but it is quicker when you do (it) at an early age,” Santos added.

But a patient approach can also hinder schools that depend largely on federal funding from Title III of No Child Left Behind (NCLB) to pay for learning materials and extra teachers to help bilingual students.

Because math and reading proficiency rates must be reported for the school as a whole rather than by ELL level, Title III funds could be in jeopardy if too many students are at lower ELL levels, Santos said. In other words, schools with students who need the most help are more likely to lose funding under NCLB.

The gradual approach is also a challenge for some parents, who tire of hearing that their child is not yet proficient, according to Maria Gonzalez-Nunez, who teaches fourth grade at Greenfield. She said that some choose to remove their children from ELL courses, preferring the “sink or swim” model of English learning that was common for early U.S. immigrants.

Gonzalez-Nunez said that she tries to convince parents that eventually their children will not just be on the level with their peers, but they will excel.

At that point, language becomes a non-issue and the challenge becomes making sure students maintain their Spanish.