You are here: Home / News / Community / Gilda’s Club takes cancer support to the neighborhoods
Share this... 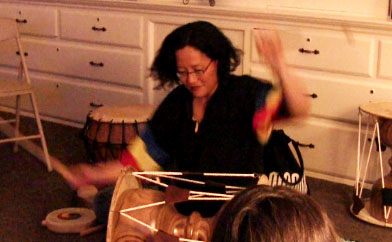 When Oakland Avenue in Shorewood turned into a river during the flood of July 2010, water poured into the building that housed Gilda’s Club of Southeastern Wisconsin and caused extensive damage. But the cancer support organization turned the natural disaster into an opportunity.

“One of the things that I always noticed about Milwaukee is that people like to stay in their neighborhoods, and we heard a lot of people say, ‘Oh, you’re too far away, you’re all the way in Shorewood,’” said Susan Mingesz, clinical program director at Gilda’s Club of Southeastern Wisconsin.

“We understand that when people have cancer it’s very hard to travel across town, possibly in bad weather, possibly when your feet may be slightly numb from chemotherapy,” Mingesz said. “There were several of us who really felt it was too bad we couldn’t be in more communities.”

Initially, Gilda’s Club opened a “living room” at the JCC because it is closest to its former clubhouse. About a year ago, it began to offer programs at Agape Community Center.

The activities, wellness groups and information sessions Gilda’s Club offers to people with cancer and their families did not attract many people at Agape in its first year there.

“I think it’s hard for people who often can be very busy, who are sick with cancer and aren’t quite sure why they should take the time to come to a community center,” said Mingesz.

Getting support is important, she said, because cancer impacts lives in so many ways. The disease and its treatment often cause trauma to the body that affects a person’s body image, position in the family, financial situation, social life and sense of control.

“Gilda’s Club [at Agape] is really in it for the long haul, even though to this point we haven’t had people come. We want people in the community to know that we aren’t going to abandon them,” Mingesz said.

She plans to work with local churches and others in the neighborhood to get the word out that Gilda’s Club is at the Agape Community Center to help people with cancer. A new schedule of programs will be offered there, beginning in March.

Until the flood, the local Gilda’s Club, like all Gilda’s Clubs in the U.S., held most of its programs at centralized “clubhouses.” Since it lacked the funds to repair the building, Gilda’s Club asked its parent organization for permission to give up the clubhouse and pilot a program at various locations in the community.

The parent organization granted permission, and Southeastern Wisconsin became the first Gilda’s Club to move all of its activities into other community facilities.

It is now also offering Spanish language cancer support in Waukesha at the Hispanic Community Resource Center, a department of ProHealth Care as well as programs at other locations throughout the area.

For more information about Gilda’s Club at the Agape Community Center, contact Justine at 414-962-8201 x102 or jlucore@gildasclubsewi.org. 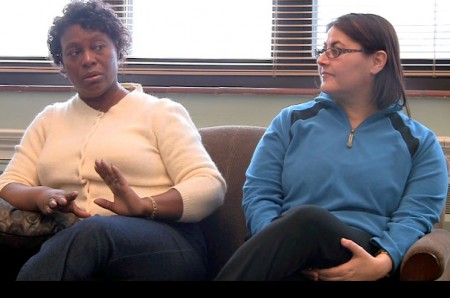 Reopal Holmes and Judy Lewy attend a meeting of the Gilda’s Club Wellness Group at the Jewish Community Center. (Photo by Andrea Waxman)