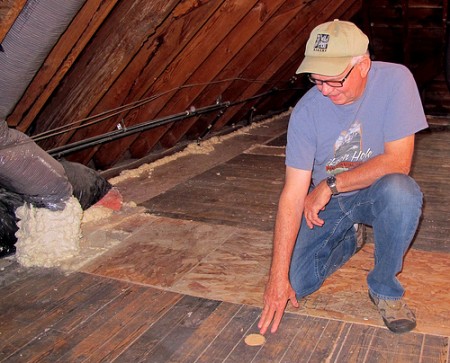 Homeowner Greg Mertens points to a new installation plug in his attic. (Photo by Edgar Mendez)

About a dozen years ago, Greg Mertens was looking for a new home and a new location for his expanding Wild Flour Bakery business. He decided on a 1925, brick, two-story house in Layton Boulevard West.

The only problem was that the building, like many other older homes in the neighborhood, was an energy waster. The energy in the home, much like the cost, was going through the roof, according to Mertens.

That has changed since Mertens took advantage of the city’s Milwaukee Energy Efficiency (Me2) program to help him finance insulation in the attic of his home last year.

Me2, a federally funded program available to all city residents, is intended to help home and business owners finance energy efficiency upgrades such as insulation, air sealing and new heating equipment, among other improvements, according to the city website.

The program will be marketed heavily to Layton Boulevard West homeowners, as well as those in Lindsay Heights, Thurston Woods, McGovern Park and areas around Lincoln Park in the coming weeks, according to Erick Shambarger, coordinator of Me2 and other environmental sustainability programs for the city of Milwaukee.

This spring the program will provide homeowners of one- to three-unit buildings with a low-cost energy assessment for $50 for single-family homes, and $100 for duplexes and triplexes, according to Shambarger.

The professional assessors focus on appliances, windows and insulation among other common energy wasters in older housing stock such as LBWN’s, according to Will Sebern, community outreach manager for Layton Boulevard West Neighbors, one of the groups coordinating recruiting with the city. 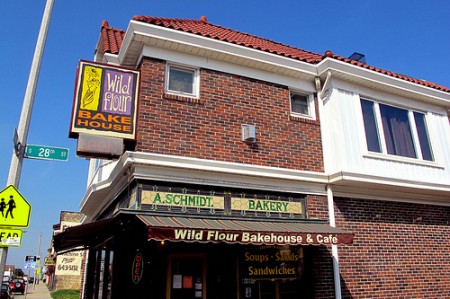 “Most of the homes here were built around the turn of the century and are not tightly insulated or sealed, which leads to huge energy bills,” Davis said.

With that in mind, the assessor tests the airflow in at the house and develops a plan for energy-saving repairs and an estimate of how much money could be saved, Sebern said.

Homeowners are then paired with a participating financer, who offers a low-interest loan with no down payment for repairs, Shambarger said.

If a homeowner decides to go through with the repairs, the assessment fee is refunded and the homeowner is also eligible to be reimbursed up to $2,000.

A 15-24 percent reduction in energy use could earn homeowners $1,000 cash back while a 35 percent or more reduction in could result in a $2,000 reimbursement, according the Me2 website.

The program also includes the services of an energy advocate, whose role is to work with participating contractors and consultants to ensure property owners receive the maximum financial incentives.

Mertens said he benefitted greatly from having the help of an energy advocate.

“The advocate checked the contractor’s work, and made them come back and do additional work on my house,” Mertens said.

Financial incentives could include other local programs that can be used in conjunction with Me2, according to Shambarger.

One such program is the Targeted Investment Program (TIN), which serves sections of LBWN or Habitat for Humanity’s renovation program, which serves both LBWN and Lindsay Heights.

TIN was designed to sustain and increase owner occupancy and strengthen property values.  Habitat for Humanity renovates homes in selected areas of the city.

The concentrated effort to notify residents about the Me2 program includes visits to local churches and canvassing targeted blocks in Layton Boulevard West.

In Lindsay Heights, organizers are also canvassing, as well as visiting parent-teacher events at Hopkins Lloyd community school and North Division to get the word out about the program, according to Davis.